We started Les Figues Press in 2005 to publish the TrenchArt series. In other words, the idea of the Press was the idea of the series. Or, simply put: we wanted to publish books as a conversation or group curation. As writers, we frequently discussed our work in terms of other people’s writing, even as our individual efforts were writing into, or against, a larger social inscription or text. This larger text could be what Charles Taylor calls the “social imaginary,” defined as “the ways people imagine their social existence,” including their expectations, relationships, and the “deeper normative notions and images that underlie these expectations” (23). To Taylor, the social imaginary is held together by the stuff of the imagination—images, stories, legends. If, as writers, we are making texts (poems, prose bits, novellas) in an increasingly networked world, what might our individual works, placed side-by-side, reveal about a social imaginary, which is also in/forming these individual texts? Fred Moten, in a talk at the University of Denver, refused to talk about writing “beginning,” because writing, he said (and I’m paraphrasing) is simply a way our ongoing sociality sometimes emerges. Writing, in other words, is a form of sociality. Writing never comes from one alone.

When we founded Les Figues, we (or to be exact, I) did not have this language for writing. Yet demonstrating this intuitively-held relationship between individual texts—and the larger social text—felt worthy of publishing. Vanessa Place, Pam Ore, and I had been talking about this “something” we wanted to make for a few years, and one afternoon we imagined a publication structure: TrenchArt. (Teresa Carmody, “For What Reason Is This Writing: Publisher’s Preface”)

I’m amazed by the remarkable anthology trenchart monographs hurry up please its time (Los Angeles CA: Les Figues, 2015), edited by Teresa Carmody and Vanessa Place, an anthology collecting nearly a decade’s worth of publications created as part of the TrenchArt series produced by Les Figues Press. As Carmody’s introduction explains, the original TrenchArt essays, grouped together to be published as short monographs, were the origins of the press itself: to present work as a conversation, and works that would have no home anywhere else. Moving beyond those first, small publications, Les Figues is a press that has evolved over the past decade-plus to be one of the leading publishers of innovative, experimental and conceptual writing in North America, producing book-length works by Jennifer Calkins, Vanessa Place, Redell Olsen, derek beaulieu, Sophie Robinson, Timothy Yu, Claire Huot and Robert Majzels, Colin Winnette, Sawako Nakayasu, Doug Nufer, Urs Allemann, Dodie Bellamy, Sandra Doller and multiple others, as well as producing another important anthology: I’ll Drown My Book: Conceptual Writing by Women (2012) [see my review of such here].

Depictions of the present are complacent; depictions of the future are implausible. For this reason, depictions are generally unimportant, unless they are made by important people like economists or real estate agents. These important people describe only the future, which they make sure is boring and plausible. A plausible future is just more of the present. The Empire never ends because the people in it are more important than the world that they deserve. Better to have a world that exists than a world that is better but might rock the boat: this is a good general view. Because if you rock the boat, the boat will take on water, and it might well sink. There are already people drowning in the bottom of the boat. Poetry succeeds as if the boat can lift off from the water and become an airy structure, with a few words surrounded by wide open space where the sun gleams off-white. This is not an important thing for the world to be able to do; it is not an important thing to be able to do with the world. Turn it into an essay where the dead things of the present are nailed to a bulletin board: that is at least a little bit useful. I’ve nailed every dead bit of my ego to this bulletin board that you have just read, and illustrated each one with a corny metaphor. Enjoy. I’ll see you in the future, or else in an extrapolative satire, or else I won’t see you. You are too important to be able to get out of this present world that wants to be with you till death. (Stan Apps, “On Unimportant Art”) 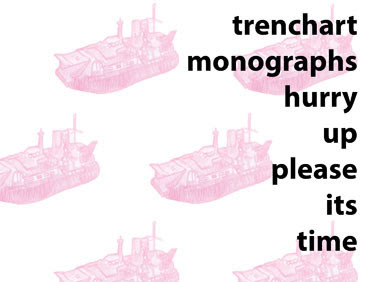 What of the making of things together? Collaboration. We get together to make a thing, a thing that will trigger an uncanny shift of perception in those who see it. This shift will expose a particular societal delusion so ubiquitous as to have been previously invisible. This object we imagine will perpetuate an act of radical haunting, that awakens the viewer to the world around it, but its success depends wholly on our collaborative BOO. I show up as Boris Karloff but my collaborator was hoping for a more Henry James-like spooking. Her laugh is not fiendish enough. He thinks my cape ridiculous. There is always a gap. We mind the gap fastidiously, obsessively. It is not what I had envisioned. My collaborators have deprived me of the sight I’ve grown used to. They have haunted my haunting … generously. “Have you ever really looked carefully at the thing we are making?” they ask. (Susan Simpson, “Untitled Aesthetic”)

As Place points out in her introduction, “[…] Les Figues Press was also born from a women’s art salon, Mrs. Porter’s, held most regularly from 2004 until 2013 or thereabouts. Everyone who attended presented some item for aesthetic contemplation (one’s own or another’s) during the first half of the evening; the second half was devoted to teasing out connections and distinctions between the works. To a consideration of how these scraps of writing or bits of art might tat together, not a telos, but an essay. As in essaie, as in try. Try as in trial. The trail, of course, in the TrenchArt series, was the work itself.” An anthology of this sort functions as a curated montage of divergent ideas on approaches to writing, attempting to prompt new ways of thinking about how writing is created, presented and absorbed, and there is a great deal within that can’t help but to startle the attentive reader into seeing writing in a potentially new way, whether their own, or simply writing in general. A book such as this wants to shake the complacency out of so much of what is currently being produced, disseminated and absorbed and somehow called “writing.” The possibilities are far larger than what most writing might suggest, and perhaps more (including myself) should be better at paying attention to the writers who are working to continuously push at the boundaries.

My art is guided by history: art history, social history, political history, and personal history. The historical and the personal are inextricably linked, like two sides of the same sheet of paper. My work is about how memory itself is political, and the process by which the political is transformed into memory.

I am driven by an urge to retrieve something lost or something that will soon be lost. Walter Benjamin has written about this impulse to return to the past in order to rescue it from disappearance. In his Theses on the Philosophy of History he says, “to articulate the past historically does not mean to recognize it ‘the way it really was.’ It means to seize hold of a memory as it flashes up at a moment of danger.” In uncovering the historic in my work, I don’t mean to tell the story, but rather I am interested in telling a story—something highly constructed and subjective. In rescuing and remembering the past, the work allegorically reinvents meaning—a new story is told. (Molly Corey, “Aesthetic/Politic”)

One of the more intriguing of an already-impressive gathering of exploratory pieces is Lisa Darms’ erasure essay, “½ EARTH ½ ETHER,” a piece she attempts to salvage through the process of erasure. As she writes in her “Postscript: Under Erasure” (dated 2014):

When I was asked to republish this essay, I thought of it in terms of my job as an archivist. I knew I’d probably be embarrassed by my writing, but that it would be a way to enact my belief that the highest function of the textual archive is to preserve mistakes, imperfections and failures.

The archive documents failure, yes. But it doesn’t have to perpetuate it. This is the voice of someone who, after three vaguely demoralizing years in a studio art graduate program, has spent a year unable to find work, reading only holocaust memoirs and back issues of Artforum. The original essay’s stylistic pomposity and its humorlessness are qualities I’ve spent the last eight years trying to purge from my writing (and life). My first inclination, when I saw this essay in proofs, was to kill it.

But instead, I decided to retun it with extensive redactions—a sort of faux-bureaucratic disavowal of the more facile ideas, and an homage to the sharpie marker sous rapture of riot grrrl zines. I’ve found that the essay now expresses its stuttering logic more accurately. Because we don’t want to stop time; we want to reanimate it.