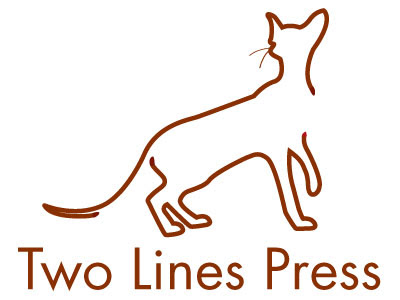 CJ Evans is the editorial director of Two Lines Press and the author of A Penance (New Issues Press, 2012), and The Category of Outcast, selected by Terrance Hayes for the Poetry Society of America’s chapbook fellowship. The recipient of the Amy Lowell Poetry Traveling Scholarship, he recently returned to Oakland from Aix, France.

1 – When did Two Lines Press first start? How have your original goals as a publisher shifted since you started, if at all? And what have you learned through the process?
Two Lines Press ‘started’ in 2013, but we grew out of Two Lines, a journal of international literature in translation begun over 20 years ago by Olivia Sears, our founding editor. Doing books, itself, was a expansion of the original vision. When Olivia started the journal there was almost no attention paid to the contribution of translators in literature, and she wanted to highlight their work. Over the past two decades there has been a pretty strong shift (although not as far as we would like) in the attention paid to translators and international literature, and books seemed like a logical next step in the conversation for us.

3 – What do you consider the role and responsibilities, if any, of small publishing?
Small publishing is less, in my opinion, about roles and responsibilities than it is about opportunities. We are not beholden to the expectations or excuses of editors at the larger houses. We can make the decision to highlight non-traditional narratives, to publish more women, more minorities, more LGBTQ individuals without feeling it’s necessary to ‘justify’ those decisions. We can publish the books we want to publish, that fit with our ethos and where we want to drive the conversation of literature.

4 – What do you see your press doing that no one else is?
Our goal is to publish excellent international literature and to highlight the artistry of the translator in a way that’s both sexy and unapologetic. Translations are often looked at as ‘cultural’ documents: “here, read this book by a Catalan author, you’ll learn so much about Catalonia!” We don’t care if you learn about Catalonia, we care that there’s an amazing Catalan author, an amazing translator who brought the work into English, and that it’s an exceptional book. Full stop.

5 – What do you see as the most effective way to get new books out into the world?
If there’s a “most effective” way I’d love to hear about it. We put a lot of attention into our design and marketing. We do events, we send out ARCs, we pester reviewers and target new audiences for each title. We reach out to bookstores, we tweet, we do weird promotions and send our books in for awards. We started out doing only 3 books per year because we don’t want to move onto the next title once a book is published, but to continue to nurture the audience and attention for each of our titles.

6 – How involved an editor are you? Do you dig deep into line edits, or do you prefer more of a light touch?
Editing translations is wonderful, because I don’t have to worry about the macro-editing—the book is the book as it was written. But I love getting into the syntax, trying to tease out the tonal intention of the author and how to best bring that into English. Some books are more intensive in their edits than others, which has a lot to do with the challenges of the original language—it’s a lot more straight-forward to translate a romance language into English than, for example, Chinese, where you’re only very rarely certain of the tense of the original. I very closely scrutinize and question the choices in each book, but I also want to make sure I’m not pushing the translator to make changes they feel lack fidelity to the original.

7 – How do your books get distributed? What are your usual print runs?
Our books are distributed through Publisher’s Group West. We don’t really have a ‘usual’ print run—runs range based on pre-sales.
11– How do you see Two Lines Press evolving?
We don’t have any plans to “evolve” at this point (being pretty new) but growth, more attention, pushing the conversation are all certainly on our minds. We want to drive translated literature more into the conversation around books in this country. There’s no reason year-end lists, review outlets, etc. should be so American-centric. Awards should be more open to translated literature, there shouldn’t be one conversation about ‘books’ and another about ‘translated books’.

12– What, as a publisher, are you most proud of accomplishing? What do you think people have overlooked about your publications? What is your biggest frustration?
Denise Newman, who translated Baboon by Naja Marie Aidt for us this past fall won the 2015 PEN translation award, and Marie NDiaye’s Self-Portrait in Green won the CLMP Firecracker award for creative nonfiction, in a category where it was the only translated book against some real powerhouse American authors. That the small-press community and serious readers are taking note of us is really heartening, and whenever we hear that one of our books was a favorite on twitter it makes us immensely proud. Especially when it’s not ‘favorite translated book” or “favorite foreign book” but merely favorite book—that’s what we’re trying to build on and what makes us proudest.

13– Who were your early publishing models when starting out?
I’d point to New Directions and Grove as big influences. We want the model where we publish books that we think will have a life that will extend far beyond the 6 months they’ll be in the review cycle and build a backlist over the next 20 years that people will see have influenced the literature of the next generation.

14– How does Two Lines Press work to engage with your immediate literary community, and community at large? What journals or presses do you see Two Lines Press in dialogue with? How important do you see those dialogues, those conversations?
We often talk about our community. We have what we might call our ‘family’, which is translators and presses and bookstores who champion translation. Then we have the community that comes to our events—they’re some of my favorites. They have no skin in the game but just love good books and have come to trust us not to steer them wrong. Then we have the larger literary community, both here in SF and nationally (and internationally). I could name a million presses and journals, but what is most exciting and sometimes so frustrating about those communities is there’s so much passion for good work, and so much good work being done, that it can be hard to catch the ears. That’s why I think going to AWP, to PEN, to BEA, to Frankfurt, being a part of CLMP, to having coffee or lunch with people here in SF, or out in NYC when we go, or wherever we happen to be just stopping into bookstores or seeing who we can track down to meet. All our paths are heading in the same general direction, and I’ve found when we all talk, we tend to roll along a bit faster.

15– Do you hold regular or occasional readings or launches? How important do you see public readings and other events?
We do. We have a launch event for the journal every spring, which covers 2 issues, and usually have a launch here in SF for at least a few of our books. This fall we’re putting together a SF, an NYC, a Berlin, and an Amsterdam launch for Isabel Fargo Cole’s translation of Wolfgang Hilbig’s The Sleep of the Righteous, and we have Toni Sala, a Catalan author whose book The Boys translated by Mara Faye Lethem we’re doing in November, coming to San Francisco as well. Mostly we really love launch events because it’s a chance to meet people. To find out from the readers what’s bringing them to the books, how they’re finding out about things, what else they’re reading, and it’s a chance to let the authors and translators speak for themselves. We also run an event series, Two Voices, here in the Bay Area, and do everything from intimate salons in our offices to larger ticketed events. It can be lonely sitting in a room editing a book then refreshing the browser to find out if that review came in. The events give us energy.

17– Do you take submissions? If so, what aren’t you looking for?
We take unsolicited submissions all year round for both the journal and the press at www.twolinespress.com. We’re looking for projects where the translator has read at least one of our books and can tell me why they think this project fits in with what we do. We have a very specific editorial taste, which takes a bit of breath to describe but is crystal clear from what we’ve published. As with any press, I want the submitter to have put in at least as much attention to why they’re submitting to our press as they expect me to put into considering it.

18– Tell me about three of your most recent titles, and why they’re special.
Three recents:

1)      1) The Game for Real, byRichard Weiner. The translator, Benjamin Paloff, was out here a couple of weeks ago doing a launch event for us at the amazing Diesel Bookstore in Oakland, and we were talking about who might be similar authors to Weiner. He’s somewhere in between James Joyce and Samuel Beckett, with a bit of Gertrude Stein thrown in there. This is high modernism at its whimsical but difficult best. Weiner was a gay, Jewish, Czech modernist who wrote this book in the early 30s, and who has never been translated into English before. It’s heartbreaking (the main character’s name is, simply, Shame), imaginative, and sometimes devastatingly funny.
2)      2) Self-Portrait in Green, by Marie NDiaye, translated by Jordan Stump. This is the second NDiaye title we’ve done, both translated by Jordan. Her sentences are something to behold, they open from a single clause into long, nested, labyrinthine passages. Marie was solicited to write a memoir by a small French publishing house, and she wrote this untrustworthy exploration of a series of women in green—it’s one of the strangest and most beautiful books I’ve ever read.
3)      3) Baboon, by Naja Marie Aidt, translated by Denise Newman. Aidt’s stories are explorations of how people warp when the spotlight of tragedy or stress is put on them. She started out as a poet, so the prose itself is lush and deeply vivid (in no small part because of Newman’s wonderful translation) and the stories put you, as a reader, in a place where you’re sympathizing with characters that, as you read, morph into monsters.