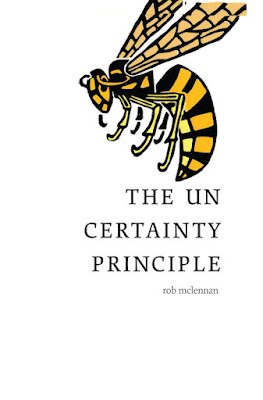 Hayley Malouin is a graduate student studying Comparative Literature and Arts at Brock University. In her final undergraduate year, she conducted this interview with rob about his recently published collection of stories, The Uncertainty Principle, as part of a creative writing class taught by Prof. Natalee Caple. Hayley also works as atheatre critic and editor at DARTcritics, a blog devoted to new and diverse critical voices created by Prof. Karen Fricker.

1.    Some of these stories were originally tweets. What do you think the connection between short story writing and social media platforms is? Do you find Twitter to be an inspiring or creative platform?

I had enormous fun composing those stories, and found the constraint of 140 characters both exhilarating and rather tricky. Just what can you pack into a small space? Given that the entire collection works on that very idea, working to boil down even further became an interesting experiment. I wrote quite a number of pieces, composing rather quickly and posting directly to twitter, but only a half dozen or so made the final manuscript.

I actually wrote about the process of composing for twitter on my blog, here: http://robmclennan.blogspot.ca/2012/08/how-to-not-be-on-twitter.html

2.    There is a certain brand of Canadian fiction that you call ‘retelling’. How do you feel your work positions itself in relation to this kind of national storytelling?

There is that one story that does deliberately reference a certain kind of Canadian stereotyping when it comes to fiction, which was far more prevalent in the 1960s and 70s. Somehow, some of these ideas still linger here and there, and I simply wanted to reference some of those continuing stereotypes.

‘National storytelling’ – what does that even mean? We tell our stories from the perspectives we understand, but not all stories from all regions are going to be the same. There might be some overlap, certainly, here and there, but the diversity of stories and the ways in which they are told are simply not acknowledged nearly enough.

3.    Do you feel that living and working in Ottawa has consciously politicized your work? Phrases like “A parliament, of owls” and “An army, of herrings” lean towards political commentary. How important is this to your fiction and non-fiction work?

Proximity to Parliament Hill, even with my twenty years of living in Centretown, hasn’t changed a speck of my work. Living in Ottawa has never meant anything in regards to the political being any more prominent in my day-to-day.

If I’ve begun to weave the political into any of my writing over the past few years, it has been through my frustration with the seismic shifts that Stephen Harper’s Conservatives have made in policy and action, moving further away from a Canada that I even recognize. His Canada is not mine.

4.    The Uncertainty Principle almost reads like a collection of poems. What motivated you to move from writing poetry to writing short stories and novels? Are these connected for you? How are they different?

One could say everything I do is connected, even if only through being written by the same hand. I’m sure there are connections somewhere. This is actually my third work of fiction (not including a third novel completed before this book this was published), and I’m already working on two further collections of short stories. I’ve always been interested in the possibilities of other forms. It might read like poems through the lyric brevity, but I see them very much as fiction: they’re built in full sentences, and tell a series of linear narratives.

Back in the late 1990s, when I started focusing more on fiction (after nearly a decade of focusing on poetry), I noticed that utilizing a new form meant that the ‘storytelling’ aspects began to fall away from my poetry, which I found rather interesting. It allowed my poetry to move in other directions.

5.    Is there anything you are afraid or hesitant to write?

There are some elements of the book that speak to the intimate, such as the story about no longer believing my mother. I wasn’t necessarily afraid or hesitant, but using more intimate material pushes me to work far harder to get the story just right.

6.    After having these stories compiled from your Twitter account, blog, etc. do you find that you have received a different type of critical reception? How is online criticism different from traditional print criticism?

To put my work in only one form or place, whatever that might be, automatically reduces my audience: it presumes that anyone can only interact with my work by going to one place. It would be the same if I were to ignore print journals over online, or the other way around. For the same reason, I often review for print and online journals beyond my own blog: I can’t presume that everyone is going to come to me to read whatever it is I’m on about.

Having said that, I don’t think the criticism is any different at all. The form and forum is simply a tool in which to present and disseminate the work. The same argument applies via print books vs. e-publications. It’s all just reading.

I think any writer should always work to publish in a variety of media far wider than they themselves might actually use. One shouldn’t presume that any reader that wants to read your work has exactly the same reading habits that you do.

And the pieces weren’t “compiled from” in any way. I work on book-length projects, and then send pieces out into the world as appropriate, including sending out to journals, selecting chapbook-length manuscripts and even posting the occasional piece on the blog. The book is the main project, and not a matter of accident after the fact.

7.    I can’t help but be reminded of bell hooks by the characterization of your name - rob mclennan. Why do you choose to not capitalize your author name? Does it serve as a kind of nom de plume that separates you from your work?

Originally, back in the early 1990s, my logic was two-fold: I wanted to minimize my name in a certain way, to make the focus on the work and not me, and the fact that I think it looks far better than “Rob McLennan” – the lower case looks far more sleek. I wonder, too, if I might have been working to differentiate myself via writing from the rest of my family (a normal element of being in one’s twenties, I’m sure).

8.    Why do you choose to self-publish online as well as through traditional publishers? What are the benefits of publishing online?

Self-publish: are you referring to posting occasional poems and short stories to my blog? The benefits of online publishing, generally, mean that the work can go much further than traditional print means, and the effects are immediate. For years now, my blog has been getting upwards of 1,500 daily ‘hits,’ which means that anything I post to my blog is going to get a far wider audience, both in terms of numbers and geography, than most trade literary journals in Canada.

9.    Has the rise of the blogosphere and ‘blogger’ as a job title in any way impacted what you write and how you publish it?

Yes and no. After writing reviews for a weekly paper for four-and-a-half-years, I originally began my blog so I could focus more on writing than on chasing venues for errant reviews and essays. The forum has allowed my critical skills to develop considerably (I’ve since published two collections of critical essays, for example). I do like the immediacy of the blog: I can publish a review of a new poetry collection within a week or two of the publication date (sometimes earlier), instead of having two wait for print journals to catch up, sometimes six or even twelve months later. A review posted online can be utilized by both author and publisher, and help push attention towards a brand-new publication. This seems far more useful than a review months later. Although, having said that, there are benefits, also, to a review posted months later: usually the reviewer/critic can go far deeper, allowing for a larger critical study of a particular work. I focus predominantly on the relatively-quick piece, to help push the book as it begins its published life.

Also: I’ve never used such as ‘job title.’ I’m a writer: that encompasses all.

10.  Your stories are inundated with pop culture references, both old and new. Are there challenges in weaving pop culture into such short stories?

I don’t see this as a challenge. I exist in the world, so why shouldn’t my writing reflect that?

As Gertrude Stein apparently said: write of the world you live in.