She babbles with sprouting fists, sounding
the language of her hands with grunts.

A flashcard is shown: it’s of ice cream on a cone.
The text beneath reads “Ice Cream.”

The child motions to lick—
the mouth referencing the hand

Someone said no correspondence exists
between the structures of speech and sign.

I find the subtleties to Hmong-American poet Khaty Xiong’s first poetry collection, Poor Anima (Berkeley CA: Apogee Press, 2015) intriguing. “The first cut is traditionally the last memory,” she writes, in “Thursday,” “the thing never dreamed.” There is such a fine line between poems that occasionally appear straightforward to the point of empty, and an unbearable depth, as she composes lines that contain vast arrays of silences in short phrases. “You reach for me in the old language,” she writes, in the poem “Pavor Nocturnus,” “spreading / fingers to break the shadow, holding onto the darker throat.” The poems reference the trauma of war, Latin phrases, violence and exile, and the dislocations of language, culture and geography, as well as more mundane domestics that, in comparison, might seem a relief; and yet, even across the mundane runs a deep and dark shadow.

If one could study light in the way one might study the urgency of death, I want you to know it is unreachable. There’s a space beyond the threshold. It doesn’t know closure. Aren’t we lucky?

Still, there’s much to talk about.

I’m hoping you’ll wait for me to learn—so that you can tell me how killing has permitted you to live, embrace the conversation you started. (“Dear Father,”) 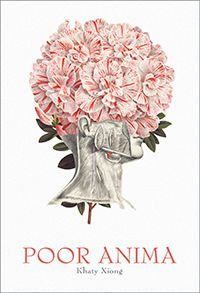 There is such a darkness that comes through this collection; a darkness, and a conversation attempting to push against such incredible silences, reaching out and beyond the darkness into an insistant questioning, and a relentless, curious optimism. In Xiong’s Poor Anima, the poems are almost muted in their expression (Elizabeth Robinson’s quote on the back cover warns: “Don’t be tricked into thinking that Xiong’s limpid language is the result of uncomplicated thinking”), walking a meditative line of questioning across an endless minefield of trauma. As she writes in the poem “Low-Grade”: “My parents’ slippage boils us down // to guesses. I can’t ask the right questions. How could I follow?” One learns to tread carefully, I suppose, or not at all. It makes me very curious to see where Xiong will end up; what will the poems eventually allow?

The spirit is dormant here. It dissolves
into ivory, sage, and river. In English,

the body is pronounced to bray, to throw
etymology the way names cannot carry persons.

Of course, it is honeybee, hibiscus, house.
The anthered-tongue tucked in your throat

blisters in yellow, abides the bloom.
It readies in gurgles, produces the pattern—

and still, they will say you are no flower,
you don’t belong here.