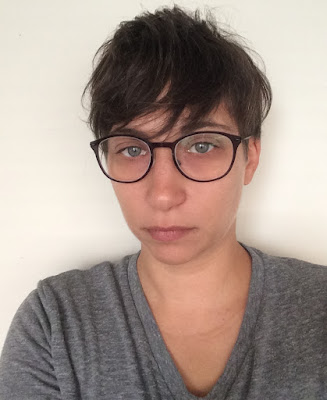 Syd Staiti lives in Oakland and is author of The Undying Present (Krupskaya 2015) as well as chapbooks Between the Seas (Aggregate Space & Featherboard Writing Series 2014), In the Stitches (Trafficker Press 2010), and Verse/Switch & Stop-Motion (2008).

1 - How did your first book or chapbook change your life? How does your most recent work compare to your previous? How does it feel different?
I feel more at ease now. I feel like I trust that I can write books. I think all my projects will have similar overall concerns but they'll look different and/or come at things from different angles.

2 - How did you come to poetry first, as opposed to, say, fiction or non-fiction?
I’m not so good with rules and conventions. Poetry gave me more permission to stray.

3 - How long does it take to start any particular writing project? Does your writing initially come quickly, or is it a slow process? Do first drafts appear looking close to their final shape, or does your work come out of copious notes?
Sometimes a piece comes together quickly but usually I’m pretty slow, especially in the beginning. Once the work starts to have a character of its own the momentum builds and I'll work a little faster. I wrote The Undying Present over four years and the final version has some fragments from very early drafts. I see those fragments as the parts that helped it along to becoming what it ultimately became. Little threads that held the thing together over the years.

4 - Where does a poem usually begin for you? Are you an author of short pieces that end up combining into a larger project, or are you working on a "book" from the very beginning?
I can't sit down and say "now I am going to write a poem" and then write a poem. I often have to trick myself into writing if I don't have something substantial already in the works. When I have written short poems they're usually with my next project in mind, like I'm brainstorming things or using them as stepping stones toward the larger work. I think I need to feel the possibility of expansiveness. Containment is not my thing. Neither is knowing in advance what I'm going to be writing.

5 - Are public readings part of or counter to your creative process? Are you the sort of writer who enjoys doing readings?
Yes I really enjoy readings. I especially like reading work that isn’t totally polished/finished but isn’t brand new either. For me readings are perfect for that work in the middle, work that has started taking shape but is still in formation. I like to feel how it takes up space in a room, hear it when it's floating around outside my head.

6 - Do you have any theoretical concerns behind your writing? What kinds of questions are you trying to answer with your work? What do you even think the current questions are?
I think the current questions vary depending who you ask. My own concerns and questions often deal with subjectivity, gender, narrative, memory, time, sociopolitical forces, struggle, individuals and collectivity, urbanism and environment, I don’t know I could probably go on.

7 – What do you see the current role of the writer being in larger culture? Does s/he even have one? What do you think the role of the writer should be?
I feel like I’m supposed to say something like public intellectual. But I think if a writer is really good at carpentry or gardening or parenting or healing, that’s great. It's all necessary. I can't see a single role applying to all, especially some kind of privileged role. Writers are just like any other group of people: many of them suck, some are alright, a few are really admirable people.

8 - Do you find the process of working with an outside editor difficult or essential (or both)?
I like working with editors. By the time work is in almost publishable form it can be sort of blurry. I've got all the layers of past versions ghosting the background so it's hard to see the current iteration alone. Editors are helpful because they are invested in the work being as strong as it can be, but they’re separate enough that they can sometimes see things more clearly than I can.

9 - What is the best piece of advice you've heard (not necessarily given to you directly)?
Someone once told me that Eileen Myles once said that if you don’t feel nervous before a reading then you’re not doing it right. You’re not risking anything.

10 - What kind of writing routine do you tend to keep, or do you even have one? How does a typical day (for you) begin?
I don’t have a writing routine. I can’t write if I’m not feeling it. Most of my writing is done on weekend mornings or afternoons because that’s when I'm the most open. I have a hard time writing in the evening after the accumulation of a day. My days typically begin with me waking up pretty early to read for an hour or two or go for a run (or if I can fit in both) before work. Weekends also start with reading, then writing, if I’m feeling it. Lately I haven't been feeling it but that's because I'm not totally into a new thing yet.

11 - When your writing gets stalled, where do you turn or return for (for lack of a better word) inspiration?
Films, books, walks or a run

12 - What fragrance reminds you of home?
I have a terrible sense of smell. I don’t know.

13 - David W. McFadden once said that books come from books, but are there any other forms that influence your work, whether nature, music, science or visual art?
films primarily

14 - What other writers or writings are important for your work, or simply your life outside of your work?
I read less poetry than I used to but I still read a fair amount of poetry/creative prose. I like taking on challenging or durational reading projects like Capital and all of Proust. I read a lot, lots of nonfiction dealing with race and queer issues and gender and revolution and histories (both global & in the us) that you'd never be taught in school.

15 - What would you like to do that you haven't yet done?
change my name

16 - If you could pick any other occupation to attempt, what would it be? Or, alternately, what do you think you would have ended up doing had you not been a writer?
occupation doesn’t mean much to me. I need a way to make money, that’s all. sometimes I dream of making money doing a thing I love but I wonder if that would make me love it less. if I wasn’t a writer I’d be a filmmaker. I have often thought over the years that I should’ve gone to film school instead.

17 - What made you write, as opposed to doing something else?
I don’t know, I was a pretty weird teenager. I felt out of place growing up on Long Island. I think writing helped me through that time. I didn’t think of it as something i could do in my life, or would do, as an adult. It was just something I did. In my early twenties I moved to Portland OR and was feeling like I was finding myself and was more comfortable in my surroundings but I kept writing. It wasn’t a need anymore, a way to connect to myself, it was more of a choice and an interest. I was writing a lot and reading some of my work at open mics and stuff and also obsessively reading poetry all the time so it finally clicked that I should probably try and take it seriously.

19 - What are you currently working on?
I’m not sure how to talk about it at this point. too new.