When? When will I remember? Not how. But when.

At first, I will remember every day. Maybe several times a day. Tomorrow, I will say it happened yesterday. I will remember yesterday. And then the day after tomorrow and after and after. For many days, I will remember. And then there will come a time when I won’t recall immediately how long it has been. I will count in my mind and on my fingers and only then will I know. Eventually, I will forget. I will forget for a very long time. It will lie dormant. And then one day the bus will be late; I’ll catch someone’s eye; I’ll hear someone catch their breath. And I won’t know whether it really happened—that moment—or whether I had been waiting for an excuse to make it happen. But then it won’t matter. I will remember this.

I want to know how long I have to wait until I remember again. 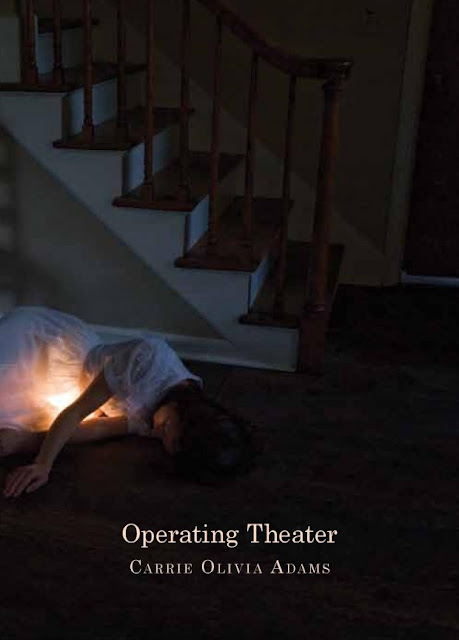 Chicago poet, filmmaker and editor Carrie Olivia Adams’ third poetry book, after Intervening Absence (Ahsahta Press 2009) and Forty-One Jane Doe’s (book and DVD, Ahsahta 2013), is Operating Theater (Buffalo NY: Noctuary Press, 2015). In her published work to date, Adams’ work has resisted adhering to any particular structure for long (note that her previous book includes an accompanying DVD), and this new work explores both the structure of theatre, medical information and language, and implications of the body. What is interesting about the way she approaches genre and form is in the way she blends projects together into bundles, such as producing a film work to accompany a poetry collection, as opposed to stand-alone projects simply influenced by structures outside the normal bounds of her particular genre.

You can cut open my mind
and see its figure traced there,
the patterns of those memories, a forest.

You can cut open my chest
and out of it
into those surgical lights
the seed will grow.

In an interview conducted by Ryo Yamaguchi, recently posted at Michigan Quarterly Review, she describes part of the compositional process of this book, writing: “As much as I’ve always enjoyed experimenting with form (I seem incapable of just writing a poem-poem, some self-contained thing of a handful of stanzas and lines), I think I’ve always also been fascinated by the idea of the theater, not the idea of performance, which I think is the concept de rigueur, but very much the construction and conception of the theater itself.” It is as though she writes from a stage, utilizing the entire space as a singular, open-ended performance; one constructed by fragments of monologue, prose-poems and a shift of perspectives. Later in the interview, she states:

I love the idea that once upon a time people could be experts in multiple disciplines. […]

To state it simply, both poets and scientists are trying to find/make language to understand the world; taxonomy and poetry are siblings. Indeed, they are modes of inquiry, of ordering, structuring, and understanding. I, perhaps in part, gravitate towards the authority that science gives to ideas (a weight the lyric mode, which exists in worlds real and unreal, does not carry). I am attracted to logic, even the syntactic structure of proofs. And I like to find ways to balance my inclination toward intuition with reason.

To open the third section, she writes: “I wanted to give my life back, / so I decided to cut it into pieces. / For you, a limb. For you, some marrow. / Is it easier to grasp?” Operating Theater is a collage-mix of fragments, prose sections and stage direction, blending both the medical and performance space of the “theater,” and asking a series of questions from, towards and to the body. Further in the same interview, she writes:

I think I’ve been kicking at the mind/body problem for as long as I can remember. Often, it’s been about a desire to shed or lose the body. I think to some extent it’s a gendered desire. It’s this woman’s body that gets between the world and the person. It’s this body that causes, without invitation, conclusions to be drawn about its owner.  The body dictates how the body’s wearer is treated. So the speakers of many of my poems have often been trying to reject their own bodies, and yet, at the same time, the speakers are reliant on the body; it’s tactile, concrete connection to the world and what’s immediately real and present. There are no poems without the senses. For me, in the end, it’s less about a hierarchy of the mind over the body, but a constant conflict. They are enemies and best friends; they are both the mediums for taking in and making sense. And they are both where the memories are stored.

This is an expansive, intimate and entirely physical work, and one that exists equally on stage as it does within the boundaries of a printed book. “It is a burden. //// To be loved.” she writes.