I believe in Antarctica the way I believe in God’s white palm. The way it brims with snow. The way the night ice is new to the morning ice. I believe that the moon shines down on a union, that somewhere in this tundra two are frozen into one.

Some day: I believe in that day.

In my life, a desperate insect drags lint across the living room floor.

Not a single memory fills me. I remember the beach. The flags we covered ourselves in. The beer we drank. No snow. The sky pretended to go on forever but stopped just beyond the eyes.

Forever was only an idea then, something someone said to someone and both quickly forgot. Waiting there for us. 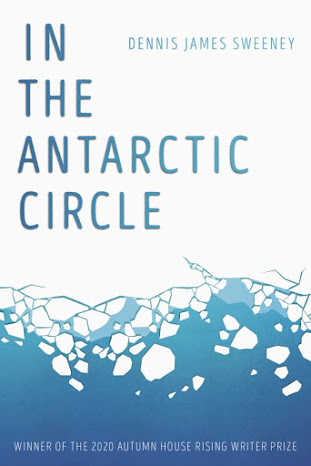 Amherst, Massachusetts poet and editor Dennis James Sweeney’s full-length poetry debut is In The Antarctic Circle (Pittsburgh PA: Autumn House Press, 2021), a book of absences and solitudes reminiscent of the geographic lyrics of Ottawa poet Monty Reid’s The Alternate Guide (Red Deer AB: Red Deer College Press, 1995), with both titles writing out alternate takes on specific geographic locales across a contained stretch. “Scan the snow for objects of love and wonder.” Sweeney writes, to open “74°0’S 108°30’W,” “Boil seal meat, stirring / with both arms.” For Reid, the boundaries of his specific map were the province of Alberta, and for Sweeney, he writes the Antarctic circle, but one as a space of shadows, legends and imprecisions. He writes an open space upon which the emptiness allows him to mark and remark as he wishes, putting on his own particular imprint, writing love, heart, hearth and environmental crisis. How does one love during a crisis? How does one allow a benefit of doubt? Even the shadows, one might say, betray. As “76°20’S 124°38’W” writes: “You will learn: Negative sixty degrees is not absolute zero. // You will learn: In a whiteout you cannot see shadows, but that does / not mean the edges are not there.”

Let’s suppose the world never ends. Let’s suppose we’re here into perpetuity, cooling heels at the rim of the great gone-cold hot tub. I throw in the towel. It begins to sink. Hank dives in, reaching one heroic hand out of the water where he’s drowning, the towel clutched in it. Soaked. Drying for only a moment before his weight pulls it down to the bottom.

We enact the cycles. We buy in, whether we want to or not, to biotic recursion, watersheds, the boogaloo. But we haven’t forgotten silence, not with as much armchair in front of us as we’ve got. The silence doesn’t circle. Rather lurks, impatient, then jumps on whatever slows. (“67°31’S 64°37’W”)