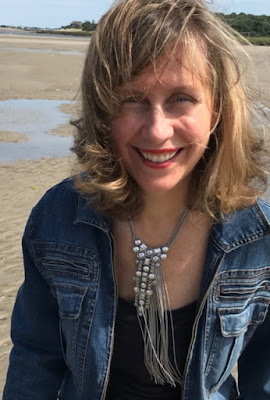 Dzvinia Orlowsky [photo credit: Jay Hoffman] is a Pushcart Prize poet, translator, and a founding editor of Four Way Books.  She is also the author of six poetry collections published by Carnegie Mellon University Press including her most recent, Bad Harvest, published in October 2018, and named 2019 A Massachusetts Book Awards “Must Read” in poetry; Silvertone (2013) for which she was named Ohio Poetry Day Association’s 2014 Co-Poet of the Year; and Convertible Night, Flurry of Stones (2009) for which she received a Sheila Motton Book Award.  Her first collection, A Handful of Bees, was reprinted in 2009 as a Carnegie Mellon University Classic Contemporary. Her translation from the Ukrainian of Alexander Dovzhenko’s novella, The Enchanted Desna, was published by House Between Water in 2006, and in 2014, Dialogos published Jeff Friedman’s and her co-translation of Memorials: A Selection by Polish poet Mieczysław Jastrun for which she and Friedman were awarded a 2016 National Endowment for the Arts Literature Translation Fellowship.  She is a founding faculty member of the Solstice Low-Residency MFA Program in Creative Writing of Pine Manor College and teaches creative writing at Providence College.  Her poem sequence “The (Dis)enchanted Desna” was selected by Robert Pinsky as the 2019 co-winner of the New England Poetry Club Samuel Washington Allen Prize.

I went from fuzzy, expendable almost-author to having a shelf life.

I never left my obsessions. Or rather, they never left me. I still write about growing up first generation Ukrainian; my Catholic upbringing; the body, both pleasure seeking and lethal.

I’m experimenting more with tonalities (humor and sorrow) and poetic forms that make up a singular, collective voice.

I was drawn to the “sound sense” (rhythmic and tonal links) of a poem. As a child, listening to recordings of Edgar Allen Poe’s poems gave me goose bumps, even though I often had no idea what he was talking about. But I never got over those sad, uncertain, rustling purple curtains.

To answer the first part of your question:  as long as it takes for me to get out my phone or laptop and type some words. The subject, or rather, the feeling behind a subject comes lightning fast. Shaping that subject into art—something worth a reader or listener’s attention—comes quicksand slow.

I don’t take copious notes. But I’ll have dozens-plus, draft files. I have to see what the poem might look like right from the get go. So even if the right words aren’t yet in the right order (modifying Stephen Dobyns here), I already feel them as couplets or tercets or prose poems.

Even though sound play was seminal in how I sensed a poem, for me a poem usually begins with an image, its imaginary radiance (Gaston Bachelard): “When the image is new, the world is new.”

If I draft, let’s say, 6 poems that can’t seem to live without each other, that often signifies that there’s a manuscript starting to take shape. It could also be a poem sequence or a chapbook, but often it’s not.

Early on, it’s counter. I’m vulnerable, and the poems haven’t fully shaped themselves—they’re vulnerable in my propensity toward fussy, premature editing. But once I have a handle on a small group of poems/prose poems that feel solid in voice and intention, I’m fine.

I love giving readings. But I’m a nervous wreck before them. Even after decades of doing it.  But I celebrate that polarity in artists:  complete confidence joined at the hip with interminable self-doubt.

To have the emotional truth/s behind my poems shape my voice— even if, at times, it/they seem/s contradictory—rather than have what I think is my voice shape those truths on the page.

part 2:  Does this word/line/stanza/paragraph make sense?  Is anyone going to want to read this?

part 3:  Does this word/line/stanza/paragraph make sense?  Is anyone going to want to read this?

E.B. White said it well, (although I don’t agree with his feeling about poetry and politics):

A writer should concern himself with whatever absorbs his fancy, stirs his heart, and unlimbers his typewriter. I feel no obligation to deal with politics. I do feel a responsibility to society because of going into print: a writer has the duty to be good, not lousy; true, not false; lively, not dull; accurate, not full of error. He should tend to lift people up, not lower them down. Writers do not merely reflect and interpret life, they inform and shape life.

I believe writers should actively engage with one another’s work, e.g. reading works in progress, if asked, and giving feedback. Find the flames that are worth fanning. We all need help from trusted readers.

Cynthia Lamb, Senior Editor at Carnegie Mellon University Press, is amazing. She catches errors and unclarities that I’m not able to see.  Director, Gerald Costanzo, questions poems he feels don’t belong in a particular manuscript, but neither overpower nor try to change the overall manuscript or my voice. So, I’d say:  essential, and I’m grateful.

10 - How easy has it been for you to move between your own work and translation? What do you see as the appeal?

Not as easy as I would have hoped. I was raised fluent in Ukrainian, but when I was older, I realized my Ukrainian had a lot of Polish mixed in with it. By the early 1970’s, the common language in the USSR was Russian. I found myself fluent in a Ukrainian that, as my parents’ generation began to pass, no one spoke. That made translation more challenging for me.

The appeal of translation lies in the ability to get under the skin of someone outside of yourself—that mutual understanding is possible.

A typical day for me begins and ends with prayer. That’s when, to reference James Wright’s timeless poem, A Blessing, I “step over the barbed wire into the pasture”.  Transitions are always, on some level, difficult for me—even for something as basic as day passing into night and night into day. There’s a sense of something being left behind, the uncertainty of what lies ahead.  A deep awareness of change—of physical, emotional and temporal boundaries—and how they equate with displacement and identity is a large part of my “immigrants’ daughter” psyche.

I often write late at night when there’s less possibility of being interrupted.

I pick up a favorite poetry collection, read a loud a favorite poem, and pretend I wrote it. It re-ignites all the pilot lights put out by self-doubt.

I’m a sucker for piano concertos—the phrasing—all those pleading questions and withheld answers.  Brahms and Saint Saens break my heart, as does the most memorable writing.

I grew up in rural Ohio, south of Cleveland, on 10 acres of meadow.  My mother, who could barely speak English, didn’t believe in playgroups, dismissing unnecessary mingling with American kids. My sister, an extrovert, and I, an introvert, had to rely on each other to entertain ourselves. We spent a lot of time outdoors pursuing our individual fantasies. Looking back, despite the crippling shyness that accompanied me well into college, I’m grateful for the opportunity to have nurtured an abundant inner life.

Regarding human nature:  I recall poet Franz Wright once saying to me:  “I’m interested in the moon in a man, not the man in the moon.”

I’d love to work on a collaborative theatre project incorporating my poems in some way.  If anyone is interested, contact me!

If I couldn’t write, I would’ve loved to have become a competitive ballroom dancer or a music historian.

I’ve been told I have perfect pitch, but I can’t carry a tune to save my life.  Every piece I play on the piano ends up sounding like a march.   So goodbye to a music career as performance is/was mandatory for a music history degree.

Dancing?  Early indications pointed to a dancer’s body, but I wasn’t any good at ballet.  When I plied, it was as if weights were attached to my hips.  And I’ve been criticized for leading too much in partner dancing.

Mainly, I’ve always been drawn to the written and printed word.  I kept lengthy detailed diaries throughout my childhood and well into my college years.

Too hard to narrow down to one book.  But three that I find myself re-reading passages from for various reasons include:

What we Live For, What We Die for: Selected Poems by Serhiy Zhadan; Translated from Ukrainian by Virlana Tkacz and Wanda Phipps.

Why Mahler?: How One Man and Ten Symphonies Changed Our World by Norman Lebrecht

I have several groups of poems in their earliest stages that may turn into longer sequences or manuscripts.

But the longest sequence which I recently completed is titled “The (Dis)enchanted Desna, after Alexander Dovzhenko” (20th c. Ukrainian film director and literary stylist).  It is based on Dovzhenko’s original novella titled The Enchanted Desna that I translated from Ukrainian and published in 2006  (House Between Water Press).  This sequence re-imagines Dovzhenko’s beloved, boundless Desna River Valley in a time of Putin.

Last year the sequence was awarded co-winner of the New England Poetry Club Samuel Washington Allen Prize selected by Robert Pinsky.  That provided enormous encouragement to keep going with this project.  I’m excited how this might develop into a full-length manuscript.