FINALLY, A POEM CLASSY ENOUGH TO BE ‘UNTITLED’

I frantically gulp ketchup.
You fill my room with MLM supplements.

Finding the long-coveted Pearl of Pettiness,
I develop a taste for bitters.

Please, the spectators weep, no more,
as I serve them yet more spoonfuls of honey mustard.

My revenge will be sweet
and sour,
I hear myself announce in a dream.

I fling salsa con queso.
It sticks to the night sky. 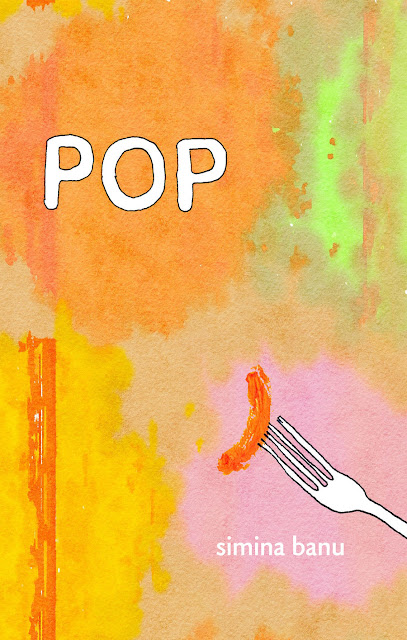 With two chapbooks under her belt (including one by above/ground press), Montreal poet Simina Banu’s full-length debut is the poetry title POP (Toronto ON: Coach House Books, 2020), a collection of first-person lyrics and visual structures that allows for the pallor of sketchbook or work-book. Moving through a variety of poem-structures, including more traditional lyric structures, prose poems, drawings and visual poems, Banu becomes the explorer, fearlessly pushing out into the unknown. As she writes in “SHARKEY’S DAY,” “I turn around, it’s fear! / I turn around again, and it’s love!” She isn’t afraid of exposition or exclamation, and there is the energy throughout as though Banu is feeling out where her poems might be going, and with something very much at risk through the process. She writes on earworms, Ariana Grande, cloudbursts, epics and Pringles, writing on love and food, and the intricacies and interrelations between, offering both popular culture and electrical pulses in poetic form as the two sides of her “pop.” “your standup / knocks me / out doors / windows / of course / there is no real harm / your stand / up knocks me / down uproariously” she writes, in the poem “Special.” There are moments I would have liked Banu to go further in certain of the directions she’s started to move in, but this is but opening salvo; I want to see where else her poems might move. I like where she’s headed. In her statement included as part of her January 2020 “Spotlight,” she wrote:

At some point during the last year, I noticed that I had accidentally begun writing a lot about food. In my attempts to convey various emotional peaks and valleys, a Cheeto, or perhaps some kale, would inexplicably spring into a poem. I’ve come to see that they (the poems; I don’t have the foresight to predict their tricks) weaponized food, relied on it to evoke the fitful and ever-changing power dynamics of doomed love. There is a purity associated with certain foods, and an impurity with others. And what does it mean when the communal activity of eating is divided on these lines? What does it mean to choose un-health not out of necessity but out of retaliation, even when all parties know that bag of Lay’s—or that passive aggressive “fine”—isn’t doing anyone any favours? Most importantly: how does one have a true food fight across a page to create maximum mess?