Julia Bloch, The Sacramento of Desire

Ovulept: the anthropogenic restructuring of ovulatory time by lungful emissions, endocrine disruptions, hazy particulates. Also: the reshuffling of markers of ovulatory time by thwarting, mediating, stalling, or occluding via market-based postures toward temporality as a condition for subjectivity or livedness or duration. Ovulation split into commodities: egg as service, mucus as surplus, odd cells and tissues, liquid channels of reproductive labor. Occluded from view by a small round word; no safe passage; it doesn’t last or stick; it sinks. A letter written in thick dark ink. Time measured by the slippage of a tiny physical object, by time congealed, by a bleeding sunset. A desirous incantation is repeated; so is an argument meant to persuade time to bend like a sentence. As feathers are not flowers and a toxic Sacramento sunset repeats and repeats until it doesn’t. 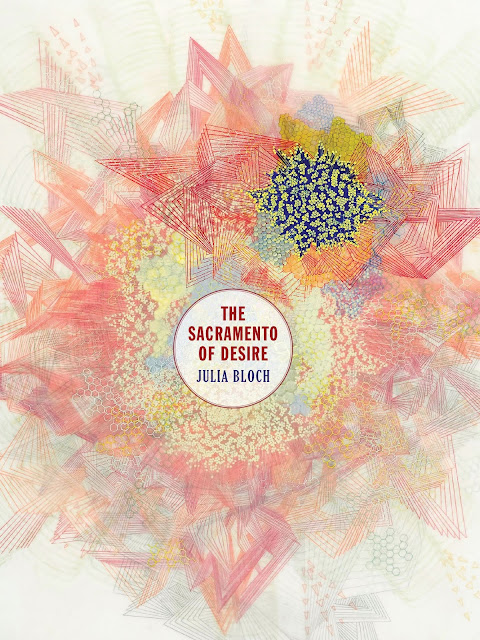 I was very pleased to hear about the latest by Philadelphia poet, editor and critic Julia Bloch, The Sacramento of Desire (Portland/San Francisco: Sidebrow Books, 2020), a follow-up to her Letters to Kelly Clarkson (Sidebrow, 2012) [see my review of such here] and Valley Fever (Sidebrow, 2015) [see my review of such here]. For some time now, I’ve been envious and appreciative of Bloch’s book-length lyric suites, her pace and cycling, moving the prose poem around and through vast distances. As she described The Sacramento of Desire last fall as part of an interview posted at poetry mini interviews: “The book is about fertility, desire, and the queer experience of assisted reproduction; Allison Cobb calls it an ‘horological epic quest poem’ and Sawako Nakayasu calls it ‘an urgent call.’” The Sacramento of Desire is set in four prose-sections—“GLOSSARY: OVULEPT,” “THE SACRAMENTO OF DESIRE,” “INTRAMURAL” and “GOODBYE ASPEN”—The Sacramento of Desire is an exhaustive exploration of the language, details and complications around, again, “fertility, desire, and the queer experience of assisted reproduction,” wrapping a complexity of language and emotions into a single, sustained tone. The poems in this extended prose-lyric write of the bleed and the rupture, the possibility of what might not be possible, and the often sterile descriptions that medical science utilize to describe what exists and occurs naturally within the body. “A ritual breaks into steps.” she writes. “Each step produces a result. Each result wins or loses.”

the page, eyeglass is a form of medicine From late menstrual to early ovulation, it’s easier to say the thing unless it isn’t, one and one and two and seven and seven and the face empties. Timing is participatory. Timing is actual, whereas other actions are diaphanous. To time is to wait, to see is to make virtual, and to make virtual is to align body with signal to count moons counterclockwise. Either you get the book or you get the concept, you get the chart or the seam ripper; both are forms of policing a feeling that’s right (“THE SACRAMENTO OF DESIRE”)