HUM 101. Introduction to the Underworld. [Cross-listed with Divinity and Comp Lit.] In this course, students will be ferried across the river of sorrow, subsist on a diet of clay, weigh their hearts against a feather on the infernal balance, and ascend a viewing pagoda in order to gaze upon their homelands until emptied of all emotion. Texts will include the Egyptian Book of the Dead, the Tibetan Book of the Dead, and Muriel Rukeyser’s Book of the Dead. The goals of the seminar are to introduce students to the posthumous disciplinary regimes of various cultures, and to help them develop the communication skills that are crucial for success in today’s global marketplace.

All reading in English. Requirements include the death of the student, an oral report, and a final paper. (“Fall Term”) 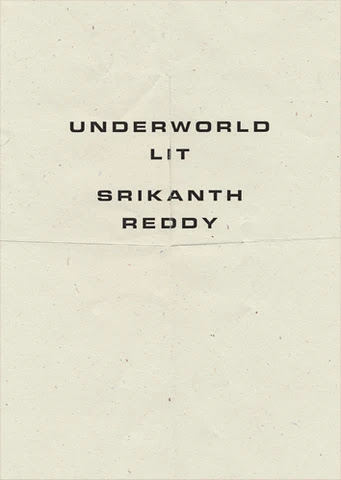 The latest from Chicago poet and critic Srikanth Reddy is Underworld Lit (Wave Books, 2020), a hefty volume composed as a lyric essay-poem in four sections. “My wife worries that I may be digging a hole for myself with this vanity project.” he writes, in the opening section. “All this back and forth about ancient rules of engagement, chain of command, military memorabilia and the like is giving me no end of grief. Hopefully I may be forgiven the occasional liberty in what follows.” Composed in four prose-poem sequences—“FALL TERM,” “WINTER TERM,” “SPRING TERM” and “SUMMER—the press release for Underworld Lit describes the collection as a “multiverse question through various cultures’ realms of the dead. Couched in a literature professor’s daily mishaps with family life and his sudden reckoning with mortality, this adventurous serial prose poem moves from the college classroom to the oncologist’s office to the mythic underworlds of Mayan civilization, the ancient Egyptian place of judge and rebirth, the infernal court of Quin dynasty China, and beyond—testing readers along the way with diabolically demanding quizzes.” There is something quite fascinating with how Reddy weaves together the threads of multiple cultures’ books of the dead, his own health concerns and narratives around health and family. To move through a health crisis, one would surmise, triggered this exploration into how multiple cultures approached death, both approaching full-on his own mortality, and setting it aside as he worked through these explorations. As he writes in the first section:

The odds are good, Song informs us, wiping his spectacles philosophically. Still, he blinks too much as he answers my wife’s questions about this perplexing case. Melanoma is exceedingly rare among individuals of my dusky extraction, and virtually nonexistent within younger sectors of this population. (“You’re a medical miracle,” joked one nurse before I went under, “but not the good kind.”) At least my post-op reports show no spread to the sentinel node, lowering the short-term mortality rate to roughly one in ten. Not bad odds, comparatively speaking. I resolve not to make too much of the matter in the days to come. But the complimentary brochure that I take from the rack upon exiting the reception area says I mustn’t make too little of it either. In this respect, my condition is not like the war. I don’t want to make too much of it in my ambient transactional order, but I don’t want to make too little of it, either.

There seems a huge structural leap from Reddy’s previous poetry collections, constructed as more traditional collections of first-person lyrics, into this book-length exploration into death, collage, lyric prose and the memoir/confessional. Part of what is compelling about this work is how seamlessly Reddy blends the multipe threads of his own life, from writing to teaching to family, in a way that doesn’t overwhelm or alienate. Given the amount of literary writers across North America that teach either at the university or college level, the term “academic poet” is often thrown around as an insult, suggesting that one who writes shouldn’t admit to teaching in their work, or that anyone who writes isn’t supposed to think of writing and thinking as a larger, combined study. I am aware of literary works so deep into a particular pallor of academic language that the writing is lifeless and distant, certainly, from whence the origins of the term began, but for the bulk of writers engaged in writing-as-study, their literary work is one of the best ways in which engaged readers can see the results of that study. Reddy’s Underworld Lit is engaged and lively, immediate and rich with considerations on how one might approach death, which, in turn, also reveals how one should approach life. “Reviewing my notes of the last year,” he writes, as part of “SPRING TERM,” “I see that I have occasionally referred to past events as if they were present. In my defense, it is a habit born out of scholarly convention. One would not write ‘Virgil wrote,’ but rather, ‘Virgil writes of two ways to exit the realm of the dead,’ in a formal study of underworld literature. Just so, every writer, living or dead, is forever suspended in a crepuscular present indicative.”