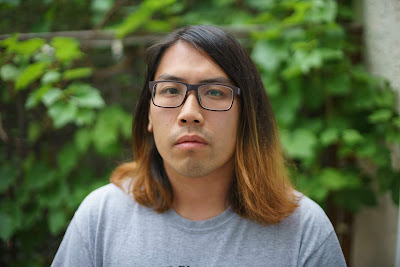 Jean Marc Ah-Sen was born in East York, Ontario, in 1987. He comes from a family of Mauritian winemakers and was a frequent contributor to the Innis Herald, a University of Toronto newspaper. He lives in Toronto with his wife and son. Grand Menteur is his first novel and it was chosen as a Top 100 Book of 2015 by The Globe and Mail. Find Ah-Sen on Facebook or Twitter @jeanmarcahsen.

1 - How did your first book change your life? How does your most recent work compare to your previous? How does it feel different?
It didn’t. No doors magically opened for me. In many ways selling my second book was just as hard (if not harder) than with Grand Menteur, my first novel. In the Beggarly Style of Imitation (Below the Level of Consciousness) is coming out with Nightwood and is a loose sequel to GM, so the two books are intimately linked. I would say my prose style has veered further into abstraction.

2 - How did you come to fiction first, as opposed to, say, poetry or non-fiction?
I think with fiction you can make a spectacle of yourself and no one bats an eyelid; it’s expected that the readership is a little indulgent of whatever extremes come about through the vehicle of fiction writing. Authors are accepted, celebrated even, as purveyors of lies. Grandiosity or a certain hyperbolic inclination in non-fiction is greeted with resistance though; readers are more inclined to be suspicious of a life lived a little too well, becoming in the process doctrinaire about their expectations. Look at the receptions of Kinski’s All I Need is Love, London’s John Barleycorn, and more recently, James Frey’s A Million Little Pieces. Not to put too fine a point on it, but who gives a shit if it was written well? I tried my hand at poetry, but was very strongly rebuffed. I think the gist of it was “You have no business doing this.” Maybe they were right. I love poetry, but I also don’t think I have the temperament to endure the viciousness that younger poets today have to go through from its ”gatekeepers.”

3 - How long does it take to start any particular writing project? Does your writing initially come quickly, or is it a slow process? Do first drafts appear looking close to their final shape, or does your work come out of copious notes?
I'm a malingerer, so I start a lot of projects... and get to them when I can. What I have to do is set external, impractical deadlines, run my mouth a bit, and if an editor seems interested, I go into high gear. My drafts usually survive the culling process. Editors tend to pare down my "floridity," while asking for more chapters—they’re focus pulling.

4 - Where does a work of fiction usually begin for you? Are you an author of short pieces that end up combining into a larger project, or are you working on a "book" from the very beginning?
I’ve worked both ways. I think the phenomenon of short stories becoming full blown novels is an unfortunate symptom of the state of publishing: the old bugbear of economics dictating form. There’s inherited wisdom that collections don’t sell, that there is no appreciable demand for them, and at the same time that not for love nor money will a debut from someone without publishing credentials—usually through shorter pieces in literary publications—ever happen. It’s like the riddle of the Sphinx, but instead of getting into Thebes, writers are granted permission to crawl up their own behinds and die on a vaguely uncomfortable hill.

5 - Are public readings part of or counter to your creative process? Are you the sort of writer who enjoys doing readings?
I’m grateful to be asked and I seek them out sometimes—the money and exposure can be good. It’s nice that readings are part of the lifespan of a book, can give it sea legs in a manner of speaking, but I am surprised there is an appetite for them. To me they seem like an out of body experience… for everyone involved.

6 - Do you have any theoretical concerns behind your writing? What kinds of questions are you trying to answer with your work? What do you even think the current questions are?
My stuff is like Charles Dickens impersonating Rudy Wurlitzer impersonating Dickens; I’m marrying influences from the 18th and 19th centuries with Modernist and Post-Modernist ones.

One pressing question as I see it is whether the novel has to offer social commentary to be relatable. Prevailing opinion answers in the affirmative, and I agree to a point. People look to the arts as an extension of their friend circle—opacity in intention doesn’t get to come to dinner. A lot of readers can’t conceive of the novel as anything but a social realist document born of the world it is about; and believe me, I get it—who wants to read sympathetic depictions of bankers? But the result has been a kind of inescapable politicization of a lot of fiction, which has cheapened both works that do and do not engage along this dimension—like a suburban melodrama making perfunctory judgements about homelessness. Not every book has to be The Road to Wigan Pier. The idea that a work only has value if it is morally instructive is outdated—I doubt publishers are looking for the next Samuel Richardson. It smacks of dilettantism to me. This is how you get bourgeois writers sympathetically talking about the working class by throwing their politics around like they’re returning a glass of wine. I would much rather see a text be unabashedly apolitical without peppering platitudes about in a bid to be relevant.

There is a representation problem that the arts is contending with, but I think it goes beyond getting our books on shelves. It’s also tied up with conceptions of what writers of colour are “allowed” to be publishing in order to meet the demand of what is understood to be our audience. The “authenticity” question often rears its head. Not having the bona fides used to bar entry; now, if a film about ice skating is a hit and you’ve written a novel about the same subject, you might be about to win the lottery. I don’t have a problem with that as long as opportunities continue to grow for everyone. More generally, writers contend with the question of whether their work is superfluous; “surplus fiction” is fine as long as it acknowledges its history. There’s nothing more tawdry than a writer who is not well read.

7 – What do you see the current role of the writer being in larger culture? Does s/he even have one? What do you think the role of the writer should be?
The best writers still partake in a tradition of being ahead of culture, steering it towards some undetermined social terminus—usually some conception of liberation. The worst writers are conformists, trying to keep skin in the game by aping trends and conventions and patting themselves on the backs while they’re at it. It’s not surprising, considering we’re all social climbers and there’s less money in publishing than ever before. That being said, I still firmly believe that writers should be anything they want to be—shills, peacocks, pseudo-philosophers, lamebrains, egomaniacs; the modus operandi should still be a liberatory framework, and within that I believe it’s still possible to have ethics and be accountable without necessarily asking for permission to have an opinion. I like authors that stay hungry throughout their careers, are glamorous, uncompromising, unbearable, emotionally ravenous, intellectually liberated—basically anyone who would exhaust my patience in my personal life.

8 - Do you find the process of working with an outside editor difficult or essential (or both)?
Essential, no question. A good editor is your greatest advocate to whoever is holding the bag of money. The best ones are snake-charmers and risks-takers, because not only do they get you to do a song and dance for your audience, but they convince you to rip your own work to shreds in the pursuit of glory and perfection. I married a former editor—love at first revision.

9 - What is the best piece of advice you've heard (not necessarily given to you directly)?
"There are no new ideas, only unusual ways of forgetting." I am reasonably certain I might have said that.

10 - What kind of writing routine do you tend to keep, or do you even have one? How does a typical day (for you) begin?
It boils down to working when my children allow me to; when they are asleep or at school. It’s a very delicate balancing act. I feel like I am one novel away from being so engrossed in writing that I’ll raise a score-settling Salinger child in the process.

11 - When your writing gets stalled, where do you turn or return for (for lack of a better word) inspiration?
I think the distinction between participating in culture and consuming it is helpful. When I get stalled, I turn to books or films, and try to switch off the generative part of my brain. My writing is almost always a direct response to existing texts, so I specifically turn to them. The novel I’m working on is equal parts W.H. Davies trampology and rock and roll memoir, so I’m filling the tank with books like that.

12 - What fragrance reminds you of home?
At the moment dirty diapers. Maybe a mercaptan leak.

14 - What other writers or writings are important for your work, or simply your life outside of your work?
My main influences are Edith Sitwell, Blaise Cendrars, Tobias Smollett, Voltaire, Anthony Burgess, André Maurois, Jorge Luis Borges, Flann O’Brien, Italo Calvino, Thomas Pynchon, Gillian Freeman, G.V. Desani, Robert Walser, and Michel Leiris. I derive a lot of emotional sustenance and resources from my friends in the business as well: Naben Ruthnum, Paul Pope, Adnan Khan, André Forget, Paul Barrett, Barry Hertz; people that have hoed the road bigger and better than I have and made a career out of writing, helping me along the way.

15 - What would you like to do that you haven't yet done?
Write exclusively for a living.

16 - If you could pick any other occupation to attempt, what would it be? Or, alternately, what do you think you would have ended up doing had you not been a writer?
I’d be a writer making questionable music or a musician making questionable novels.

17 - What made you write, as opposed to doing something else?
My inability to play nicely with others.

19 - What are you currently working on?
I wrote an omnibus novel/anthology with Lee Henderson, Devon Code, and Emily Anglin called Parametrics of Purity. It’s like a Can-Lit band, or Ro.Go.Pa.G., the omnibus film Rossellini, Godard, Pasolini, and Gregoretti made in the sixties at the height of their powers. I’ve just started a new novel called Kilworthy Tanner, a kind of pseudobiography.
12 or 20 (second series) questions;