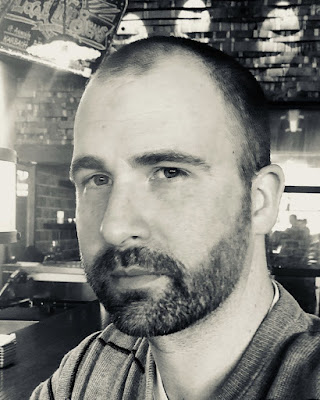 Todd Dillard's work has appeared or is forthcoming in numerous publications, including The Adroit Journal, Fairy Tale Review, Superstition Review, Split Lip Magazine, Booth, and The Boiler Journal. His debut book of poetry Ways We Vanish (2020) is available from Okay Donkey Press. He lives in Philadelphia with his wife and daughter and works as a writer in a hospital.

This book has been a goal of mine for over twenty years… and I took a bit of a detour to get here, so I wasn’t sure I’d ever even have a book. It’s a tremendous relief. It’s also… how do I say this? It’s cleared the way for the other work I need to do. Publishing a book has taught me that the work is never done. I anticipated this somewhat, but I didn’t think it would be one of the main feelings I have about the book—joy, relief, even triumph, yes… but also: I have more to write! I don’t have time to stop!

A 7th grade teacher assigned a poetry prompt to my class to attach sensory elements to a feeling—“mellow is the yellow of cigarette smoke” I think I wrote. My 8th grade English teacher made us submit work to a writing contest, and I, as a lazy student, submitted the poems I’d written the year before and did really well. In this way, I stumbled into realizing I don’t quite think the way other people think, and that mode of thinking lends itself to writing poetry.

My book Ways We Vanish spans about 15 years of writing. I’d say I write quickly and can start projects quickly, but most of the time I stop because I lose interest or steam or something else comes along. My poems sometimes come out similar to how they will end, or sometimes they go through radical changes. It’s different for each poem; this I know is a broad answer.

I just kind of write whatever I want and then, when I see themes develop among my work, I note that. I don’t try to create toward those themes, but I try to be sensitive to them if they appear in what I write. In this way I build a collection that I then shape into a book—at least, that’s what I did for my book.

I love doing readings! They have nothing to do with my process.

My book isn’t interested in interrogating literary theory—which is the kind of theory I think is implied in your question. I think the book’s big question is: How Does One Build a Life? But the construction of building a book around questions suggests there’s investment in answering them too, which there isn’t. My book explores grief and moving on and fatherhood. That’s a vast country. I’m not looking to stake a flag into it, I’m looking to reach its edge and peer over it.

Writers don’t have roles! This suggests something nebulous to me, or, worse, something prescriptive, or, even worse, something moralistic about what writers *do* or *should* do. I don’t know what writers should do. We’re weird and feel things and see things in weird ways and sometimes we write them down, perhaps less often than we want to. The things writers should do are the things everyone should do: floss, sleep more, learn to swim, practice kindness, pet a dog, etc.

I didn’t have any difficulty working with my editors at Okay Donkey—it’s one of the pleasures of the book experience, having editors who both get your work and are excited to get your work into the hands of others who get your work. I’m pretty laid back about the whole thing, which means if someone else has a comment about a piece, I’ll consider it, even implement it to see what they’re seeing, and if it works great! And if not I’ll say no thanks. I think there’s a sense that perfectionists are combative, but I’m a perfectionist who finds great humor and joy in breaking and rebuilding work, and having someone alongside me to do it with is thrilling. It helps to have someone who’ll watch you blow up and poem and laugh and say “Let’s try it again a different way!” and also laugh when that explodes too.

Just say it. Obscurity is not originality. Poems live by exploring truths and die by clever turns of phrases.

I studied prose poetry, so when I write flash it’s often just me writing a prose poem that needs something more—a series of escalations, or something that resembles plot to make it work. That’s my flash fiction, basically prose poems in trench coats and fedoras. This is pretty easy for me to do and quite satisfying, as flash fiction frees me up to go wild in a way I don’t feel I can in a poem. So, that’s the appeal of (flash) fiction to me. Poetry is appealing because sometimes you can sneak in a rhyming couplet at the end.

For this book, I’d read new poems and do some editing before bed, read/edit on the bus/subway to work, write during lunch, read/edit between meetings at work, read/write/edit during the evenings between hanging out with my kid or my wife, read while going to the gym… every spare moment I was asking myself if I needed to dedicate time to my writing. It’s slacked off a bit since the book came out, and I’ve been mostly editing the poems that I like that didn’t make it into the book.

For some reason I read this question as if my writing was a horse being put in a stall—which I think would be good for my writing. I’d love to know I could also saddle it up sometime and go somewhere. Unfortunately my writing is a pterodactyl. It doesn’t get stalled so much as stops to nest for a bit before flying off. When it’s unreachable I just read stuff I like, or, if I’m just exhausted, I’ll go back and revisit some cherished books. They always recharge me.

Pine and sunscreen and sautéed garlic and bread and chocolate chip cookies in the oven.

My poems are very interested in prosody, I think in part because I enjoy childhood fables and the cadences therein, and in part because I played clarinet from middle school through college. The music is there in my work, though I’m less interested in overt lyrical performance than I am in taking quotidian rhythms of speech and using register, alliteration, and assonance to elevate or suppress certain narrative moments. Also I tend to write in imagistic sequences similar to comic books—my family co-owned a comic book store when I was growing up and they were a very important part of my life until I moved away from TX and to NY.

I’ve benefitted from a glut of some of America’s best writers: Jericho Brown, Marie Howe, Vijay Seshadri, Claudia Rankine, Matthea Harvey, Dennis Nurkse, Suzanne Gardinier, and Tom Lux have all been my instructors. I’m over 10 years removed from their instruction, but their lessons remain with me. I’m also lucky to have some amazing beta readers: Ben Kline, Niina Pollari, Lee Potts, Cyndie Randall, Madeleine Corley, Teo Mungaray, and Peter H. Michaels are all people I can reach out to for comments and advice, and I’ve flourished under their intelligence and creativity and guidance.

I would love to write a series of Avatar: the Last Airbender fanfiction about the fall of the Turtle Cities and an earthbender who must combat waterbender using their waterbending arts to spread a plague throughout the world. Sometimes I’m happy knowing, though, that this story remains in my head. In general I’d love to write a novel, but I’ve tried and am awful at them.

In college, when I was split between being a music major or pursuing creative writing, I had to decide what I wanted out of my life… and I could kind of see the trajectory I would have had if I had been a band director. I was a happy, normal-ish life I think, but I wanted more. Writing led me to a crazy life in New York, and now I work as a writer for a major teaching hospital in Philadelphia. I love the experiences I’ve had, the life I’ve lived, even if some years I was more surviving than living. I think with other pursuits, I kind of had an idea of who I would have been had I chose that path, but I didn’t know who I’d be if I chose writing. And now, many years later, I can’t imagine being any happier.

Delights and Shadows by Ted Kooser for poetry and Lincoln in the Bardo by George Saunders for prose. I don’t watch movies! Except with my kid. I quite liked Frozen 2.

You know, I have this big project idea, which I submitted as my NEA application… but really, I’m just working on decompressing. Getting a book out in the world, then trying to stump for it, then waiting to see how people react to it, then figuring out what a reading/book tour would look like during a pandemic… it’s a lot. In the way I needed time to write toward the book and sort myself out throughout my twenties, I feel like I need some time to write myself away from the book too. So I’m working on that, working on finding my way back to writing the kind of poems that wouldn’t go in this book. It’s done, it doesn’t need a B Sides. I need newness, and so I’m working on discovering that newness. For now.