The Unbearable Lightness of Being (1984) might be Milan Kundera’s best-known novel, but I was always partial to Immortality (1990). This is a book, of course, I can’t locate in my library. I know I still have it around, although it might still live in our storage unit, two-plus kilometres east; a storage remnant of our two years’ past basement flood and extensive downstairs reconstruction. I remember first reading Immortality when I was twenty-four years old, and I told myself for some time that the novel ‘changed my life,’ although I can’t remember exactly how. That was nearly thirty years ago, after all. Since those days, I’ve admired Kundera’s ability to equally blend elements of the political, philosophical and the intimate, a goalpost I’ve worked to reach in my own fiction. It’s hard to do well, and easier to see when it misses the mark, and Kundera managed to articulate novels from within a period of turbulence, writing of political and social upheaval. I read a debut novel some twenty years ago that went back and forth between a political thread and a romantic thread, but only one of those threads was compelling, which meant the other lay fallow. At the end of my paperback copy of Kundera’s The Book of Laughter and Forgetting, he closes an interview conducted by Philip Roth with this:

I am wary of the words pessimism and optimism. A novel does not assert anything; a novel searches and poses questions. I don’t know whether my nation will perish and I don’t know which of my characters is right. I invent stories, confront one with another, and by this means I ask questions. The stupidity of people comes from having an answer for everything. The wisdom of the novel comes from having a question for everything. When Don Quixote went out into the world, that world turned into a mystery before his eyes. That is the legacy of the first European novel to the entire subsequent history of the novel. The novelist teaches the reader to comprehend the world as a question. There is wisdom and tolerance in that attitude. In a world built on sacrosanct certainties the novel is dead. The totalitarian world, whether founded on Marx, Islam, or anything else, is a world of answers rather than questions. There, the novel has no place. In any case, it seems to me that all over the world people nowadays ask, so that the voice of the novel can hardly be heard over the noisy foolishness of human certainties. 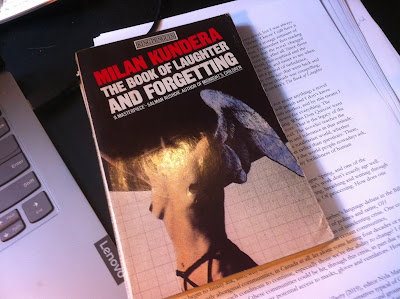 While he remains one of the great writers of the Czech Republic’s Prague Spring, and one of the greatest novelists of the twentieth century, certain elements of Kundera’s work don’t exactly age well. His depictions of women, for example. And yet, his an example of living, breathing and writing through the midst of great crisis. Writing as a way of thinking, of documenting. Of processing. How does one write in a crisis?

And crisis is relative, of course. There were those on both sides of Quebec’s language debate in the Bill-101 years that Mordecai Richler wrote about in his non-fiction blend of politics and satire, OH CANADA! OH QUEBEC! (1992), that saw themselves as the victims of unrelenting crisis. One could also begin to finally ask, also, why there have been water advisories in certain communities, predominantly aboriginal communities, in Canada at all, let alone some lasting four decades or more? How do we allow such conditions to continue, especially those we’ve the ability to change? I dread to think of how hard some of these communities could be hit, through this crisis, in part due to their lack of basic necessities, even before any potential access to masks, gloves and ventilators. How does one write in a crisis?

In the introduction to Resisting Canada: An Anthology of Poetry (2019), editor Nyla Matuk writes: “The poems in this book question the triumphalist, nation-building narratives typical of Canada’s historiography. As a settler-colony, Canada will only find the road to moral ground once it attempts to understand how and why it sits atop land, cultures, significant landmarks, and memories that do not belong to it, and faces its history of irreversible damage to First Nations Peoples, including its genocidal intent; once the state stops taking for granted that its self-declared presence permits access to unceded lands or entitles it to ignore or transgress the territorial or jurisdictional sovereignty of First Nations.” She continues:

I think of Billy-Ray Belcourt’s NDN Coping Mechanisms (2019), where he writes: “Let us undertake an ethnomusicology of tears. I am after the frequency of NDN grievability. My hunch is that the pitch interrogates itself, like a hymn.” I think of Layli Long Soldier’s Whereas (2017), writing: “But the term American Indian parts our conversation like a hollow bloated / boat that is not ours that neither my friend nor I want to board, knowing it will never take us / anywhere but to rot. If the language of race is ever truly attached to emptiness whatever it is / I feel now has me in the hull, head knees feet curled, I dare say, to fetal position—but better / stated as a form I resort to inside the jaws of a reference; [.]”

I might ask how one writes in a crisis, but to many, the very question broadcasts my lack of awareness of the larger world in which we live. To some, crisis has been here for hundreds of years. None of this is new.