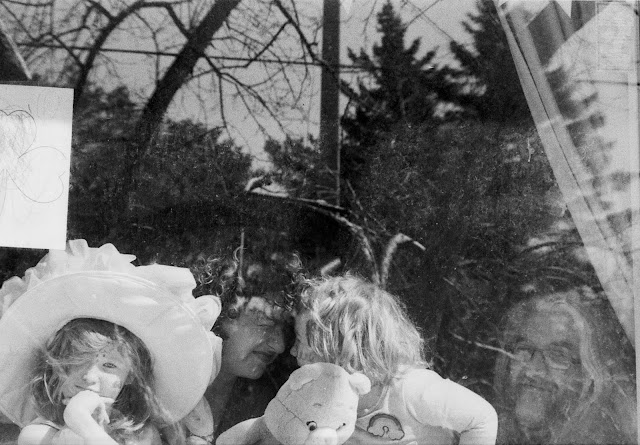 In response to the self-isolations, my friend, Ottawa poet Stephen Brockwell has instigated a series of 35mm portraits of poets through windows. He stands outside, as his subjects remain safe in their houses. He wishes, as he writes me over email, “to document in physical, material ways the Coronavirus.” He asks: do we get evening or morning light?

Our front window faces west, and the backyard, east. Late March: our yard is still a variety of snow, ice and water, so I suggest the front window, pushing his opportunities into the afternoon.

Today is warm, and the sun is out. Soon, he stands in our driveway, headset attached to his cellphone, speaking to us in real time. Christine puts him on speakerphone, so we can all hear. A half-second delay between watching and hearing him speak. From within our living room, the girls mug at the front window; Stephen requests we lean in for the sake of proper light, and framing.

He catches us all, but within days is forced to abandon the project, given stricter directives around social distancing, and remaining home. We all remain home.

Stephen has been engaged with photography the entire time twenty-plus years that I’ve known him; he prefers the results of film over digital, for the sake of texture, of depth. Through preparation for this project, he told me that he came upon a whole array of photographs he took of us in 2002, during a reading tour we did of Ireland. A photograph of myself, brooding, in front of Yeats’ Tower, Thoor Ballylee, the 15th century Hiberno-Norman tower house in County Galway, once owned and inhabited by the poet William Butler Yeats. “What shall I do with this absurdity, / O heart, O troubled heart —” Yeats wrote, opening the title poem to The Tower (1923), writing on age and experience and hard-won truths. More recently, Ottawa-born American poet Paul Legault reworked his own translelation of Yeats to compose his own volume, The Tower (2020), overwriting Yeats’ lines to seek his own discoveries. A transelation, as Erín Moure coined it, from her own exploration of creating new work through translating, Pessoa-esqe, within the language. As Legault wrote the first lines of his own title poem: “How will I do being old when I’m old – / having to use this same heart in its place.”

What I recall of that day, driving though Galway, was the amount of time he would take to set up his tripod each time, staring down into the top of his camera to set up each shot. As we travelled across Ireland, multiple stops at ruins, churches and fields where as he set up his camera. He had a whole sequence of photographs from that trip. I did also, deciding to take snapshots with my digital camera of Stephen from behind, as he set up his camera and tripod, although with only Stephen in view. My joke was that it looked from his stance that he wasn’t taking photos, but peeing. My photo-sequence of Stephen Brockwell, seemingly peeing at important sites all over the country.

What I recall of that day: the tears in his eyes as we pulled up to the Tower.