Last summer. At the border between two countries.

It was hot. The police wore white hats. In white leather belts they carried guns. The guns were attached to their belts with white cords, curled up like the cords of old telephones. I thought of whom I would like to kill if given the chance. Of people on my phone list: One. Maybe two.

Berlin-based visual artist and writer Inger Wold Lund’s first English-language publication is the small chapbook Leaving Leaving Behind Behind (Brooklyn NY: Ugly Duckling Press, 2015), an absolutely incredible title I’m delighted to have discovered in a pile of books resting on one side of my little office. Listed in the Ugly Duckling Presse catalogue under both poetry and fiction, the delightfully subtle and deceptively straightforward prose-pieces in Leaving Leaving Behind Behind examine the remarkable within the mundane, and are easily comparable to some of the best that the border on either side of “postcard fiction” and the prose poem have to offer, whether the works of Lydia Davis, Sarah Manguso’s Hard to Admit and Harder to Escape (McSweeney’s, 2007) or Czeslaw Milosz’ Roadside Dog (1998). Certainly, the issue of genre in her work is fluid, and one that might seem as irrelevant as it is essential. In an interview posted at the Ugly Duckling Presse tumbler (a frustratingly short interview, I might add), she responds to the question “What is poetry?” with “I am not very concerned with genres, but I was told that as a rule of thumb one can recognize poetry by the ragged right margin.”

Yesterday. In an email.

He wrote me that a group of kids had biked past him when he was sitting outside the house where he lived when he himself was a kid. As they passed, one of them turned around and screamed. 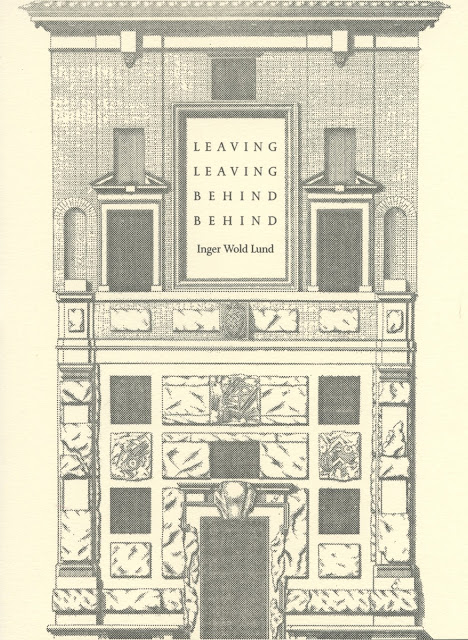 In a short review posted at Rain Taxi, Tova Gannana opens with: “Inger Wold Lund, a Norwegian living in Berlin, wrote Leaving Leaving Behind Behind in English. A book of poems in the form of a day-book or a day-book written to read as poetry, it offers a duality, a doubleness of language.” The day book aspect of the volume is intriguing, as Lund composes extremely dense sketches of domestic life, and domestic patter, yet reveling in a kind of magical quality throughout. Her titles, each a double of sorts, sets the immediate scene of the poem—from “Last summer. In an email.” to “Many years ago. At my mother’s place.” and “Some years ago. In a kitchen.” Occasionally, either a physical or temporal location might be repeated, which help tie the collection of seemingly stand-alone pieces together into a single, and quite incredible, work. One notes as well that all the temporal locations are in the past, and never present, which make the present, in its own way, curiously absent, but for the sake of these short missives (which, themselves, appear to be entirely in the present). Is it the distance that allows the narrator such clarity? Is the present sense of the past the only version that ever exists?

Frustratingly, the book is already listed as out of stock. Will they make more? Is another larger volume, perhaps, in the works?

Half a year ago. At a store.

The lady in the store told me the marks on the pumpkin I had chosen had appeared during a hailstorm earlier in the fall. Then she asked if I remembered the storm. I said no.

There is more Ms. Lund here.