F. Scott Fitzgerald wrote lists. Abraham Lincoln took midnight walks. Tallulah Bankhead paid a series of young caddies to hold her hand in the dark, as did Marcel Proust. Thomas Edison invented the light bulb so he could read after dark. I put a piece of paper under my pillow at night, and when I could not sleep, I wrote in the dark, wrote Henry David Thoreau, who once spent a fortnight in a roofless cabin with his head on a pillow of bricks.

There are two kinds of insomniacs: those who fall asleep easily, only to wake up hours later to toss on their pillows until dawn; and those who toss on their pillows from the start, only to drift off just long enough to be roused at dawn by the crows. A little game I like to play, when I crawl into bed at the end of a long day of anything, these days, is to guess which kind, tonight, I will be. 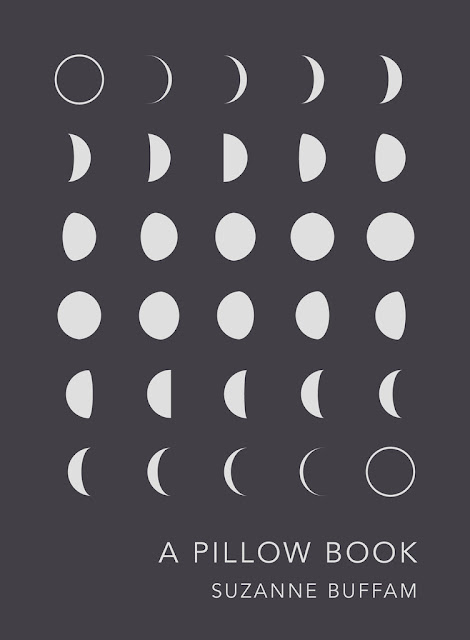 Canadian poet and Chicago resident Suzanne Buffam’s third trade poetry collection, A Pillow Book (Toronto ON: Anansi, 2016), is a book of lists and a study of sleep, or, a lack thereof, akin to Anne Carson’s “Every Exit Is an Entrance (A Praise of Sleep)” that appeared in an issue of Prairie Fire (Vol. 25, No. 3, Autumn 2004), before being included in Carson’s Decreation (New York NY: Knopf, 2005), or even angela rawlings’ collage-study Wide Slumber for Lepidopterists (Toronto ON: Coach House Books, 2006). As Carson wrote: “I want to make a praise of sleep. Not as a practitioner–I admit I have never been what is called ‘a good sleeper’ and perhaps we can return later to that curious concept–but as a reader.” Buffam’s, also, is very much a praise similar to Carson’s—as reader, admirer and not necessarily practitioner—and written as much as a series of observations amid a history of sleep and, specifically, pillows, which suggest structural echoes to Ottawa poet Brecken Hancock’s prose poem-history of bathtubs and bathing, The Art of Plumbing (above/ground press, 2013), a work later included in her remarkable Broom Broom (Ottawa ON: Coach House Books, 2014) [see my review of such here]. As Buffam writes: “I am awake, begins a seventeeth-century British meditation intended for the dead of night, but ‘tis not time to rise, neither have I yet slept enough. I am awake, yet not in paine, anguish or feare, as thousands are.”

Following her two earlier poetry collections—Past Imperfect (Toronto ON: Anansi, 2005) and The Irrationalist (Anansi, 2010)—both of which were structured more traditionally as collections of shorter lyrics, A Pillow Book is striking for its structure as a single, extended series of observations and explorations, most of which exist as titleless and seemingly standalone prose pieces of varying lengths. One section, for example, includes but a single sentence: “Men and women sleep on the same pillow, says a Mongolian proverb, but they have different dreams.” Some elements of her two prior collections hinted at such kinds of longer, extended prose structures, but hadn’t the ambition of A Pillow Book. The collection (and title) plays off and explores Sei Shōnagon’s The Pillow Book, an infamous work of prose and poetry fragments (made further known due to Peter Greenaway’s 1996 film) often referred to as the first Japanese novel, composed as a “book of observations and musings recorded by Sei Shōnagon during her time as court lady to Empress Consort Teishi during the 990s and early 1000s in Heian Japan. The book was completed in the year 1002.” (Wikipedia). Buffam’s collection riffs off both content and form of Sei Shōnagon’s work through an accumulation of short sections, most of which exist as prose (or prose poems), some of which are written as short sketches and/or lists. As she writes: “Sei was her father’s name, Shōnagon her father’s rank. For a brief span of time at the turn of the tenth century, we know that she spent her nights behind a thin paper screen, recording her fugitive aperçus by candlelight with an ink stick on rice paper behind the bolted Heian gates. We know that she slept, when she managed to do so, on a small, hollow pillow mad of polished bamboo.”

Many lovers came to see Shōnagon, but few seemed to please her. Those who did, tact prevented her from praising. Anyone turning to her Pillow Book in search of courtly dirty-talk or cozy boudoir scenes by candlelight will turn away unsatisfied. The raciest scene in my abridged bedside edition consists of a woman taking a nap alone under bedclothes that smell faintly of sweat. It is, by and large, a dry read. So many Senior Courtiers of the Sixth Rank, Chamberlains of the Right and of the Left, Middle Counselors, Minor Chancellors, and Chancellors’ Messagers attend so many Festivals of the Fourth Day of the Fourth Month, of the Eighth Day of the Eighth Month, of the Blue Horses, of the Kamo, and of the Cherry Trees, wearing so many unlined robes of green, yellow, plum, scarlet, crimson, violet, rose, and cherry silk, in palm-leaf and wickerwork carriages, bearing herbal balls, hare-sticks, zithers, and thirteen-pipe flutes, it is hard to endure more than a page or two at a stretch. Therein lies much of  its appeal for me. It affords sufficient distraction on one’s pillow at night to transport one to a late Kurosawa dream sequence, but also enough repetitive and inconsequential minutiae to conjure, on a good night, the infinitely gentle god of sleep.

Sprinkled with personal moments of partner and daughter amid proverbs, historical tidbits on the pillow and sleep, as well as a book that works its way through Shōnagon’s thousand year old work, Buffam composes the fragments that make up A Pillow Book through and against an inability to sleep, sketching out short observations, lists and other fragments against what she aims toward but somehow misses—sleep itself:

Not a memoir. Not an epic. Not a scholarly essay. Not a shopping list. Not a diary. Not an etiquette manual. Not a gossip column. Not a prayer. Not a secret letter sent through the silent palace hallways before dawn. Lacking as it does a table of contents, an index, plot, or any discernible chronology or structure, with almost a thousand pages of surviving material, translated, retranslated, and republished in ever-shifting editions, what are the chances, I sometimes wonder, that any two people ever read the same Pillow Book?

And, as Buffam suggests, hers is an entirely different creature than, say, Canadian-turned-American poet Alan Davies’ Sei Shōnagon (Ottawa ON: hole books, 1995), a chapbook composed as a sequence of one hundred and eighty-three tercets which barely reference the title (and alluded source material), writing:

[Suzanne Buffam launches A Pillow Book in Ottawa on April 18, 2016 as part of the Ottawa International Writers Festival]