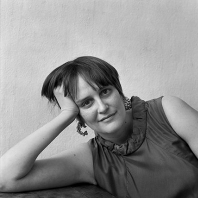 Andrea Baker is the author of Each Thing Unblurred is Broken (Omnidawn, 2015), Famous Rapes, a paper and packing tape constructed not-quite-graphic-novel about the depiction of sexual assault from Mesopotamia to the present day (forthcoming, Water Street Press), and Like Wind Loves a Window (Slope Editions, 2005).  Her recent work has appeared in Denver Quarterly, Fence, Pleiades, The Rumpus, Tin House, and Typo. It has also been anthologized in Family Resemblance: An Anthology of Eight Hybrid Literary Genres (Rose Metal Press, 2015), Verse Daily, and Broken Land: Poems of Brooklyn (New York University Press, 2007). In addition to her work on the page, she is a subject in the documentary, A Rubberband is an Unlikely Instrument. She works as an appraiser of arts and antiques in New York City.

1 - How did your first book or chapbook change your life? How does your most recent work compare to your previous? How does it feel different?
My first book, Like Wind Loves a Window gave me community.  I got to know Jennifer Bartlett and Matt Hendrickson and the circles of people around them.  And I found my way onto the mom-poet listserv, which was a lifesaver for me.

I had been living a very marginal, Bohemian life, which was comforting and it’s own sort of shelter from world, but I was extremely isolated, crushingly poor, and in a restrictive relationship.

I didn’t do it all at once, and I didn’t always do it gracefully, but having the book provided with me with a trail of breadcrumbs to follow out into the world beyond the walls of my apartment and my role as a wife.

My second book, Each Thing Unblurred Is Broken is the inner life of following that trail.

2 - How did you come to poetry first, as opposed to, say, fiction or non-fiction?
True story.  I was at a reading for the first journal to accepted my work (which I considered minimalist fiction) when I learned that they only publish poetry, and that they thought I was writing poetry.  Then the poetry editor from a larger journal called 3rd Bed happened to see my work in the first journal and she asked me for work to consider for 3rd Bed.  The next issue they asked me on as associate poetry editor.  Soon after I began to employ line breaks.

3 - How long does it take to start any particular writing project? Does your writing initially come quickly, or is it a slow process? Do first drafts appear looking close to their final shape, or does your work come out of copious notes?
Poetry is meditation.  I record my wandering mind and build things from the fragments.  But I don’t think I’ve written a single poem in the last year.

For the last couple years I’ve been working on a hybrid not-quite-graphic-novel/art/non-fiction book called Famous Rapes, which keeps getting pushed back, but is now due out Spring 2016.  It’s about the depiction of sexual assault from Mesopotamia to the current day.  Most of the writing there looked like researching.  Actually, in poetry most of the writing looks like researching too, but it’s research into own my being.

5 - Are public readings part of or counter to your creative process? Are you the sort of writer who enjoys doing readings?
I don’t enjoy attempting to hustle up an audience—that is counter to my creative process.  And I don’t love tiny readings, or travel.  But giving readings with at least twenty or thirty people, and where it isn’t on me to get people there bring me closer to my own work.

6 - Do you have any theoretical concerns behind your writing? What kinds of questions are you trying to answer with your work? What do you even think the current questions are?
I have some spiritual questions that approach theory—matters of immanence and the nature of the material world, and the nature of absence as its own sort of presence—but coming to terms with the fickleness of perception and making it through the day—how to be—are what interest me most.  I’m more about navigating than I am about questions or answers.

7 – What do you see the current role of the writer being in larger culture? Does s/he even have one? What do you think the role of the writer should be?
I don’t think in these terms.  I know that we all help one another through speaking and through reflecting and through recording the authenticity of acts of play, and writing is an act of play, but I’m not interested in roles.

8 - Do you find the process of working with an outside editor difficult or essential (or both)?
Essential.  I love to be edited.  I’m much more of a reviser than I am a writer, and I appreciate thoughtful editors to no end.  They bring me further than I can get on my own.

9 - What is the best piece of advice you've heard (not necessarily given to you directly)?
Once I was sitting in on a figure drawing class.  The professor came in and drew a big sine wave on the blackboard.  He told the students that it was at the lower peaks of the wave that the work was being done—the times of difficulty, when things aren’t going right.  Then he put his chalk on the top of the wave and said that the upper peak is great, but it’s just the reward.  It isn’t the work.

His voice was cracking with angst.  Personally, I know that a more even-keeled and thoroughly creative life is possible, but twenty years have passed and I’m still reflecting and extracting meaning, even if some of my own meaning entails a rejection of his premise... so I’ll say that was the best advice.

10 - How easy has it been for you to move between genres (poetry to visual works)? What do you see as the appeal?
In my late teens I was more or less obsessed with figuring out what unities all the arts—there was a spirit I could feel below all of them, and I had no idea what it was.  In college I designed a major for myself called Comparative Arts.  My goal was to understand each of the arts as articulate bodies of work and to understand what held them together.

My interests have always been really broad.  I was a girl obsessed with dance class, and then I was teenager at an art school majoring in cello.  Then I found the world of writing, and was glad to have found a way to explore and play around that was outside the competitive world of music performance, where I knew I didn’t stand a shot at getting a job in a major city.

All the arts are really the same thing to me.  They’re all just messing around—play—and expressions of/records of humanity, or spirituality, or the human spirit, or however you want to say it.

I don’t have a lot of intent involved in moving between genres.  I just play around however I want to play around.

11 - What kind of writing routine do you tend to keep, or do you even have one? How does a typical day (for you) begin?
The dog gets fed, a cup of coffee is had, and, often, I go to work.  I’m an appraiser of fine and decorative art and do a lot of consulting in the mid-market auction world.  Writing isn’t an element of structure in my life.

12 - When your writing gets stalled, where do you turn or return for (for lack of a better word) inspiration?
Rilke, Roethke, and Wallace Stevens.

14 - David W. McFadden once said that books come from books, but are there any other forms that influence your work, whether nature, music, science or visual art?
Eastern philosophy and contemporary choreography are fairly direct influences, but it isn’t an exaggeration to say the entire material world influences me.  As an appraiser I am very engaged with “stuff,” and with the way stuff moves through the world.  I spend a much higher than average amount of time in dead people’s homes.

Lately, I’ve been interested in hip-hop and rap, and in the significance of banality.  ......though, at the end of the day, I might agree with McFadden.  Reading is what makes me write.

15 - What other writers or writings are important for your work, or simply your life outside of your work?
I’m not sure I have an inside and an outside, in relation to my work, but I love the compressed and precise language of auction catalogs.

16 - What would you like to do that you haven't yet done?
I don’t like talking about things before I do them.

17 - If you could pick any other occupation to attempt, what would it be? Or, alternately, what do you think you would have ended up doing had you not been a writer?
I don’t conceive of writing, especially writing poetry, as an occupation.  Many writers are academics, and being an academic is occupation.  If I had been born into any particular religion I might have made engagement with that religion my occupation.  And in some alternate plane of the life I was born into, I might be very fulfilled living as a Buddhist nun.

.......but I am very happy with the life I have.  I worked my ass off to get it.  And I did the work because I was engaged and wanted to do it; I never would have believed that the things I have accomplished were possible for me.

18 - What made you write, as opposed to doing something else?
“Something else” here means, to me, working in another art form.  I’m not very interested in anything other the arts, though I am voraciously interested in the arts, and interested ideas (philosophy and psychology) as expressed in material forms and play-things.

19 - What was the last great book you read? What was the last great film?
Maggie Nelson’s Argonauts was great.  I don’t love movies—when I watch something I prefer to enter a familiar world, and live in that world for an extended period of time.  But the Netflix series Longmire is great.  It’s very Terrence Malick-y.  After a few episodes I started wondering how it could be so good, so I googled and there’s a poet involved—Tony Tost.

20 - What are you currently working on?
This makes me happy.  I get to make a companion adult coloring book for Famous Rapes.  A handful of test images are at the printer’s now.  After I assess line quality, I’ll dig in further.