The poems in 100 Days pose incisive questions that deepen our resolve to witness. Striking through official discourse, the poetry is multiscalar and delicately local in its attentiveness. The one hundred days recounted here, “should be days to think / to consider / to see / to witness.” With these poems we learn about the impossibility of persisting, and yet persisting, through everyday horror. In her writing, Okot Bitek shows how ripening markets, colonialism, caste and class division, austerity, war and political turmoil contribute to violence, gendered violence and to the conditions for genocide the world over.
With a generous familiarity, Okot Bitek engages and transmutes an African and East-African sense of community, aspects of diaspora, and transitory belonging within North American systems and experience. Her poetry compels us to do our own work to account, relate and strengthen. We remain determined to create and therefore to act. Although the poems specify land and people closer to her Ugandan homeland, Okot Bitek’s insights resonate in relation to the genocide of Indigenous peoples in Canada and elsewhere arund the world. However at home we may be in the traditional and ancestral territories of Indigenous Peoples, this poetic project is aware of ongoing disjuncture. It question the rote offerings of an insincere, immaterial and governmental “reconciliation.”(Cecily Nicholson, “Foreword”)

The latest title in the University of Alberta Press’ “Robert Kroetsch Series” is Juliane Okot Bitek’s 100 Days (Edmonton AB: University of Alberta Press, 2016), a collection of one hundred poems through one hundred days of the 1994 Rwanda Genocide, counting down through poems beginning with “Day 100,” living the narrative out in reverse. As the book is described on Bitek’s website, 100 Days is “a poetic response to the twentieth anniversary of the 1994 genocide in Rwanda. Inspired by the photographs of Wangechi Mutu, [as] Juliane wrote a poem a day for a hundred days and posted them on this website and on social media — Facebook, Twitter, Instagram.” To open her “Author’s Note” at the end of the collection, she describes the project in more detail:

AT THE BEGINNING OF APRIL 2014, Wangechi Mutu, a Kenyan American artist, posted daily photographs tagged #Kwibuka20 #100Days on Facebook and Twitter. I knew immediately that they presented an opportunity for me to engage with the 1994 Rwanda Genocide, a period that I’ve thought about for the last twenty years. I contacted her and we began a collaboration of sorts; I wrote a poem and she posted a photograph for all the hundred daysthat has come to symbolize the worst days of the genocide in Rwanda. One hundred days of killing, one hundred days of witnessing, one hundred days of everything else that seemed to matter and then it didn’t, it couldn’t. And just lke that, twenty years has passed and there was a need to remember. 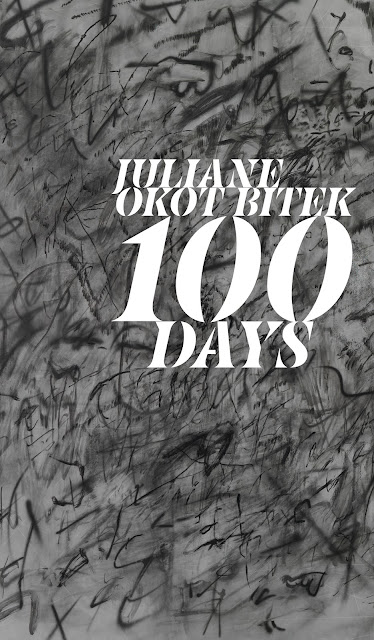 Bitek’s poems are fierce, directly straightforward and unrelenting, composing her poems in an unadorned manner that increase in tension through the accumulation. As she writes in “Day 88”: “someday we will grasp / the emptiness / inside one hundred days [.]” There is a proclaiming element to her lines that give the impression that this is a collection to be heard in performance as much as read on the page, and an honesty and comprehension of her subject matter that allows her to speak, openly and directly:

Part of what makes the collection so engaging is in the way she focuses on intimate spaces and details, refusing to utilize the form for a simple re-telling of history (which, frustratingly, so many poets tend to do) but engaging the smaller moments. The witness here is personal and deeply felt, even when she writes on large abstracts, proclaiming in broad gestures, exploring through the lyric a human tragedy so brutal and extensive that it becomes unfathomable. “[E]ven time measured in machete strokes” she writes, at the end of “Day 91,” “can never be accurate [.]”