C.D. Wright, The Poet, the Lion, Talking Pictures, El Farolito, a Wedding in St. Roch, the Big Box Store, the Warp in the Mirror, Spring, Midnights, Fire & All

Between great hails to the imagination and salvos of opprobrium, William Carlos Williams set one sharp-edged poem after another into the composition of an unframed original. So the one who did not cast off his roots chose the eldest trope in the book, SPRING, to push and pull American poetry into the present tense. Not before he had initiated a willful number of false starts, cranking up anticipation and repeatedly sabotaging expectations. Not before the hectored reader was fetched up “by the road to the contagious hospital,” only then would the first glimpse of grass and “the stiff curl of wildcarrot leaf” be permitted—at the precise point at which every stick in the refuse emerged particular. Terrifying, as Robert Creeley was given to say. 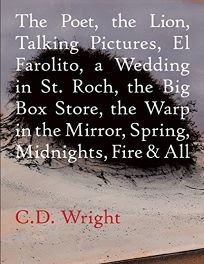 In a Word,
a World

I love the nouns of a time in a place, where a sack once was a poke and native skag was junk glass not junk and junk was just junk not smack and smack entailed eating with your mouth open, and an Egyptian one-eye was an egg, sunny-side up, and a nation sack was a flannel amulet, worn only by women, to be touched only by women, especially around Memphis. Red sacks for love and green for money. Of course the qualifying adjective nation does exercise an otherwise eventful noun.

It is not that the writing is hermetic; in fact, I believe its entire pitch and purpose is openness. I grasp that the whole life—of loving and losing, erring and righting, reading and thinking, saying and seeing—is faithfully recorded, word for word, and submerged under each elliptic dot. She is “shy of words but desperately true to them,” wrote Seamus Heaney. “Looking into a Jean Valentine poem is like looking into a lake,” wrote Adrienne Rich. I think I see what Valentine sees: her own outline and what has settled below. But I am wary of describing it.