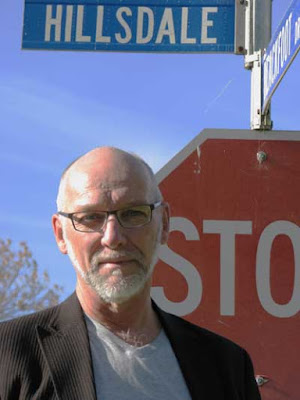 Gerald Hill [photo credit: Mark Anderson] has published six poetry collections — two of which won Saskatchewan Book Awards for Poetry. His latest collection, Hillsdale Book, came out with NeWest Press in April, 2015. Two sub-sets of that book were published in 2012: Hillsdale, a Map, produced with designer Jared Carlson, and Streetpieces, a chapbook produced by David Zieroth at The Alfred Gustav Press in Vancouver. Also in 2015, Hill published A Round for Fifty Years: A History of Regina's Globe Theatre with Coteau Books. Widely published in literary magazines and online journals, active as both organizer of and participant in workshops and readings, conferences and courses, and winner of Second Prize in the 2011 CBC Literary Awards, Gerald Hill is newly retired from his career teaching English and Creative Writing at Luther College at the University of Regina. In the fall of 2015 he was Doris McCarthy Artist-in-Residence at Fool's Paradise in Toronto.

1 - How did your first book change your life? How does your most recent work compare to your previous? How does it feel different?
When good things happen, I nod and say that’s just the way the universe is supposed to work. No big deal. That’s how I felt when that first book came out (in 1985 from Thistledown). This theory was tested in the 16 years before I published my second book (The Man From Saskatchewan, Coteau, 2001)—years spent at grad school, raising kids, recovering from a broken marriage, with most of my writing done in summers at Emma Lake, Sask. That first collection was very much a collection of lyric poems. Now I write books, not poems. It’s all about the book concept, with individual pieces serving as just that, individual pieces that need not produce a well-wrought urn, say, on their own. It’s a longpoem approach very much in keeping with my first teacher, Fred Wah, at David Thompson University Centre in Nelson, B.C., 1981-82. I’ve always said, though, that I’m grateful for the teaching of Fred and Tom Wayman and Dave McFadden at DTUC and see my own work since as essential a blend of those three writers’ approaches.

2 - How did you come to poetry first, as opposed to, say, fiction or non-fiction?
We produced work in all genres at DTUC. The poetry emphasis for me may have been an echo of my father, a Sask schoolteacher, who often recited poetry to his kids as we were growing up. He’d had an old-school education that involved, apparently, much memorizing and oral recitation of poetry. Or the poetry thing derives from those teachers I mentioned, who demonstrated that, all in all, anything was possible with poetry.

3 - How long does it take to start any particular writing project? Does your writing initially come quickly, or is it a slow process? Do first drafts appear looking close to their final shape, or does your work come out of copious notes?
All of these things vary. I’ve never had a problem coming up with something to write. I’m one of those who believes that if you keep the daily process going, the larger project will reveal itself, as if I’ve been working toward it all the time even before I knew it. I save hard copy drafts now, with one eye on the archive. (URegina holds the Gerald Hill papers, such as they are.) But yes, initial entries come relatively quickly; I know enough, I think, just to get stuff down knowing I’ll work on them later, a slower process. Along these lines, I really like Michael Ondaatje’s note, in his Afterword (or Foreword is it?) to the newer edition of The Collected Works of Billy the Kid, about just writing ahead, not looking back. For a long time before you start revising.

4 - Where does a poem usually begin for you? Are you an author of short pieces that end up combining into a larger project, or are you working on a "book" from the very beginning?
I rarely assume that the piece I’m working on is discrete unto itself. It’s always a page or fragment of the larger whole. As poems are not about closing in on themselves but gesturing open to the larger constellation.

5 - Are public readings part of or counter to your creative process? Are you the sort of writer who enjoys doing readings?
I do enjoy readings and think I do them well. I like that preparation for public performance brings a different set of editing principles into play. What I don’t like so much is the sense that getting ready for a reading necessitates getting out of the daily flow of exploration of new work.

6 - Do you have any theoretical concerns behind your writing? What kinds of questions are you trying to answer with your work? What do you even think the current questions are?
One way of addressing those questions is to suggest that what I do is deal with/ explore/ fool around with/ dodge the “I”. As a good subject of postmodern and post-structuralist literary theory 25 years ago, I learned—thank God or somebody—to mistrust the authority of that pronoun. The lyric poet is locked into that authority. A poet who works in more open forms—which is where I place myself—will undercut the “I” much more, playing with what we see to be its inherent slipperiness. As a teacher (a job from which I retired just last year) I tried to deny my students the apparatus of nailing down what a poem supposedly means. It was about submitting and allowing the poems contradictory effects to work on us, rather than us on them. The general issue here is openness, multiplicity, polyphony, etc.

7 – What do you see the current role of the writer being in larger culture? Does s/he even have one? What do you think the role of the writer should be?
Beyond my largely ceremonial (but I’m working on it) role as poet laureate of Saskatchewan intending (without much budget) to spread the word of poetry in the larger society, I don’t think the writer has any role in larger culture, necessarily. A writer’s duty is first and last to his/her work.

8 - Do you find the process of working with an outside editor difficult or essential (or both)?
I’ve had good luck with my editors (incl. Dennis Cooley, Jeanette Lynes, Douglas Barbour, Don Kerr) for the most part. In my experience, they seem less interested in what I imagine the larger theoretical concepts of the book to be, preferring to focus on how bits of text work. I have noticed that I enter an editor-writer relationship warily.

9 - What is the best piece of advice you've heard (not necessarily given to you directly)?
What comes to mind right now is Ondaatje from In the Skin of The Lion. Trust me, there is order here. Very faint, very human. That’s a paraphrase of what the narrator says at one point—true of the main character and the text in which he appears. So, forget what you think you’re doing. Forget meaning. Forget overly elaborative linking passages. Downplay endings. Trust. You’ll figure out and get to where you’re going sooner or later.

10 - How easy has it been for you to move between genres (poetry to non-fiction)? What do you see as the appeal?
Easy. Both are wide open.

My blog entries over the years (http://poetshoes.blogspot.ca/) have often served as versions of poems, and vice versa.

11 - What kind of writing routine do you tend to keep, or do you even have one? How does a typical day (for you) begin?
The day begins with sudoku and kenken puzzles. Beyond that it depends on how my body is feeling today, what errands I have to do, what deadlines I’m facing. If I’m generating new material, I’m probably walking and sitting down someplace with my notebook or tablet. It becomes an intense paying of attention to the specifics of where I am mixed, as always, with whatever comes up from inside. Generally, mornings for new work. Afternoon or evening for revision work.

12 - When your writing gets stalled, where do you turn or return for (for lack of a better word) inspiration?
To the next page. It’s always a way out. Or to my library, reading my way out.

13 - What fragrance reminds you of home?
If I ever get my nose on a palm springs cake, that will do it. Caragana hedge and lilac. Fresh-baked bread. Model glue (I specialized in WWI aircraft).

14 - David W. McFadden once said that books come from books, but are there any other forms that influence your work, whether nature, music, science or visual art?
Absolutely. We can learn from artists and works in any discipline. I learned many years ago at Emma Lake that painterly concerns—the continuum of abstraction to representation, for instance—were also writerly concerns. Their solutions might be ours. Dance, theatre, visual art, music—any discipline that calls for and evokes the great highs and lows of human existence and explores its generic protocols—will be instructive for writers.

15 - What other writers or writings are important for your work, or simply your life outside of your work?
I got rid of hundreds of books in the last couple of years. I kept about 40 in my tiny apartment: Anne Carson, Daphne Marlatt, Charles Olson, Lorca, Borges, Kroetsch, Calvino, Pessoa, Basho. Saramago, W.C.Williams, Wah, Stevens, Cortázar, Kerouac (my first literary hero, if I don’t get a chance to say this somewhere else), Salinger, Carver, Simic, Ondaatje, bp.

16 - What would you like to do that you haven't yet done?
Live for a year in southern Spain. Win the G-G, why not. See my work, and that of many other writers we could name, get thoughtful critical attention. Create an endowment that would fund a fabulous writer’s retreat.

17 - If you could pick any other occupation to attempt, what would it be? Or, alternately, what do you think you would have ended up doing had you not been a writer?
I was a teacher off and on, here and there, for 40 years. A good one, for most students. An effective writing and literature teacher. For a while I wanted to be a sportswriter. Now that I’m older, I’d love to run—or create, get someone good to run it—a pub that showed what good service means.

18 - What made you write, as opposed to doing something else?
Probably had something to do with my dad’s books and poetry recitations. And being read to. Over the years, however, what has made me write is the sense that it is as a writer that I am most Gerry Hill.

19 - What was the last great book you read? What was the last great film?
They happen to be the same. Brooklyn. In both cases, I marvel at how the story is told. And the movie, of course, has what’s-her-name—the Irish/American actress nominated for the Oscar. She’s fabulous. I loved Fifteen Dogs as well. Poetry I raid, not read—dipping in and out of Carson or Lorca or . . .

20 - What are you currently working on?
I have a book, poems, begun last summer. Dogabout, I call it. Its central character is a man named dog (lower case) though I’m running into so many dogs in literature these days that I might have to come up with something else. I know I’ve got an idea that’s good when it gives me everything I want in writing, as this one does. Doesn’t matter where I am. In January I sent every page of Dogabout—now in its 8th draft—to various journals. I sent another manuscript to a publisher in January also. And I have another one that’s been knocked back a couple of times.

[Gerald Hill reads in Ottawa on Tuesday, March 15 as part of the opening night of VERSeFest 2016]