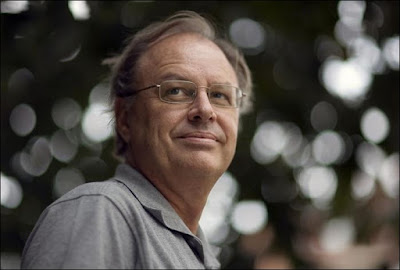 Trevor Ferguson (a.k.a. John Farrow) is the author of eleven novels and four produced plays. His crime novels, City of Ice and Ice Lake, under the name John Farrow, were published in major markets around the world and reissued in 2011 by HarperCollins. Booklist praised the Farrow series as the best of our time, while Die Zeit in Germany called it the best in history. River City, which covers over 450 years of Montreal history written as a crime novel, the third in the Farrow series, was released by HarperCollins in 2011 (pb 2012) to impressive critical success. His literary novels, such as Onyx John, The Kinkajou, The True Life Adventures of Sparrow Drinkwater and The Fire Line, enjoyed dazzling critical acclaim. His most recent literary novel is The River Burns (2014, pb 2015, Simon & Schuster). The Timekeeper (1995, HarperCollins) won the Hugh McLennan Prize for Literature and was produced as a feature film. One of his plays, Long, Long, Short, Long received an audience of over 22,000 in its second run, while another, Zarathustra Said Some Things, No? enjoyed a stupendous critical reception Off-Broadway. A new trilogy in his crime series (as John Farrow) is underway, having begun with The Storm Murders (May, 2015), to be followed by Seven Days Dead (May, 2016) and The Talisman Quarry (2017), all published by Minotaur/St. Martin’s in New York. He presently is writing the next Farrow novel and living in Hudson, Quebec.

He was writer-in-residence at the University of Alberta during the winter 1992 academic term.

Q: When you began your residency, you’d already published three novels. Where did you feel you were in your writing? What did the opportunity mean to you?

A: The opportunity was a game-changer in both expected and unexpected ways. My fourth novel was finished, and while in residence I was able to complete the edit of that book, as I had hoped. I was also moving my fiction in a fundamentally different direction back then. The Fire Line, written in Edmonton, was a difficult project in that its diction and accouterments, momentum and content were in sharp contrast from what I had been doing. That drastic a shift always takes time and concentration, which were afforded me by the residency.

My stint in Alberta helped in other ways though. It allowed me to get my feet wet with respect to teaching and the academic environment, having never been a university student myself. That led to teaching Creative Writing on a part time basis after that up until this year. I would not have been permitted through the door at Concordia University without the U. of A. experience. Obviously, this became a huge, and as I say, unexpected, benefit, which allowed my career as a writer to continue, as well as introducing me to a secondary career which I have much enjoyed.

Also, in Edmonton, my wife and I lived in an unattached house and not an apartment for the first time in our lives. We enjoyed that aspect. Returning home, we went out and bought a house. Without the Edmonton experience, that may never have happened. So that fundamentally changed my life as well.

A: I was writing a novel at the time (The Fire Line) that is set in northern B.C., and the book that was to follow (The Timekeeper) starts out in northern Alberta and extends into the Northwest Territories (called that in the book’s day). Quite possibly, being back in Alberta instigated the latter. The novel derived from my experience as a runaway in my mid-teens, so it was good to be back for a return visit and under much improved circumstances. I had, in fact, committed my life to writing during that earlier time so enjoyed noting the improvement in my fortunes (“The last time I was in this town I was starving”). So yes, my many drives across the countryside, no longer penniless and desperate, served to both adjust and deepen my appreciation of the prairies and moved my fiction back west for a time.

Tom Pow was over from Scotland then on a residency exchange, and Greg Hollingshead was overseeing the program, and we formed something of a merry band. Greg made a point of connecting me to the broader community in Edmonton, particularly, so I had many good times among other writers, both informally and at events. I recall having the whole faculty (it seemed, anyway) out to a reading and talk I gave, something that doesn’t happen too often elsewhere. Normally, only a grudging few show up. Mind you, I do recall one faculty member expressing disappointment that I was too well behaved for a writer, neither a dipsomaniac nor a philanderer, as he preferred his writers to enliven the university environment with a dash of scandal. I pointed out to him that living as an organ-grinder’s monkey loses its charm soon enough.

Q: What do you feel your time as writer-in-residence at University of Alberta allowed you to explore in your work? Was it an opportunity to hunker down and focus, or was it more of an opportunity to expand your repertoire?

A: My work was undergoing what felt like a polar shift, which it has the habit of doing every dozen years or so. So urban, contemporary, complex, sprawling family sagas were giving way to quasi-folkloric, wilderness, male-centric and violent tales of the Canadian north. This meant, on this occasion, a change in how the language was being deployed, new rhythms, a new sound, the exploration of a different diction, as well as a shift in how the stories evolved—toward tighter, more compact, more driven narratives. As a novelist, hunkering down is perpetual, that never changes, but I think the abrupt alteration to daily routines—the familiar transplanted by the fresh—was undoubtedly beneficial in aiding my headspace to welcome and adjust to the change in direction.

A: One of the beauties of the residency for me had to do with the variety of work that came across the transom, and manuscripts arrived weekly, which dovetailed with the variety of the encounters. Older folks and quite young. Avid readers and writers were juxtaposed with those dipping their toes in their creative waters for the first time. I met folks in my office and off-campus, as well, whatever worked best. Quite a few family histories appeared, many interesting, although the form rarely finds a home. One gentlemen I visited was a quadriplegic, and therefore confined to his home and subject to continuous care. Writing was critical for him as an emotional lifeline. I taught students in other English classes, including a post-grad group at one point where we got into a hot discussion on the nature of plot. During a break I rapidly wrote a position paper in bullet-poem form (a new genre) that I’ve used in my own classes ever since. Another class was so early in the morning I’m really not sure that anyone could be accused of being wide awake at the outset, but we had a few laughs before we were done. I worked very extensively on a novel with one philosophy grad, no longer a student at the time, a man in his thirties, and I’m not sure that that book found the light of day, although I traced it’s progress, or its lack, for years after the residency had ended. I thought it was a good novel and regret that it was never published, to my knowledge. A student who did fulfill his considerable promise, with whom I worked on a collection of stories that would be published, was Curtis Gillespie, who, of course, became a Writer-in-Residence at the university himself one day.
Posted by rob mclennan at 8:31 AM
Labels: HarperCollins, interview, John Farrow, St. Martin's, Trevor Ferguson, University of Alberta, writer-in-residence