it is astonishing each morning that we wake up sane

and you with your tiny stink

The powerful and seemingly quickly-sketched poems that make up Madison, Wisconsin poet, fiction writer and clinical art therapist Lissa McLaughlin’s latest poetry collection, Quit (Providence RI: Burning Deck, 2015), emerge from her work as a “grief worker at a hospice.” Her deceptively-small book, which shares elements of the daily journal (whether personal or professional), packs quite a punch, writing on grief, death, loss, possibility and the ordinary matters and frustrations, within all of this, of daily work. So much of the emotion of these poems live on the surface of the skin, packing an enormous amount into small spaces. The poem “the creation of death panels,” for example, opens: “my mother was named after a suicide                        so / why blame her // for hating a name like herself // or the belief circulating / freely in her family that nothing // kills like disgrace [.]”

why didn’t you send for me sooner

shakes her head at
medicine

misgivings in a cup
lift your head to 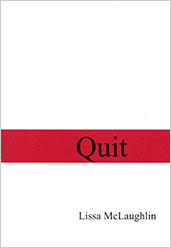 In McLaughlin’s poems, life and death is daily but never rendered mundane, and her poems turn quickly from rushed observance to meditative elegy to daily report, often in the same breath. Given the nature of the work, even the smallest moment can become urgent, and her poems articulate that urgency, such as the poem “why didn’t you send for me sooner,” or “remember, gasping is not breathing.” There is an intriguing element of the poems in Quit that is shared with “work poetry,” a term coined and championed by Tom Wayman in the 1970s, but the collection is far more reminiscent of Ottawa writer Andrew Steinmetz’s memoir Wardlife: The apprenticeship of a young writer as a hospital clerk (Vehicule Press, 1998), a collection of short, sharp prose vignettes chronicling his time in the Intensive Care Unit and Emergency Department of a Montreal hospital. As McLaughlin is quoted on the press release for Quit:

“Writing Quit took some athleticism,” the author says, “Fleeing the job I loved I needed to move language, and fast. First raw discharge, then a kind of essay (quoting Buddhist texts; clinical reports; histories of Bedlam, and research into the prevalence of personality disorders in business executives), Quit alternately tensed up and softened. Footnotes disappeared. Humor tried to enter. Lines reincarnated. Ultimately, the distinctions between patient and healer, worker and boss folded up under the recognition that the dying remind us of ourselves. If we can just let life digest us, we might finally taste joy.”