Brian Teare, The Empty Form Goes All the Way to Heaven 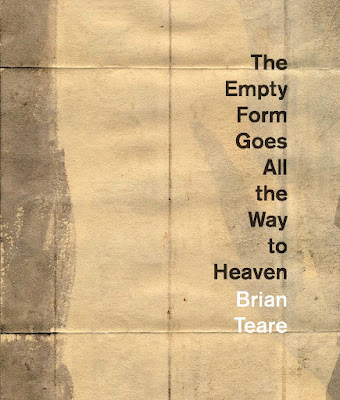 The Empty Form Goes All the Way to Heaven (Boise ID: Ahsahta Press, 2015) is Philadelphia poet and publisher Brian Teare’s fifth trade poetry collection, after The Room Where I Was Born (University of Wisconsin Press, 2003), Sight Map (University of California Press, 2009), Pleasure (Ahsahta Press, 2010) and Companion Grasses (Richmond CA: Omnidawn, 2013) [see my review of such here]. As Teare describes in the preface to the collection, The Empty Form Goes All the Way to Heaven is a poetry book constructed from the onset of his own illness, which prompted his discovery of the infamously reclusive American (born and raised in Canada) abstract expressionist painter Agnes Martin (1912-2004). He writes: “When in 2009 I began writing the poems in this book, I knew nothing about Agnes Martin. Early during the onset of a chronic illness, I opened her Writings and found ‘The Untroubled Mind’ to be a comfort. But as the illness deepened I began to ‘seek her out’ when I could through research in museums, libraries, and archives. These poems set my life in relation to my long encounter with her painting, drawing, writing, and the metaphysics she argued was implicit in them.” Known for her use of lines, grids and fields of subtle colour, Teare’s poems employ an intriguing structural influence from Martin’s artwork, stretching her colour field into a series of texts stretched across the field of the page (and the book is 8 inches by 9.5 inches, in case you are wondering the size and scope of his physical field). Certainly, Teare’s use of empty space and the length and breadth of the page isn’t new, as evidenced from his Companion Grasses, but the influence of the grid structure from Agnes Martin allow for a curious exploration of how words are shaped, and even read, playing off each other in nearly-overlapping lines. In a recent interview with Christy Davids on the new collection, posted at The Conversant, he writes:

In both Sight Map (University of California 2009) and Companion Grasses (Omnidawn 2013), I was working off of my own kind of personal reading of Olson’s “Projective Verse”—I think that’s not surprising for anyone who knows my work—and in Companion Grasses that was particularly true in terms of thinking about prosody, and also thinking about poems on the page as being a scoring of an encounter with a place or a species. Because so many of those poems—all of them, really—were written on foot, were written in the field, I was really trying to use prosody and typography as a musical registration of an encounter, and combining Olson’s belief in the page as a kind of musical score with the ways in which breath and ear change in relation to whatever you’re in relation to. I was interested in the phenomenology of prosody—that it could, theoretically, capture or register relation differently between each encounter with place, with species, with a particular day or meteorology or whatever.

As well, unlike Martin’s reluctance, if not refusal, to release biographical detail, Teare’s The Empty Form Goes All the Way to Heaven directly engages his illness, as he writes to open the poem “We are not the instruments of fate nor are we the pawns of fate we are the materials of fate.”: “I leave each doctor’s appointment ashamed to be ill // the philosopher argues the verbal expression of pain // undiagnosed my body so illegible no one can read it // replaces pain without offering a description of it [.]” As part of his author biography at the Ahsahta Press website, Teare offers:

I hate that a biography like this largely leaves out the formative details: a difficult family life, the disaster of coming out in the rural South, my first love dead of AIDS, falling in love again in California, years of chronic illness, my discovery of meditation. True to my early schooling in Confessional writing, these narratives are in my books. But more importantly, my books understand autobiography to be as much intellectual as physical, as aesthetic as it is emotional. I’ve striven to fashion a poetics that can inscribe experience on all the registers on which it occurs: high to low, abstract to literal, philosophy to pornography. Similarly, I’ve striven to render the poem’s form flexible and sensitive enough to register the myriad shifts native to experience. Inspired in equal parts by Charles Olson’s essay on projective verse and my training as a letterpress and digital typesetter, I’ve recently come to believe that design is both proprioceptive and plastic, capable of carrying embodied knowledge and visual information that exceeds the semantic. The poems of The Empty Form Goes All the Way to Heaven are the direct expression of this belief.

The poems in The Empty Form Goes All the Way to Heaven are structured in three untitled sections, with poems floating through direct and indirect reference and response to, and influence from, Martin’s artwork and writing, as well as his own ongoing illness. As the poem “Defeated you will stand at the door of your house and welcome the unknown.” begins: “chronic nausea / chronic non // narrative even / the public health /                                  eventually the surface gets interesting [.]” The introduction of a further abstraction into his work is quite compelling, compared to the more direct lines and lineages of Companion Grasses, and allow for a far more visual and meditative flow, expanding his repertoire to extend into a deeper use of the fragment, collision and critical intelligence. His utterly fascinating author statement on the Ahsahta Press website (I find myself quite taken with the clarity and ease of his prose) ends with:

I worked on the poems for six years. Keenly aware that Martin herself avoided autobiographical narrative in her writing and representation in her visual work, I couldn’t help but think that chronic illness seemed the perfect fusion of autobiography and formal abstraction. Pain was largely wordless, but it was also my life—a somatic texture in which illness became a chronic duration and duration (time) became texture (form). And things anyways happened. Over those six years, I got access to public health care and exhausted my treatment options without getting a diagnosis, I started seeing a Chinese medical practitioner for herbs and acupuncture (which helped), and I also started a meditation practice (which helped). But I remained ill. And I kept returning to Martin and her work, even going to museums, libraries, and archives to get “closer” to her, the way young curators and artists had once sought her out in the desert of New Mexico.

Eventually I realized I’d been looking for someone or something to help me change my life. I’d been seeking healers and teachers, some of whom did in fact help, some of whom didn’t. Eventually I ended up in the hospital (again) and realized help might not be coming, at least not in the form I’d wanted. Lying on the gurney, I asked: What’s the right attitude toward suffering? An answer came: It neither lies to you nor makes you suffer more. And more than my own suffering I heard the man in the room next to me weeping as a doctor drained his wound. When I stopped wanting a teacher, when I stopped waiting for an end to suffering, my life did change. I did in fact suffer less. When I gave up the illusion of salvation, I found a modicum of rest and some room for the experience of joy. When I stopped needing Martin to help me, I could finally look at her work in companionable awe.

This is a fascinating review (and introduction). Will look for this book -- and the others too. Thanks for alerting readers to Brian's work.