if I had a preference
this would not be it

color combinations
that make you cry

less & less sense
in the powerful
passage of time

I’m finally getting into Washington D.C. poet Buck Downs’ Tachycardia: Poems 2010-2012 (Washington DC: Edge, 2014), a collection of short, experimental lyrics. Not that, as he discusses in a recent interview online at DC Poetry, he considers himself an experimental poet:

So I have been tagged, typically by (here come some terms of dubious relation) conventionalist poets as an experimentalist for two reasons: A) I spend too much time loudly insisting that, e.g., Mark Rudman, Garrett Hongo, and any dozens of others, are more or less completely and willfully out of touch with what poetry might be or should be in an age of media and continue to lean on the crutch of pre-20th century “literature” to keep their students in line and keep their academic hustle intact; and B) My running-buddies have been people who will put up with point (A).

Still, the poems have a way of moving that is quite unique, bouncing from point to point, meandering down and across the page through a sequence of moments, ideas and thoughts, suggesting a particular kind of narrative that may or may not be deliberate (and yet, appears carefully so). As Tom Hibbard discussed one of Downs’ prior collections, Marijuana Soft Drink (Edge Books, 1999), in a December 2000 review in The Washington Review (reprinted online at Jacket Magazine): “The author may be putting these words together with his own subtle plan, but the words and phrases themselves are those he has observed huddled in the spotlight. The book is a cemetery of words. It is more a collage of words than grammatical sentences, exhibiting ‘wordfulness’, the constructive and destructive creative power of the word in general.” 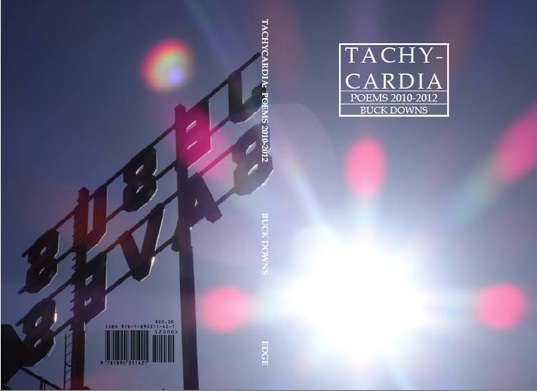 Each of the poems in Tachycardia: Poems 2010-2012 seem to open initially into a small moment and swirl out from that centre, sometimes keeping to a particular orbit, and sometimes spiraling far out of range, but never out of control. And yet, control seems to be a central point in the construction of Downs’ poems: that he, as the author, doesn’t attempt to exercise any obvious outside control over the poems, instead allowing them to move in ways that go against conventional wisdoms and obvious narratives. His poems flow out across ideas in the most natural of ways, seemingly to see where, in fact, they might end up. It is with this, combined with Downs’ obvious skill and curiosity, that makes the poems so endlessly readable, if not necessarily the most narratively straightforward, which seems entirely the goal.

I am slowly
racking up

if and when
the yes/no
furniture
is bumping
in the next room,
upside
like boxes
of books
upside
your head –
right now I feel
each & every
one of you

a surrogate
misfit-
family I
belong in.
the rose
of poesie
rose up. & got
the new job.

Given I haven’t any prior knowledge of Downs’ work—whether Ladies Love Outlaws (Edge Books, 2006) or the aforementioned Marijuana Soft Drink —I’m curious to know how much these lyric bursts from a two or three year period (one can’t know how early in 2010 these poems began, or how late in 2012 they were completed) are similar with his other writing, whether before or since, and even, possibly, if he was doing any other work concurrent to this. Is this simply the best of the writing he did within that particular stretch of time, or were they part of a project with another structure (whether structural or thematic) we (or, singularly, I) aren’t yet aware of?