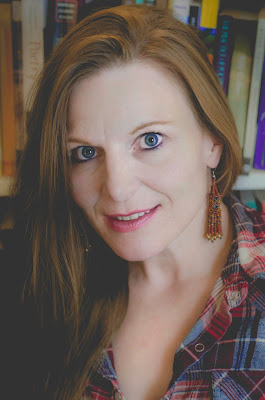 Lynn Marie Houston is the author of The Clever Dream of Man (Aldrich Press), a book of poems about relationships between men and women. Her poetry has garnered the following: a Pushcart Prize nomination, two Best of the Net Award nominations, second place in the National Federation of State Poetry Societies 2015 competition, and an honorable mention in the Whispering Prairie 2015 Poetry Contest. In addition to being a poet, she is the founding editor of Five Oaks Press. She holds a B.A. from Hartwick College, a Ph.D. in English from Arizona State University, and is currently pursuing her M.F.A. degree at Southern Connecticut State University. Visit her writer's website at https://lynnmhouston.wordpress.com or contact her at lynnmhouston@gmail.com.

1 - How did your first book change your life? How does your most recent work compare to your previous? How does it feel different?
My first poetry book has become like a calling card that has gained me entrance into some circles of writers. When you have a book, people will ask you to do readings. In other ways, too (like doing this interview!), you become part of the community of writers in a more meaningful way than before you had a book.

2 - How did you come to poetry first, as opposed to, say, fiction or non-fiction?
I began my career as a writer of academic prose, which is often dry and boring, and sounds like a bad translation from the French (sentences are passive and noun-phrase heavy). After realizing that I had more to offer in terms of my writing skills, I felt compelled to explore more creative forms of writing. I turned first to literary nonfiction (which I still pursue as a second genre) but realized my favorite nonfiction pieces were more like poetry. I wrote (bad) poetry as a teen, so when I finally made a commitment to poetry writing it was like a homecoming.

3 - How long does it take to start any particular writing project? Does your writing initially come quickly, or is it a slow process? Do first drafts appear looking close to their final shape, or does your work come out of copious notes?
I write almost every day, usually just jotting down quick notes that I keep in a file and come back to when I can clear a block of time. I am capable of producing a full-formed poem straight out of the gate about once every month or two, but most of what I write requires the magic of revision. I find that those times when I produce something ready-to-go are the times when I am most tapped into a sense of voice. But honestly, I love the wrestling process of revision. That’s what feels like real writing to me. Tapping into a voice feels more like channeling than the real work of writing.

4 - Where does a poem usually begin for you? Are you an author of short pieces that end up combining into a larger project, or are you working on a "book" from the very beginning?
My poetry mentor, Vivian Shipley, has often showed me how my first drafts are really two poems that I’ve shoved into one. We call them “two-fers.” Just last month, I produced my first “three-fer” (a three part poem whose parts weren’t working well together and which has since become three separate poems). I have a tendency to overwrite in drafts, so my revision process involves cutting back quite a bit. Most of my poems begin with one key phrase that comes to me. And for most of my poems, I end up having to “kill that darling,” as they say, by deleting the line that produced the whole poem. About 75% of the time, that initial phrase doesn’t survive the decisions made in the revision process.

5 - Are public readings part of or counter to your creative process? Are you the sort of writer who enjoys doing readings?
My poems are made to read aloud. I love doing readings even of my newest stuff. I enjoy learning from audiences’ reactions and from other poets when they perform their work with passion and integrity.

6 - Do you have any theoretical concerns behind your writing? What kinds of questions are you trying to answer with your work? What do you even think the current questions are?
I am always interested in questions about gender differences and the problems that result from the different ways our society views men and women. I’m interested in the ethics of self versus other and how we might reconceive of that (false) dichotomy. I’m very interested in the material conditions of daily life that shape or are shaped by the fact that humans have bodies, mortal ones.

7 – What do you see the current role of the writer being in larger culture? Does s/he even have one? What do you think the role of the writer should be?
Recent American political regimes have dismantled arts education (dismantled education altogether). It’s easier to get citizens to respond from a position of knee-jerk, base emotion when they are not educated. This benefits a certain U.S. political party whose platform only works when they can elicit fear and hatred, and when their constituents don’t understand the rules of logical argument or how to properly research facts. Given all of the above, I think a writer’s role in culture is similar to that of an educator’s. But the tools and context are different.

8 - Do you find the process of working with an outside editor difficult or essential (or both)?
For me, writing is always some part collaborative. The feedback I receive on my work is essential.

9 - What is the best piece of advice you've heard (not necessarily given to you directly)?
“Do you want to be right? Or do you want to be heard?” This advice is about considering audience, but it’s also about so much more.

10 - What kind of writing routine do you tend to keep, or do you even have one? How does a typical day (for you) begin?
I teach, I run a press, and I’m currently pursuing an M.F.A degree at Southern Connecticut State University. The poetry workshops I take as part of my program have writing assignments and critiques built in, but on university breaks I try to clear large blocks of time to just sit with my files of ideas for poems. I can write all day for about five days before I start to flag. I’ve signed up for the Tupelo Press 30/30 for the month of January, so I will be writing a poem every day for 30 days. It will be a test of my writing endurance.

11 - When your writing gets stalled, where do you turn or return for (for lack of a better word) inspiration?
I have more ideas for writing than I have time to write so I don’t really get “stalled” in the sense of getting writer’s block. Sometimes my craft stales and I’m not able to achieve the effects I want with my skills. I just keep at it. I have a poem coming out in Blue Lyra Review (“Jealousy”)—it was one that came out fully formed after I’d been writing crap for about three hours. Sometimes you just have to be fully warmed up before the good stuff comes out.

12 - What fragrance reminds you of home?
When afternoon sunlight warms decaying leaves. (I'm from NY's Hudson Valley region, where the fall season in the Southern Catskills is a spectacular show; I don't know why this came out so Faulknerian).

13 - David W. McFadden once said that books come from books, but are there any other forms that influence your work, whether nature, music, science or visual art?
Nature is my biggest inspiration. I’m looking more to science for how I include natural themes in my writing. Sometimes a song I hear puts a rhythm in my head that later produces a poem, but I can’t write with music on; I need silence. Also, I’m trying to write more from my body, which I think holds a kind of record of thoughts, feelings, and impressions about the world.

14 - What other writers or writings are important for your work, or simply your life outside of your work?
The poets who are involved with the Connecticut Poetry Society have been very generous in reaching out to me and creating a sense of community for their members. The poets my press has published (Five Oaks Press) have also shaped me and often remain in touch as friends. Of course, my mentor Vivian Shipley is a near-daily positive influence on me.

15 - What would you like to do that you haven't yet done?
Be in a long-term romantic relationship with a man who loves me.

16 - If you could pick any other occupation to attempt, what would it be? Or, alternately, what do you think you would have ended up doing had you not been a writer?
I would have liked to be a woodworker. I own a table saw, a router, a miter trimmer, clamps, etc. What I like making the most are picture frames. There’s something so satisfying about a good corner join, something so harmonious about ninety-degree angles. These same tools were what I used to renovate a 1968 Airstream camper. I was living in the Airstream (with a composting toilet I built myself and a solar-powered 12-volt light system) when I wrote my first poetry book, The Clever Dream of Man.

17 - What made you write, as opposed to doing something else?
When I was a child, literature was a great comfort to me, a safe space. I want to help create that space for others to enjoy.

18 - What was the last great book you read?
Fear and What Follows: a memoir by Tim Parrish, who teaches in the program at Southern Connecticut State University. It’s about being indoctrinated into racism while growing up in the South. This book is beautifully written with complex character development and is a brilliant illustration of the concept that a writer functions as a public intellectual and educator.

19 - What are you currently working on?
I’m currently working on a project within “postpastoral poetry.” It’s a camping-themed book of poetry, and I’m trying to write about human interaction with nature in a way that doesn’t make nature merely a reflection of human emotion. In other words, I’m trying to tackle environmental crises through the human values that promote them without committing the pathetic fallacy.