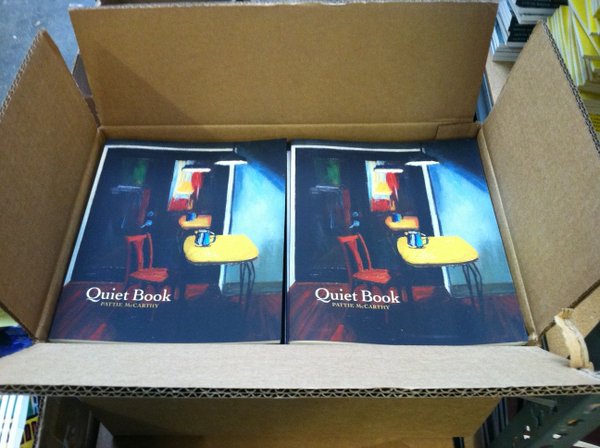 Philadelphia poet Pattie McCarthy’s sixth trade collection is Quiet Book (Berkeley CA: Apogee Press, 2016), a collection focused on domestic patter and patterns, writing on home and children, mothering and everything in-between. Constructed out of three sections—“x y z & &,” “notes for clothespin” and “genre scenes”—the poems in Quiet Book follow McCarthy’s previous poetry books—bk of (h)rs (Apogee Press, 2002), Verso (Apogee Press, 2004), Table Alphabetical of Hard Words (Apogee Press, 2010), Marybones (Apogee Press, 2013) [see my review of such here] and Nulls (horse less press, 2014) [see my review of such here]—for their formal invention and innovation, focus on women, mothering and the body, and themes of Medieval artworks and archives, armed with her fierce and fiery intelligence and an evocative musical cadence that sings through every line. As she writes in the short sequence that sits in the centre of the collection, “clothespin”: “the kiss is domestic is / domestic is kiss monumental // breech upon which / so much pinch [.]”

Originally produced as a chapbook in 2015 through Ahshata Press, “x y z & &” is a suite of thirty-three poems that explore and extend her work in collage and accumulation, stitching together scattered notes on parenting, language, nursing, childbirth and babies. McCarthy magnificently articulates the anxiety, distraction, exhaustion and bliss of parenting small children, as she writes: “I had four hours in a row alone / to work & I looked at photos of them / & remembered the limitless mistakes / it was possible to make with the piano.” And the structure of untitled poems composed as a suite also means it is possible to begin on any page, and read in either direction. In a 2014 interview at Touch the Donkey, she briefly discussed the suite:

I have a chapbook called ‘x y z &&’ coming out in the fall (Ahsahta Press)—it’s a sonnet sequence I wrote after my third child was born (I wrote a sonnet sequence after each child was born). One of the epigraphs is from Anselm Berrigan’s poem “Looking through a slant of light” : “Sending his mother to the typewriter / To type a poem that would embarrass him / Years later.” That’s my preemptive action on this front.

There are things related to the children that I do not write about because they are invasions of privacy, sure. It was harder when they were infants/toddlers because it doesn’t seem as though they have privacy when they are so little – it doesn’t feel like I have privacy during that phase either.

Obviously, I think they are brilliant & funny & clever—it would be impossible to resist them getting in the text.

The third section, “genre scenes,” explores the depictions of women in a variety of domestic situations and labours throughout Medieval artwork. A selection of fifteen pieces appearing previously as fifteen genre scenes (eth press, 2014), the twenty-four poems that make up “genre scenes” study historical depictions such as “woman nursing an infant with a child feeding a dog,” “& child, with apple tree & bread & doll” and “a woman scraping parnsips, with a child standing by,” that riffs off Nicholaes Maes’ 1655 painting “A Woman Scraping Parsnips, with a Child Standing by Her,” as she writes:

In a recent interview conducted by Christy Davids for The Conversant (posted December 2015), McCarthy writes:

So—with Quiet Book and thinking about the domestic—the poems in “genre scenes,” I mean I didn’t know very much at all about seventieth century Dutch painting, but I was a little bit in love with the idea of writing about those paintings while I was writing these poems about being pregnant and giving birth and having a newborn. Genre paintings—you know in the ranking of the French Academy of Fine Arts—it’s the middling genre, right. It’s: history paintings, and portraiture, and then genre paintings and the domestic—and they are small and not serious. So there was something perhaps perversely attractive to me about these paintings of people plucking ducks and deboning fish and nursing babies, and doing all this work inside the house. While I was writing these poems, I kept thinking about how we are sort of instructed not to take that seriously—‘mommy poems.’

There have been quite a stretch of poets writing on and around the domestic in intriguing ways over the past few years, allowing the small and smaller details of home and children as material for more language-centred writing, from Canadian poet Margaret Christakos to American poets such as Dan Thomas-Glass, Julie Carr, Rachel Zucker, Chris Martin and Farid Matuk, who’s chapbook My Daughter La Chola (2013) also appeared with Ahsahta Press. Given that home and children are so much a part of the days of certain writers, it seems almost impossible to not wonder why more poets don’t include such details in their own work. As McCarthy herself says in the interview, it was important to write “mommy poems” in such a way, despite knowing that the genre itself repeatedly gets a bad rap (despite so much evidence to the contrary). McCarthy provides material beyond the ends of the standard alphabet and into every parents’ movement into new and unfamiliar territory, writing the confusion, exploration and small and large discoveries beautifully, including two poems on the sometimes exhaustive and all-encompassing stretches of nursing: “milk fever cluster feeding witching hour / cluster feeding milk fever witching hour / witching hour milk fever cluster feeding / witching hour cluster feeding milk fever.” (“x y z & &”). Anyone with a small child or two, who is also interested in the language of great poetry, should be reading this. Or should I say: everyone.

genre : common
artifacts & its significance (if
any) is unknown

the gaze of the clothespin
falls on itself (“notes for clothespin”)