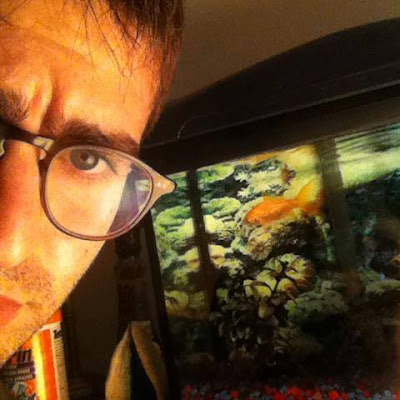 Nick Papaxanthos was born in Vancouver, and grew up in Lefkosia, Cyprus. He completed an undergraduate degree at Queen’s University in Kingston, Ontario, where he also co-edited a comedy newspaper and gigged with a jazz quartet. In 2014, he was awarded the John Lent Poetry/Prose Award. His first collection of poetry, Love MeTender, was recently published with Mansfield Press.

1 - How did your first book or chapbook change your life? How does your most recent work compare to your previous? How does it feel different?
The more I learn about the history of Canadian small presses, the more lucky I feel about my first chapbook, Teeth, Untucked with Stuart Ross’s Proper Tales Press. Proper Tales was born in ’79, about a decade before me, but it feels like my chapbook can share in those years I missed.

2 - How did you come to poetry first, as opposed to, say, fiction or non-fiction?
I wanted to write poetry after reading Nelson Ball’s At the Edge of the Frog Pond. I hadn’t realized poems could be so small, sometimes just two words, and each word did so much work. I saw it as a challenge and started writing my own poems. If Nelson Ball wrote fiction, then I might have come to fiction first.

3 - How long does it take to start any particular writing project? Does your writing initially come quickly, or is it a slow process? Do first drafts appear looking close to their final shape, or does your work come out of copious notes?
I used to write a poem’s first line pretty quickly, and the second didn’t take long either, but the third was still a couple minutes away, and the fourth would cross the finish line disappointed it wasn’t third, and the fifth would lose all motivation, arriving half an hour later. So I decided to write only first lines, which I stack into poems. Each is awarded a participation medal.

4 - Where does a poem usually begin for you? Are you an author of short pieces that end up combining into a larger project, or are you working on a "book" from the very beginning?
Paul Valéry describes the first line of a poem as a piece of fallen fruit on the ground. The poet finds this fruit and can’t identify it, doesn’t know where it came from. There’s no tree for miles. The poet begins to imagine the tree from which such a fruit would fall, and this is what completes the poem. I like this idea and I like Paul Valéry. And I worry I’ve only written cedars.

5 - Are public readings part of or counter to your creative process? Are you the sort of writer who enjoys doing readings?
In high school, I had a bad stutter. Sometimes I still have a stutter. A couple years ago, I made a big stuttery mess during a radio interview. I was reading a poem of mine about the tide going out like a toilet roll and the sun wiping the sparkling blue waves or some shit. Afterwards I felt sorry for myself, thinking the voice in my head and the voice in my mouth were irreconcilable. I don’t feel this way anymore.

6 - Do you have any theoretical concerns behind your writing? What kinds of questions are you trying to answer with your work? What do you even think the current questions are?
My writing does have theoretical concerns. They include, but are not limited to, questions of post-bebop meteorology, ostensible stencils, iconographite gestures, solemnity in the workplace, post-workout stretch-oriented philosophy, and climate change, how to avoid zipping up the green pa(nt)stures without ramifications on the clothing of future generations.

7 – What do you see the current role of the writer being in larger culture? Does s/he even have one? What do you think the role of the writer should be?
I thought I liked writers who constantly redefine their role, whatever that role may be, but then Jaime Forsythe, one of my favourite poets, posted on Facebook this excerpt from The Argonauts by Maggie Nelson:

8 - Do you find the process of working with an outside editor difficult or essential (or both)?
It’s very satisfying being edited by someone who seems to understand your work. Otherwise it’s like getting advice on how to make beef bourguignon while you’re drowning in a vat of chicken stock.

9 - What is the best piece of advice you've heard (not necessarily given to you directly)?
I like Kenneth Koch’s advice poems, like “Some General Instructions” (online here) or “The Art of Poetry”.

10 - What kind of writing routine do you tend to keep, or do you even have one? How does a typical day (for you) begin?
Every morning I plan a new routine by combining parts of other writers’ routines. For example, tomorrow morning I’ll have tea and then, at about ten o’clock, get under way and work until one (Simone de Beauvoir). I’ll write with a felt-tip pen on yellow or white legal pads (Susan Sontag) then go to UCLA and find a basement typing room where, if you insert ten cents into the typewriter, you can buy thirty minutes of typing time (Ray Bradbury). Finally, I’ll numb my twanging intellect with several belts of Scotch and water (Kurt Vonnegut) and sleep in the same room as the writing I’ve done for the day (Joan Didion).

11 - When your writing gets stalled, where do you turn or return for (for lack of a better word) inspiration?
I return to this poem by Ron Padgett (another advice poem) and I follow the advice.

12 - What fragrance reminds you of home?
Pencil shavings. So, maybe cedar.

13 - David W. McFadden once said that books come from books, but are there any other forms that influence your work, whether nature, music, science or visual art?
Once I ate an orange and wrote a poem about it, but the poem had nothing to do with the orange. But, you know, Dave McFadden ends one of his poems, “The English Sheep Dog,” with “I stopped writing, knowing / I hadn’t got to what I meant to say.”

14 - What other writers or writings are important for your work, or simply your life outside of your work?
Outside of my time spent writing, I like talking about writing, and writers who write about writing help me talk about it. Books like Mary Ruefle’s Madness, Rack, and Honey and Dean Young’s The Art of Recklessness.

15 - What would you like to do that you haven't yet done?
I lent my copy of Mark Laba’s Dummy Spit to someone. It’s been a couple months and they still haven’t given it back. I’d like to get it back.

16 - If you could pick any other occupation to attempt, what would it be? Or, alternately, what do you think you would have ended up doing had you not been a writer?
I play the piano and used to gig with a jazz quartet. If I wasn’t writing, I’d be giving more time to the piano. I listen to bebop, musicians like Barry Harris, Chris Byars, and Vera Marijt—and I’m envious of their relationship with music. But it reminds me why I write, too.

17 - What made you write, as opposed to doing something else?
Not owning a piano made me write. For a while I played imaginary pianos on various flat surfaces. Then a plank of wood gave me a splinter. The universe had spoken.

19 - What are you currently working on?
Promoting my new collection of poetry! Buy it here!