as soon as possible.
In my
hours, I find it is
very

private. It is very
private
to be in another’s
syntax. (“Into English”)

The latest from American poet Solmaz Sharif, following her Look (Minneapolis MN: Graywolf Press, 2016) [see my review of such here], is Customs (Graywolf Press, 2022), a collection of poems that masterfully examine one’s ongoing relationship with an adopted country and culture that requires constant adaptation, an America that seems to be built on the very foundation of reminding citizens that they don’t, or shouldn’t, belong. Sharif examines that painful space of absence, especially through the extended poem “Without which,” “A without which / I have learned to be.” Or:

and thus of it. 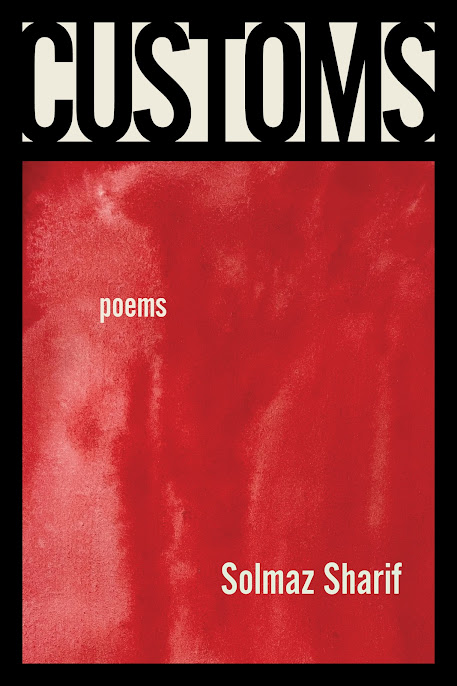 Her poems spool, and loop, return to movements monumental and jarring. Hers is a careful, considered lyric, one that slowly places one thought beyond another, composing her pauses and silences as carefully as her lines. Hers is a lyric of phrases, expositions and first-person narratives; a book of boundaries and borders, cultures and collisions, and of lines occasionally drawn in the sand. “Upon my return to the U.S.,” she writes, to open the poem “He, Too,” “he / asks my occupation. Teacher. // What do you teach? / Poetry. // I hate poetry, the officer says, / I only like writing / where you can make an argument. // Anything he asks, I must answer. / This, too, he likes.” Hers is a lyric of phrases and short turns, accumulations, pauses and open spaces. Sharif writes around the spaces left from and through absence, of belonging, exile, colonialism and othering. She writes of her mother as a young girl, opening the poem “An Otherwise,” writing:

Downwind from a British Petroleum refinery, my mother is removing the books she was ordered to remove from the school library. Russians, mostly. Gorky’s Mother among them. The Shah is coming to tour the school. It is winter.

In the cold, the schoolgirls line up along the front of the main building and wait for his motorcycle. Knee-highs and pleated skirts. Shivering in the refined air.