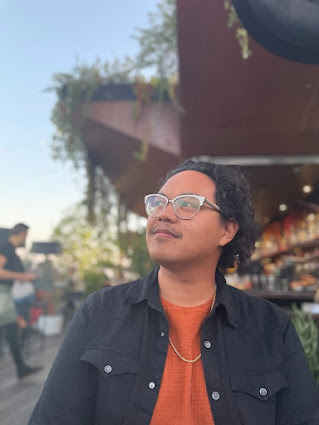 Adrian De Leon is a writer and multimedia educator from Manila by way of Scarborough, Ontario. He is the co-editor of FEEL WAYS: A Scarborough Anthology (Mawenzi House, 2021), and the author of the poetry collections Rouge (Mawenzi House, 2018) and barangay: an offshore poem (Buckrider Books, 2021). He is the co-host and co-writer of the PBS miniseries, A People’s History of Asian America. After completing two degrees at the University of Toronto, he now lives in Los Angeles, where he teaches Asian American Studies at the University of Southern California.

1 - How did your first book change your life? How does your most recent work compare to your previous? How does it feel different?
I wrote Rouge with the absolute freedom and knowledge that I’d never be a Canadian poet with any sort of readership. I wrote barangay in the face of knowing that people actually did read Rouge. But still, I consider barangay to be some of the most personal, most difficult, and best writing I’ve ever produced, inclusive of the other genres I worked in. Its contents help me mourn even today.

2 - How did you come to poetry first, as opposed to, say, fiction or non-fiction?
Hip-hop artists. I learned a lot of my English from 2000s rap, as well as television and movies, and young adult novels. But it was artists like André 3000, Twista, The Game, 50 Cent, and Jay-Z that taught me rhythm and cadence.

3 - How long does it take to start any particular writing project? Does your writing initially come quickly, or is it a slow process? Do first drafts appear looking close to their final shape, or does your work come out of copious notes?
Notes, clutter, and a lot of thinking over months and years. And a lot of conversations. I often think of projects in parallel, and when several seem to feed off of each other, then I write them together. Rouge was written alongside my honors thesis. barangay was written alongside my dissertation.

4 - Where does a poem usually begin for you? Are you an author of short pieces that end up combining into a larger project, or are you working on a "book" from the very beginning?
Book first, and this goes for all my projects. I start with the form or outline, or in the case of barangay, the central motif and its associated thought experiment. Sailing a native boat in the catastrophes that made the 21st century.

5 - Are public readings part of or counter to your creative process? Are you the sort of writer who enjoys doing readings?
I no longer enjoy doing readings for the most part, because I find white-dominated literary spaces to be incredibly unsafe and hostile.

6 - Do you have any theoretical concerns behind your writing? What kinds of questions are you trying to answer with your work? What do you even think the current questions are?
All my work tries to process two things. The work of mourning in a state of catastrophe is the first. And the second is how to write without needing to justify my fundamental humanity in white-dominated literary spaces.

8 - Do you find the process of working with an outside editor difficult or essential (or both)?
I love—nay, adore—editorial feedback. But with a caveat: it must come with a well-chosen editorial relationship. I worked with Wolsak & Wynn for barangay because I wanted to work with the inimitable Canisia Lubrin, whose feedback and further readings moved my artistic sensibilities beyond my wildest dreams.

9 - What is the best piece of advice you've heard (not necessarily given to you directly)?
The best and most equitable collaborations are with people who don’t need you.

10 - What kind of writing routine do you tend to keep, or do you even have one? How does a typical day (for you) begin?
Whatever falls in and around deadlines, or whenever my body is up for it. When I do end up writing, it takes place in binges, almost always at a café or a bar.

11 - When your writing gets stalled, where do you turn or return for (for lack of a better word) inspiration?
Deadlines. Self-imposed or otherwise.

13 - David W. McFadden once said that books come from books, but are there any other forms that influence your work, whether nature, music, science or visual art?
Film photography, mostly, as well as mathematics (especially topology), theoretical physics, and 90s and 2000s R&B.

14 - What other writers or writings are important for your work, or simply your life outside of your work?
My literary comrades and close friends, Natasha Ramoutar and Téa Mutonji. Pretty much anything they write, both for our bookshelves and our group chat.

15 - What would you like to do that you haven't yet done?
Buy a Wrangler and go off-road camping for a weekend.

16 - If you could pick any other occupation to attempt, what would it be? Or, alternately, what do you think you would have ended up doing had you not been a writer?
One day, I want to try being a mathematician again.

17 - What made you write, as opposed to doing something else?
As an immigrant kid, writing is where I first learned that language could be playful and political, and not just something that you’d be penalized for screwing up.

19 - What are you currently working on?
My first novel, which has me delightfully steeped in scary shows and movies as ‘research.’ Beyond that, working on my pescatarian cooking.