reading in the margins: Ernest Hemingway 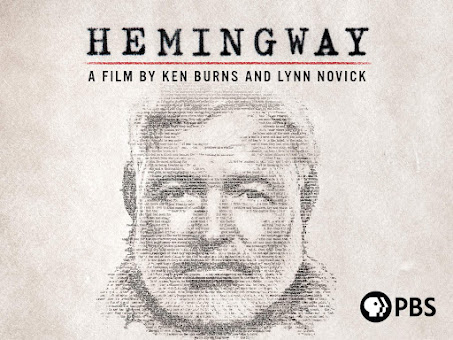 Across three consecutive evenings we watch Ken Burns and Lynn Novick’s 2021 documentary Hemingway, on the life and work of that most American of twentieth century authors. It is a great task to take on such an overwhelming figure, and I’ve long found Hemingway himself fascinating, even if his writing hadn’t any direct influence upon my own. That could easily be a rather naïve take, I suppose. When I think on some of my own early prose influences—Michael Ondaatje, Margaret Atwood, Timothy Findley, Milan Kundera, Sheila Watson and Elizabeth Smart—were they influenced by Hemingway? I’m sure, even if to do something other, they must have been. Offhand, I don’t directly know.

There were works of Hemingway’s I studied during my eastern Ontario high school days: The Sun Also Rises and the short story “Hills Like White Elephants.” Works that I realize, upon watching this documentary, I clearly didn’t understand at all. Perhaps I was too young, or too inexperienced a reader. Perhaps I felt too temporally removed, distracted by the period from which Hemingway wrote, that half century between publication and my then-teenaged self. Either way, I don’t remember any particular effect his works had on me, apart from his name. His name and biography. The weight of it.

In Ernest Hemingway: Dateline: Toronto, Hemingway’s Complete Toronto Star Dispatches 1920-1924, you can see articles such as “Trout Fishing in Spain” and “Trout Fishing in Europe.” I suspect one of these might have been a direct influence, years later, upon Richard Brautigan, in the pacific northwest. Brautigan’s Trout Fishing in America is an American classic, but as far from Hemingway as possible, and yet, the influence is obvious. Brautigan’s short, American sentences. His life-long interest in fly fishing and guns. One could say he was downstream, stepping into that same river. Even Heraclitus might have to admit to that one.

Have we one good Canadian sentence? Hard to know, given we don’t identify in the same way. Our sense of self is not as reliant on that same foundation of rugged individualism. Our storytelling, our mythmaking, is different. A Métis nation, as John Ralston Saul argued in A Fair Country: Telling Truths About Canada: our founding ideas a perfect blend of French, English and Indigenous, even as our policies perpetrated the ongoing thefts and genocides of colonialism.

I took notes as we watched the documentary, prompted by some of the conversation around Hemingway and his work; his insecurities, which snowballed into everything else. His drinking, his bravado and tall tales, his treatment of others, particularly women. My dear wife Christine found it difficult, and had little sympathy or patience either for Hemingway or for his seeming apologist, Edna O’Brien. At the end of the third episode, clips of the late John McCain, who had been interviewed on For Whom The Bell Tolls, almost seem to present Hemingway’s shortcomings as wistful, and not of an insecure man who lapsed from self-absorbed into self-destructive.

There’s a quote by Orhan Pamuk I read recently: “I read a book one day and my whole life was changed.” It is a straightforward enough quote, repeated for the sake of showing an example of the power of reading, the power of ideas and of story. And yet, what I’d wish to know from Pamuk: what was that book?

From the notes composed during the days watching the documentary, I crafted a new two page short story, “The snows of Mount Yamnuska,” attempting to play with some of the structures of Hemingway’s straightforward sentences, snow-capped peaks and human disconnection, although foregoing dialogue for density, as is my way. The story was completed that same week, with the voice of Jeff Daniels in my head, narrating throughout. If only.

Posted by rob mclennan at 8:31 AM
Labels: Ernest Hemingway, reading in the margins