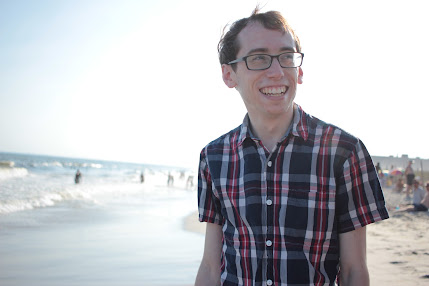 Patrick Roche is an award-winning poet, mental health advocate, and Carly Rae Jepsen enthusiast from New Jersey. He is the author of A Socially Acceptable Breakdown (Button Poetry, 2021). Videos of Patrick’s work have amassed 9 million views on YouTube, making him one of the most popular spoken word poets. Patrick has competed or been featured at multiple national and international competitions and festivals, including placing 3rd in the world at the 2016 Individual World Poetry Slam and 2nd at the 2017 Capturing Fire international queer slam. He has shared stages with Darryl “DMC” McDaniels of RUN DMC, Pitch Perfect star Brittany Snow, Everybody Hates Chris and The Walking Dead star Tyler James Williams, and Olympic Gold Medalist Chamique Holdsclaw. Patrick’s work has appeared in or been published by Button Poetry, UpWorthy, Buzzfeed, The Huffington Post, MSN, Beech Street Review, Gal Pals Present, Freezeray Press, Voicemail Poems, and his mom’s fridge.

1 - How did your first book or chapbook change your life? How does your most recent work compare to your previous? How does it feel different?
I first self-published a small chapbook shortly after college, when I realized that it might be a good idea to have some sort of merch if I wanted to perform at events in the wake of my first videos attracting attention. I really didn't have any idea what I was doing and threw together whatever poems I had at the time. It certainly gave me a crash course in a lot--from formatting poems for the page to deciding on an order to figuring out the details of physically printing the books. I've had another chapbook since then, which was published through a small press, and that helped me learn more about the process. But it wasn't until this full collection that I felt I had a better grasp on creating an emotional and narrative arc and a cohesive goal for a book. This collection feels fully formed and simultaneously more focused and more varied than my previous works.

2 - How did you come to poetry first, as opposed to, say, fiction or non-fiction?
I stumbled into it somewhat accidentally in college. I had written in various genres for fun as a kid, but after a bit of time in college, I started trying poetry more for a source of stress relief. I then found it to be useful for processing a number of experiences I was having in my personal and family life. Then a friend saw that I had written a poem and basically forced me to read at an open mic. I crossed paths with the new spoken word group on campus, and after joining and getting more involved with a poetry community, I fell in love with the art form.

3 - How long does it take to start any particular writing project? Does your writing initially come quickly, or is it a slow process? Do first drafts appear looking close to their final shape, or does your work come out of copious notes?
It varies a lot for me. If something very specific and visceral inspires me, something can come out quite quickly, but more often I find that I have an idea kicking around in my head--maybe a concept and a couple lines--and I'll mull it over for a while until something clicks and the floodgates open, at which point I usually pour out a relatively full first draft. Usually if something comes from an immediate source of inspiration, I end up editing that a lot more later on, whereas something I sit with for a while before actually writing ends up being a bit closer to a final draft. More recently, I've also been pushing myself to write more intentionally and actively, often using prompts (even if the prompt is just a single word).

4 - Where does a poem usually begin for you? Are you an author of short pieces that end up combining into a larger project, or are you working on a "book" from the very beginning?
Everything tends to begin with (and usually end with) personal narrative for me, so I invariably pull from my lived experiences. But usually a poem will "begin" with a concept--maybe I think "I want to explore religion and mental health" and end up getting a thought of "what would I be the patron saint of?" Then a poem starts to take shape out of that concept. Or I'll think of a concept of a persona or a reference point, like "I really want to write a poem about Hocus Pocus" and I'll brainstorm how to use that as a lens for something unexpected.

5 - Are public readings part of or counter to your creative process? Are you the sort of writer who enjoys doing readings?
I began my journey with poetry in the spoken word community and still very much like to participate in that community and that art form. Sharing my work with an audience will always be a huge part of my path as a writer, and I find that the possibilities of the stage and an audience open up so many more avenues for creativity and ways to play with the art of poetry.

6 - Do you have any theoretical concerns behind your writing? What kinds of questions are you trying to answer with your work? What do you even think the current questions are?
The question I've grappled with for a long time and which is at the center of this latest book is about shame. I want to challenge and question what it is that brings us shame, why it brings us shame, and how we can dismantle that shame and destigmatize topics including mental health, body image, and grief.

7 – What do you see the current role of the writer being in larger culture? Do they even have one? What do you think the role of the writer should be?
Generally, I think any artist tries to process and make sense of the world and our experiences or to add to and expand our understanding of the world. Writers, by nature of working with language, also serve to document--whether they are documenting stories, experiences, feelings, experimentations, desires. And, perhaps influenced by my background in spoken word, I think the writer also has a role of communicating and connecting. There is always an audience, whether in person or as a reader or even an imagined audience, and the writer creates a point of connection and hopefully makes an impact through that connection.

8 - Do you find the process of working with an outside editor difficult or essential (or both)?
It's very essential for me, as I struggle greatly with formatting and arranging my work on the page. A guiding hand in that process is very helpful for me. However, it can be difficult to remain objective and not become too protective of my work on an emotional level since so much of it is deeply person.

9 - What is the best piece of advice you've heard (not necessarily given to you directly)?
Honestly, even though it's pretty nonspecific, this quote attributed to Dolly Parton: "Find out who you are, and do it on purpose."

10 - What kind of writing routine do you tend to keep, or do you even have one? How does a typical day (for you) begin?
I've tried to introduce more of a routine or regimen in recent years, but I don't always stick to it as strictly as I would like. When I do, it usually means going to one of my favorite bubble tea shops (since I've found that I get too easily distracted at home), getting my lunch and drink, and sitting down for a few hours to work. I'll try to focus on a specific goal each time, like generating/writing a new piece or editing or memorizing something for performance or even doing administrative work of emailing or submitting work.

11 - When your writing gets stalled, where do you turn or return for (for lack of a better word) inspiration?
I've found prompts, while fairly simplistic, to be very helpful. I can get lost in my own head and too intimidated by the possibility of what I could write that sometimes I won't write anything at all. Giving myself something concrete as a starting point has been helpful. More specifically, I also look to pop culture a lot. If I find I'm struggling, I will find something in pop culture--a TV show, a song, a character--and use that as a reference point.

12 - What fragrance reminds you of home?
Probably chocolate. I always have chocolate around now because I've always had a sweet tooth. And my mother has always been an avid baker, so there's nostalgia associated with chocolate as well.

13 - David W. McFadden once said that books come from books, but are there any other forms that influence your work, whether nature, music, science or visual art?
I pull from a lot of different forms, largely ones in pop culture. I've written a number of poems inspired by music, including the songs of Carly Rae Jepsen, Billy Joel, and Rufus Wainwright. I have pulled from movies, TV, comic books, video games--pretty much anything that I've enjoyed in pop culture. I also pull from classical mythology thanks to my years as a Classics major.

14 - What other writers or writings are important for your work, or simply your life outside of your work?
Oscar Wilde has always been a huge part of my world. The Picture of Dorian Gray has been my favorite novel from the moment I read it as a teenager, and I went on to write my thesis in college on its connection to classical aesthetic philosophy. Beyond that, I have been particularly drawn to the works of other poets who started in (or had strong connections to) the spoken word scene. I've been fascinated by the ways in which people who perform on stage can translate their work to the page in a way that is similarly exciting and engaging.

15 - What would you like to do that you haven't yet done?
I would like to continue developing my solo stage show which incorporates poetry, storytelling, monologues, multimedia skits, improv, dance, comedy, and more. I was able to debut a version of it right before COVID shutdowns began, and I would really love to return to that pursuit.

16 - If you could pick any other occupation to attempt, what would it be? Or, alternately, what do you think you would have ended up doing had you not been a writer?
I would have been a high school Latin teacher. Alongside my Classics degree, I completed almost every part of the Teacher Preparation Program in college. All I had left was my student teaching, but then for a number of reasons (including needing a break for my mental health), I put that on hold. And then poetry swept me along. I'm grateful that I still get to incorporate my passion for education when I speak to students or conduct workshops.

17 - What made you write, as opposed to doing something else?
I really just fell into it, and then I found that it offered me the opportunity for healing and connection--internally and interpersonally.

The last great film: Barb and Star Go to Vista Del Mar, which was exactly the absurd, campy, joyful romp I didn't know I needed.

19 - What are you currently working on?
I'm excited to return to touring and performing live, so I'm working on bringing new pieces and new aspects of performance to my shows. I'm still working more on my solo stage show and hope to put on another production of it. And I have some ideas for a new chapbook concept, so I'll see how that pans out!

Posted by rob mclennan at 8:31 AM
Labels: 12 or 20 questions, Button Poetry, Patrick Roche