How long does it take
For the idea that the water is getting darker,
Thinner, to pass between twelve people
Touching shoulder to shoulder?

Alongside flushed car parts, an opera singer disappears
As steam over the sea. (“THE OCEAN AS IT SHOULDN’T BE”) 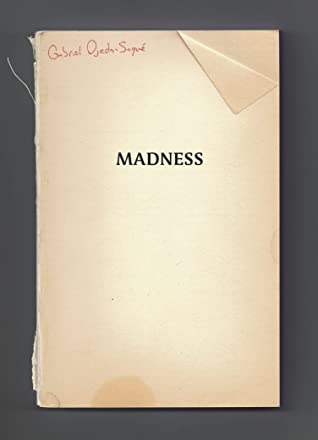 Chicago poet and editor Gabriel Ojeda-Sagué’s fourth full-length poetry title is Madness (New York NY: Nightboat Books, 2022), a selected poems set in the future, covering the work of a fictional poet. Subtitled “The Selected Poems of Luis Montes-Torres (1976-2035), Edited by Javier de las Palmas & Ángel de la Escoba,” this collection is heavily reminiscent of Toronto poet and filmmaker Lindsay B-e’s full-length debut, The Cyborg Anthology: Poems (Kingston ON: Brick Books, 2020) [see my review of such here], an anthology of poems set in the future, collecting the work of various periods of cyborg poets; a collection shaped around speculative fiction, exploring ideas of consciousness, being, artificial intelligence and technology. Through Madness, Ojeda-Sagué explores notions of literary fame and notoriety, moving across the contemporary and into an imagined future, one that looks back upon the present period. As the introduction opens: “Luis Montes-Torres was like a knot in a muscle; Luis Montes-Torres was like a hole in fabric. Both seem to be true. An always-active, hardened node straining towards something that isn’t there—or a little negative, an unwoven dot made by threads moving too far from each other or by some foreign object pushing its way through. He was a boring fire. This is the first selection of his poems, published twenty years after his death in 2035.”

So then, the fictional Luis Montes-Torres’s selected, “published in 2055,” includes an introduction by the editors, and selections from the author’s published works—HILLS & TOWERS, Hard Shot Press, 1996; AT AN ANGLE, Burning Deck Press, 1999; ALL THE LOVE BUSH, Pinned Flowers Press, 2002; THE OCEAN AS IT SHOULDN’T BE, Singrito Press, 2011; SAILING, Singrito Press, 2013; DICTATION, Quivering Duvet Press, 2024; HOLD ME TO IT, Half-Life Books, 2028; and SOME SHIELDS, Half-Life Books, 2032—as well as a selection of “LAST POEMS,” each selection of which includes a short editor’s note that blends the critical and the biographical, providing a framing for both the fictional writer and the work included. As one of these introductory notes offers:

An obsession with water patterns Dictation, which Montes-Torres and Quivering Duvet edited and published in the context of the two great California fires of 2024. His blog extensively covered details of the fires, including predictions and potential preservation strategies for fire safety authorities. “Writing,” he wrote in one blog, “is never made better by this, by devastation, by feeling that one is despicable, by this awfulness in the air. Regardless of what they tell you, art is never made better by all of this.”

I have to admit, I’m rather amused to see Burning Deck on Montes-Torres’ list of published titles (and who wouldn’t want a book published by Burning Deck, even fictionally?). Part of what Ojeda-Sagué does manage to accomplish is the ability to, through the form of speculative fiction, comment upon what might be otherwise difficult to do so of contemporary elements of climate, notoriety, mental illness, and literary accomplishment, as well as the world through the lens of the immigrant. Through the creation of Montes-Torres, there is something very freeing in the way Ojeda-Sagué composes this range of a life’s work, and this range of a life, offering the ebbs and flows of biography across an array of literary forms, from short lyrics to diary entries to longer stretches of prose. Ojeda-Sagué offers how writing is constructed, and a character as well, and how it all might begin to slowly unravel.