It does not start the way you imagine. The last breath is the first breath, the lungs stretched to their capacity, and yet too little air makes its way through. The breath hitched, strangers looking back to see you walking towards their backs, quick enough for your shins to stiffen, to forget you have a body long enough to make that last spring and catch the bus before it rushes off.

You sit up straight on the bus seat and avoid the white lady glares, but you’re sitting too straight and looking away with your neck in that crooked way, and you feel it shooting signals all the way down your back. Trading one avoidance for another.

The shame takes a backseat. When was the last time you had the luxury of forgetting about your body? (“Portrait Of A Body In Pause”) 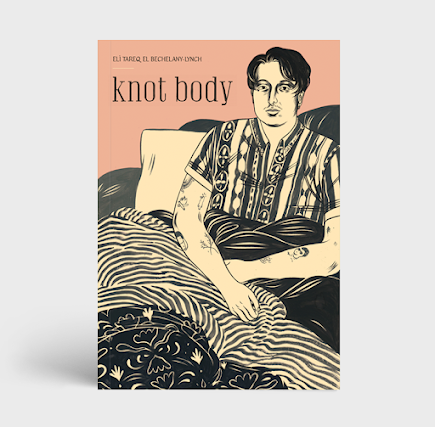 A collection I only picked up recently is Montreal poet Eli Tareq El Bechelany-Lynch’s full-length debut, knot body (Montreal QC: Metatron Press, 2020), a title that was subsequently followed-up with their second collection,, The Good Arabs (Montreal QC: Metonymy Press, 2021). The epistolary prose poem collection knot body focuses on illness not as metaphor, but writing disability, including chronic and daily pain, expanding the possibility of what has been termed “disability poetics” (following work by Nicole Markotić, Roxanna Bennett, Shane Neilson and multiple others); a body that for merely existing is considered political. El Bechelany-Lynch writes of the many layers and levels of endurance, attempting to comprehend how one might safely and comfortably live within the body. “The pain hovers above an impossible memory.” one piece begins, early on the collection. Writing a pain endured, and even lived, one might suggest. The next piece offers: “I worry that in writing this, I am revealing too much.” Written through a kind of direct and even stark tenderness, the poems of knot body examine the possibilities of a body that exists with constant pain, attempting to negotiate the daily elements of living in a world and culture that perpetually denies their existence. There is something really striking in these prose poems, in the way that El Bechelany-Lynch writes as a way to articulate the self into, if not being, but into an acknowledgment and a belonging; writing themselves into existence that, until this point, perhaps had been pushed into invisibility by just about everyone else.

For some writers, the memoir is a space of control, a way to reveal the facts they want to reveal, to share their stories so others know they are not alone, to share their stories in the hope that they are not alone. I try to learn from other writers, and give small parts of me, dropped into a glaze of fiction, fired twice over until the reality of it all changes colour, a lilac purple into raw clay brown. Charles Baxter says poets don’t particular care about the study of character so I guess he’s never met a poet. Tommy Pico would rip him to shreds. Mix around some random details and turn myself into a character, so far away from me that I can convince both you and I that nothing bad has ever happened to me.