This city is a labyrinth
I walk     in my head
another poet repeats:

“there is no space left in America,
there is only distance” (“A Letter in May: from Portola, San Francisco”) 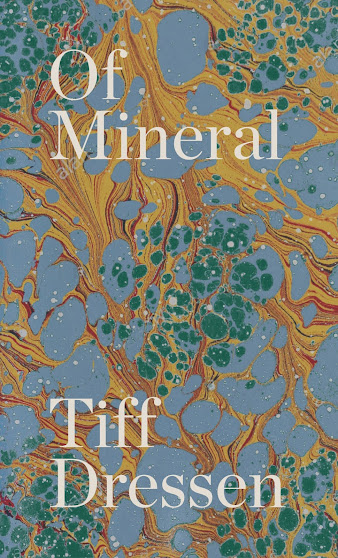 With a font that suggests the typed page and underlined poem-titles, there is almost the sense of the “manuscript edition,” suggesting not the idea of unfinished, but more akin to the living, ongoing document, in the typesetting of American poet Tiff Dressen’s latest, Of Mineral (New York NY: Nightboat Books, 2022). Dressen’s poems are composed via a lyric stretched beyond normal limits, from the accumulated thread of short bursts to a Creeleyesque point-to-point structure of narrative—short line upon short line down the page in a singular, extended thought—all of which follow one thought immediately upon another in a form nearly diaristic. “Could I not at random enter all,” Dressen writes, to open the poem “Earth’s Body,” “enter you openly / into her self or his self, or the mother and / father of selves, enter bedrock, // the silvered edge / sibilance, // diluvial medium of me—this speech secreted // I close your eyes, I hear the colors [.]” There is an intimacy and an urgency to Dressen’s lyrics, as lines and fragments meander across the landscape and days. Dressen’s extended lyrics find their roots in the slant language of their immediate world, and amid the examples of foundational poets, whether writing poems “after Frank O’Hara,” “after John Wieners,” “after Karin Lessing” or “in memory of Justine Kane,” the first of which offers: “I walk through / the rosemary to / smell the rosemary / I can’t see / your face anymore / where you should / have been I / see peonies” (“Poem for April 2014”). Dressen writes of minerals and foundations, as well as the roots of their own lines and poetic thinking. “We are all / speaking parts,” Dressen writes, as part of the extended poem “Fugue: a poem for multiple voices,” a piece dedicated “for Alan Turing (1912-1954),” that continues: