Some of it I’ve touched on already, some of it we’ve been circling since our first exchange, some of it this particular twelve days I’ve been feeling all over, messy and vivid and focused and vague: precarity, jeopardy, fear of loss. You felt some breeze of it, I think, that made you worry your letters were somehow insufficient or ill’ received which wasn’t the case in any way. I’ve felt a version of this worry, from time to time, too: what if in a letter or in a real-life scenario I’m stupid or insensitive or one of us realizes, meh, not so much, less than I thought.

I see from my earlier note to myself that I wondered also how much wish infuses this connection, this relationship sprung up between us, its listening and avenues for thinking through. But I don’t feel worried or even really wonder about that today, right now, as I actually write to you. Right now, I feel that this, our collaboration, which is a certain kind of companionship, is exactly as you wrote: an exactment of searching together with, to, through our microclimates, these presents, these I’s and you’s. (Lisa Olstein, July 19, 2018) 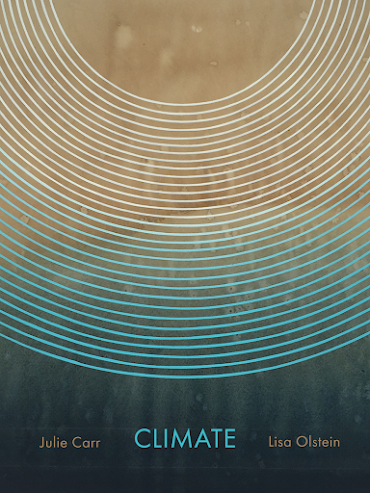 I’m very much enjoying the epistolary essays that make up Julie Carr and Lisa Olstein’s collaborative call-and-response, the non-fiction Climate (Essay Press, 2022). Writing to each other in a sequence of letters, Carr and Olstein write out their anxieties, fears and stories around #Metoo, climate change, parenting, school shootings, sexual abuse, Trump’s election crimes, a friend’s suicide, the Paris Climate Accord, and other events, documenting their experiences and fears as two women, two poets, writing directly to each other in an intimate space. “I have no stomach for violence.” Olstein writes, as part of “July 19, 2018.” “I stick on it—snag, catch, fray, fall apart. I think it’s normal, to a point. It’s something, it seems, that varies quite a bit person to person. Kindly, in an email, E. called it a form of empathy, my inability to stop imagining into the violence of Ian’s death, a way of trying to understand—both to literally register and to fathom.” Opening with Carr’s January 7, 2018 “Dear Lisa,” and ending on April 17, 2019, they write the space of sixteen months across American culture through a prose that at turns is breathtakingly beautiful, anxious, grief-stricken, supportive and deeply intimate, weaving in thoughts around literature, politics, culture and their daily lives. As Olstein writes as part of her entry for October 25, 2018, referencing the televised hearings before the Senate Judiciary Committee to confirm Brett Kavanaugh:

The wound of that testimony. The wound that is Facebook right now, that is my email queue, that is the steady stream of often nuanced and searing think pieces by women. The wound of hearing the cordoned-off voices of the pro-Kavanaugh women they keep digging up to interview. In my “bubble” it’s women split open, all wound. That Rukeyser quote has been going around again—what would happen if one woman told the truth about her life / the world would split open—but the problem is it doesn’t, the world doesn’t split, the woman does.

There is something of the call-and-response, two different voices responding and reacting, that is reminiscent of San Diego poets Sandra Doller and Ben Doller’s collaborative prose-work The Yesterday Project (Sidebrow Books, 2016), both writing in collaboration (albeit blindly) in the shadow of a life-threatening diagnosis [see my review of the book here]. Writing the multitude that “climate” suggests, the Carr and Olstein work through the events and news cycles that permeate their daily lives, writing a climate that would allow for someone such as Brett Kavanaugh to succeed, a climate of gun culture and repeated incidents of mass shootings, and the environmental damage that continues to be perpetrated upon the landscape, and every species set upon the earth. The book is also broken into sections that suggest thematic breaks, offering each section the same list upon each title page, but with different elements highlit, from “Bomb cyclone (Boston, MA),” “#Metoo (accrual)” and “Mass shooting (Santa Fe High School, Houston TX)” to “Package bombs (Austin, TX),” “Trial for sexual abuse, Larry Nassar” and “Women’s March (2nd annual).” This is a politics lived on the ground, as both are aware of how deeply affected either of them could be through any of this, whether the close proximity to a particular shooting, or witnessing the Special Senate hearings with Christine Blasey Ford through the lens of their own experiences. These events don’t live beyond their experiences or their immediate worlds, but are deeply connected across culture, in a way perhaps more deeply felt, and far better understood, by Carr and Olstein than by generations prior. As Carr writes as part of “November 2, 2018”: “If this were a letter in the mail and not over email, I’d send you a piece of tree bark. My poets all write sad songs, but they also keep believing in poetry’s ‘viewless wings.’ I never really understood why ‘viewless.’ Because poetry doesn’t see the suffering that it speaks of? Because you can’t see poetry’s power, though it’s there?” This is a book that documents grief and trauma across American culture in the immediate moments, existing within a conversation between two friends who are both poets, thinkers, critics and mothers, and articulating a deep connection between living and thinking with poetry and political culture. As much as anything, this book examines how deeply connected these seemingly-disconnected threads of politics, literature and daily life truly are and can be, in a lived sense; their lives propelled by the pure vulnerability of their open, thinking hearts. And that, by itself, is stunning.

You were writing about collectivity: how the work at NASA is no one person’s work, and that even failure adds to the whole. The other day, I was reading something a friend wrote about breath: how we breathe in common. He rejects the notion of the self, the notion of the human, is seeking something more radically in-common to define us. Breath. Earth. Soil. Every version of self is painful to us, he says.

My fingers stopped there, because I don’t know if he’s right.

But still, I would say that the collaborative nature of the Lab reflects something we do want, always, which is to fade away into the project and feel, if nothing else, our sentences as they move in a landscape.