Yesterday yesterday started. Movement in the bed, chronological. Fast morning and warm tea, getting colder in the carafe. A new project, a reality show. Each day, a performance of living. Each record, a matter. This is what it’s like to be here.

In collage there was a younger girl with attention problems who made a photography art project called “This is what it’s like in here” showing how sad it was to be her, sad little negligee and fake blood and sorry eyes. I always hated that line, that direction, that girl. Pity the animal.

This is what. Westerns with Joseph Cotton and Gary Cooper and the Preston Sturges actor who survived. No popcorn. Raw goji berry chocolate pieces. Cauliflower steak and tofu steak and wild rice and spinach salad. Lentil soup. Egg frittata with red peppers. Flavor tray. Gertrude Stein and Maria Damon. Bob Kauffman. Fanny Howe at the end of it all, her wild childhood now in pieces.

I emailed the doctor who didn’t get the slides of your original lesion, no word on the real diagnosis, no word on. (“July 18, 2014”) 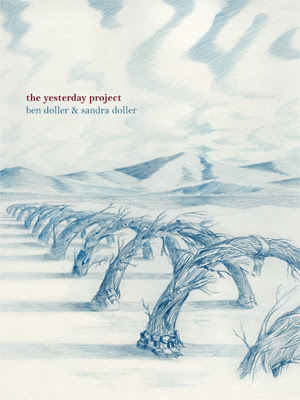 As the press release to Sandra Doller and Ben Doller’s collaborative prose-work The Yesterday Project (Sidebrow Books, 2016) informs: “The Yesterday Project finds Ben Doller and Sandra Doller undertaking a seemingly simple, stripped-down, though thoroughly brave and highly personal blind collaboration. Each separately wrote a document recording the previous day, every day, for 32 days, without sharing their work over the summer of 2014 in the shadow of a diagnosis of life-threatening illness: Melanoma cancer, Stage 3. The resulting work is a declaration of dependence—a relentlessly honest chronicle of shared identity and the risks inherent in deep connection.”

I’ve long been fascinated by response projects (or as theirs is, a “parallel project”) such as these, produced by couples who also write individually: Sandra Dollar’s books include Oriflamme (Ahsahta Press, 2005), Chora (Ahsahta Press, 2010) [see my review of such here], Man Years (Subito Press, 2011) and Leave Your Body Behind (Les Figues, 2015) [see my review of such here], and Ben Doller’s books include Dead Ahead (Louisiana State University Press, 2001), FAQ (Ahsahta Press, 2009), Radio, Radio (Fence Books, 2010) and FAUXHAWK (Wesleyan University Press, 2015) [see my review of such here]. As far as other poet-couples working on conjoined projects, one could point to Robert Kroetsch and Smaro Kamboureli, as she composed her travel journal, in the second person (Longspoon, 1985), and he composed his Letters to Salonika (Grand Union Press, 1983) as epistolary in direct response to her absence, or even Daphne Marlatt and Betsy Warland’s Two Women in a Birth (Guernica Editions, 1994), Patrick Lane and Lorna Crozier’s No Longer Two People (Turnstone Press, 1979) and Roo Borson and Kim Maltman’s The Transparence of November/Snow (Quarry Press, 1985) (Christine and I have been slowly working on our own, which we discussed here). In an interview posted at The Rumpus in November,2015, the Dollers talk about their collaborative project, and their crafting of an “androgynous shared identity”:

The Rumpus: How did the idea for this project come about?

Ben Doller: We were in a rough patch, as the book makes clear. I had been diagnosed with cancer (stage III melanoma), and our world suddenly looked very different. It was difficult to see the significance of writing amidst the shock and despair, and I think Sandra decided at some point that perhaps a collaborative, ritualized project could benefit us both in different ways. We had significantly and rapidly changed our lifestyle, and there was a desire to buy into homeopathic remedies and cures. I’ve never been a meditative sort—most of my writing is anxiety driven. I think that Sandra thought this project could be a sort of Trojan Horse to trick me into a more meditative approach to creative practice and, in turn, life.

Sandra Doller: The answer above is interesting to me. The way this project is. I like to hear the secret thoughts of my constant companion. Even if we think we’re communicating everything, we’re not. There’s always some surprise in the revelation, the articulation. I don’t remember it that way. Not exactly. I suppose factually—I did decide we had to do this. It’s a way of being alive.

Rumpus: There must be something fascinating about reading the secrets of the person you know best, even if those secrets are perceptions of your shared days together. Ben, your last name used to be Doyle, and Sandra, yours was Miller, right? How did you get the idea to meld your last names? Why was this important for you?

Sandra: We’d been together/married (same thing) for two years and when we moved to California we made a new name. We like to practice androgynous shared identity. This is ongoing. Although when Ben got sick, I had to realize we don’t share a body. And now, pregnant as I am, that is apparent in every way. We share a body and we don’t. We share a name yet people still assume I took his. My father addresses my mail to Mrs. John Benjamin Doller, which makes me lethal.

The Yesterday Project is actually their second collaboration, after The Sonneteers (Editions Eclipse, 2014), and where that earlier work (composed a decade or so prior to this current work) was a far more direct collaboration, this new project was composed as two distinct threads composed side-by-side, without either reading what the other had written. What makes the combination of the two threads curious is in seeing the parallels that float through such, as they both respond to their shared previous days, one after another, including their unspoken moments, shared outings and day to day tasks, and shared and individual responses and anxieties around Ben’s threatened health. Given there are two in a shared space writing concurrently, the project becomes an intriguing memory project, articulating the different perspectives, what either recall, and how, and what either might choose to highlight from the immediate day prior. The book also includes a series of wonderfully mundane details, from cooking, reading and simply being, some of which reveal the most astounding insight, and at other times, become almost self-conscious (“There are so many things I forgot to put in the yesterdays that would probably make better news.”).

I find it curious, also, that their prose styles match so closely, with only the occasional note or detail reminding which authored which piece (although Ben appears to compose his pieces with far fewer paragraph breaks, and both wrote their date/titles in different formats), which, according to the interview, was entirely deliberate on their part, stripping away their own individual styles. As they collaboratively respond: “And we did shoot for no tone. We talked a few times about writing in a not-trying-to-write kind of way. Not being clever, cute, sound-based, punny, poetic, or engaging any of our familiar writing habits or tics. This was difficult, but I think it changed writing for both of us in a permanent way. Just documenting. Just the facts. Though there is no such thing.”

Yesterday was the day that we met a person. She had a hot tub that her grandmother had handed down to her at her wedding, and it sat on her back porch for three years and now she had a baby and she wanted it cleared out. She was selling it real cheap, 175 dollars, and we found her on Craigslist. I think it was around noon or one o’clock. Previously we had eaten a smoothie and, I believe, some leftover rice and beans. I almost wrote rhythm and blues. Do I only know two songs that repeat yesterday predominantly, The Beatles and The Cure? The woman lived in Yukka Valley and her puppy had chewed on the side of the hot tub. It was enormous. It takes 20 minutes to get from Yukka from our place. Each corner was missing wooden slats that covered the tub guts. But the rest looked clean, very clean, except for the dusty top, which was very nice actually, under the grime, and underneath, which was filled with detritus. I could tell you wanted it. The woman was young, but she had a baby, and her husband had told her they couldn’t afford the $400 to hook the tub up. I could tell I wanted it. Too good of a deal, too great for our place in the desert, under the deep skies, soaking in warm water, listening to the coyotes cry. (“08.12.2014”)

Given their looming health crisis, there is an obvious anxiety that threads itself through their collaboration (the largest, admittedly, of a number of anxieties that run through the book, including: “I am trying to be better. I am trying to see people.”), one that most likely opens up the possibility for a deeper level of intimacy in composing the two sides of their conversation (and, despite the fact that pieces weren’t read by the other, these are pieces directed at each other, which make them very much a conversation; simply because the texts weren’t read doesn’t mean they weren’t communicating). This book might not have been originally intended for publication, but make for an incredibly deep and rich conversation between their private and public selves, both individually and together.

Yesterday we spoke a bit about this project, but later in the day, about who it could possibly be for, about the obligation, the vacancy, the things that are left out. Everything is left out. We do have sex. We do get mad. The project is not a project in complete transparency, rather, one in willful obfuscation. But we haven’t decided this. The first rule of yesterday is no talking about the yesterday. We shied away from it. I was pissed to have to go over it again, a day with family, a day with so many banal frustrations, none that I wanted to elucidate. But that was later in the day. Earlier we woke, and started getting ready to see my parents off. First plan was breakfast at Great Maple. My dad starting texting a bit early, I think they were worried about making it to the airport in time. I texted back, be there in half an hour. They had already pulled their car out when we got there, there was some anxiety. There was plenty of time. (“08.05.2014”)