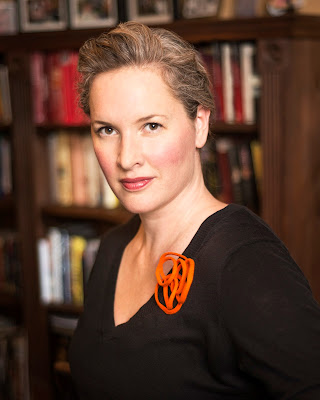 Elee Kraljii Gardiner [photo credit: Paul Joseph] directs Thursdays Writing Collective, a non-profit organization of more than 150 writers in Vancouver, Canada. She is coeditor with John Asfour of V6A: Writing from Vancouver’s Downtown Eastside (Arsenal Pulp Press, 2012), which was shortlisted for the 2012 City of Vancouver Book Award. She is also the editor and publisher of seven books from the Collective, most recently Voice to Voice: an anthology of music and transformation (Otter Press, 2013). Her efforts to foster writers earned the 2015 Pandora’s Collective BC Writer Mentor Award. Her poetry won CV2’s Lina Chartrand Award in 2011 and was a finalist for both Malahat’s Far Horizons 2014 Prize and the 2015 Robert Kroetsch Award for Innovative Poetry. Her writing is published in places including TCR, Event, Prism International, Lemonhound.com, Harvard Medicine Journal, and several anthologies such as ForceField (Mother Tongue), Walk Myself Home (Caitlin Press), Enpipe Line (Creekstone), Alive at the Centre (Ooligan Press) and forthcoming Ghost Fishing (Split This Rock). Her first book of poems is Serpentine Loop (spring 2016), from Anvil Press. A frequent collaborator, she teaches workshops on creativity and social writing. She is originally from Boston and is a dual US/Canadian citizen. www.thursdayswritingcollective.ca www.eleekg.com

1 - How did your first book or chapbook change your life? How does your most recent work compare to your previous? How does it feel different?
Serpentine Loop is my first solo book of poems but I coedited an anthology with John Asfour called V6A: Writing from Vancouver’s Downtown Eastside (Arsenal Pulp Press, 2012). I also edited and published seven anthologies from Thursdays Writing Collective. These books were my first experiences with the mechanics of bringing work to an audience and they introduced me to the steps between “idea” and “book launch.”

It has been superb – gentle and friendly – working on anthologies with co-editors and contributors; maybe I have fewer “first book jitters” because of that communal support.

2 - How did you come to poetry first, as opposed to, say, fiction or non-fiction?
I came to non-fiction first. I started using rough line breaks to keep the story from octopussing. I cleaved the lines, interrupted them. I used margins. The feedback I got pushed me to think about poetry. I wrote my first poem as a poetry adjunct at SFU’s The Writer’s Studio in 2008 and haven’t left poetry. Compression is the right thing for now. In terms of pragmatics and time management, I can’t imagine sustaining a novel. But poetry can be fiction; mine frequently is.

3 - How long does it take to start any particular writing project? Does your writing initially come quickly, or is it a slow process? Do first drafts appear looking close to their final shape, or does your work come out of copious notes?
The beginning is lightning. I catch an idea and collide it with an opposing setting or system. The writing is always fast. The marinating periods, when I let the words sit, are extended. Subsequent editing periods are frequent and awkward and totally engrossing.

4 - Where does a poem or work of fiction usually begin for you? Are you an author of short pieces that end up combining into a larger project, or are you working on a "book" from the very beginning?
This collection of poems is half genesis, or classic first book poems (bildungsroman!), and half idea/concept poems, which are also declaratory. I have a second book in the chute and a third under construction and both of those are have a mission statement, a reason for being what they are.

5 - Are public readings part of or counter to your creative process? Are you the sort of writer who enjoys doing readings?
The poem as I read it to myself in my head is different from the one on the page and from the one that I read aloud to other people. Readings are a visit with the work, like a spiffy date.

I love doing readings. I love the moment I sense the audience adhere to the words, when they soften to the performance and time slows down. I want to find that moment in every day.

Why are poetry readings so formulaic and why do we rigidly reproduce the structure? The convention of The Reading is bizarrely insider, almost hostile to the audience.

The tropes of the cadence are regimented too: “MFA” or “poetry” voice, or that slam rhythm we all know. They are very sticky and hard to pull away from!

6 - Do you have any theoretical concerns behind your writing? What kinds of questions are you trying to answer with your work? What do you even think the current questions are?
I love other people’s conceptual work but most times the idea suffices; I don’t need to read the piece more than once (or even once) to have the dance with it. If I am doing something conceptual myself the importance of process compounds - what am I getting from this discovery? The poem, then, is a history or photograph of that process.

Now I’m thinking about who speaks for or about whom and what politics are behind that and how to identify/alter the machines that support certain voices and muffle other ones.

Maybe a question I am working with is as simple as “can I make you feel what I feel?”

7 – What do you see the current role of the writer being in larger culture? Does s/he even have one? What do you think the role of the writer should be?
The writer’s role should be what the writer herself wants it to be. And the more answers to that second question the better. I want a writer to turn the cube of a common idea so I experience it from a different angle.

8 - Do you find the process of working with an outside editor difficult or essential (or both)?
Essential. Blindspots! Conversation!

9 - What is the best piece of advice you've heard (not necessarily given to you directly)?
“Separate the generating from the editing.” That’s from Betsy Warland, and I preach it hard.

“Calm down.” That’s from John Asfour, probably more about the writing life than the writing itself. It always makes me laugh.

“You can’t control the reception of the work.” From anonymous multitudes, and it bears repeating every day.

10 - How easy has it been for you to move between genres (poetry to fiction to critical prose)? What do you see as the appeal?
I don’t know. But I can’t really compare breakfast to lunch, either.

11 - What kind of writing routine do you tend to keep, or do you even have one?
There is no daily routine. There are cycles. Out of necessity I look at thinking about writing and even reading as arms of writing.

How does a typical day (for you) begin?

I write longhand two hours a week at a crowded table with about 20 people working in different genres. This time with Thursdays Writing Collective is a fountain for me – of ideas, syntax, disruptions, structures, questions. The rest of the week I write on my laptop wherever I am. I like writing with people while they are writing on the couch or at the coffee shop. I used to write while skypeing for hours with John Asfour. So companionable. So cozy to look up and ask a question and return to the work. (I am answering these questions sitting elbow to elbow with Daniel Zomparelli.)

12 - When your writing gets stalled, where do you turn or return for (for lack of a better word) inspiration?
I collaborate with people a lot and that is so playful and spark-full and productive. I think the only times I have been stalled I was pushing something into the wrong form. When I stopped binding things I stopped being blocked. Betsy Warland also passed on the idea of  “writing into the problem” when you are frustrated or stuck, which is useful and basically an escape ladder.

13 - What fragrance reminds you of home?
The linen closet. I used to sneak in during the day to sleep in the shelves.

14 - David W. McFadden once said that books come from books, but are there any other forms that influence your work, whether nature, music, science or visual art?
All of those. There’s a creative ritual I have that arose organically, surprisingly. Once a year I go to the Institute for Contemporary Art in Boston and cruise through really fast with my kids and sister and at least one of her kids. We fly. We usually have an hour max and we have the best conversations about “why is that art?” and “what the heck is that?” I keep notes, make sketches in a palm-sized book. I never leave without the knot of three to five poems.

15 - What other writers or writings are important for your work, or simply your life outside of your work?
My writing cohort at Thursdays Writing Collective is central. I get to think about concepts, how to turn them into prompts, choose texts, think about what I know and don’t know and then I get to hear immediate creative responses from engaged and committed writers. The knowledge at Thursdays is very deep and also very broad – I can ask a question about Rousseau or scientific farming methods or Métis language history and someone will know the answer. The writing temperature in that room is exploratory and confident and extremely supportive.

16 - What would you like to do that you haven't yet done?
I’d like to try spending a fat month at a retreat to see if my natural speed/rhythm, left to its own hungers, would assert itself over my writing and change it in any way.

17 - If you could pick any other occupation to attempt, what would it be? Or, alternately, what do you think you would have ended up doing had you not been a writer?
Musiciansingerdancerchoreographerlinguisttranslator. All at once.

18 - What made you write, as opposed to doing something else?
Books were my natural habitat.

20 - What are you currently working on?
Andrew McEwan and I are collaborating on “Nature Building,” a book-length project of poetry subverting the concept of pastoralism and Canadian identity.

[Elee Kraljii Gardiner is touring St. Catharines, Ottawa, Kingston and Montreal from April 26 to May 3, 2016]