Chris Martin, The Falling Down Dance

After we touch
down, next morning, we get October
sunburns in Transmitter
Park, pregnant
hipsters tanning elastic
rounds. The East
River Ferry goes both
ways, graffiti
accuses: YOU WOULD. First
our child was a raspberry,
then a prune, a peach, a fist, now
I fear the metaphors
have stopped. Little plural
urchin. Karaoke October I couldn’t
help bassing out
on Love
Will Tear Us Apart. (“Hunger”)

In his third full-length poetry collection, The Falling Down Dance (Coffee House Press, 2015), Minneapolis poet Chris Martin [see his “12 or 20 questions” interview here] explores fatherhood through meditative stretches that wander across a series of lyric specifics set within a longer, abstract flow. Following his first two collections—American Music (Copper Canyon, 2007) and Becoming Weather (Coffee House Press, 2011)—the poems in The Falling Down Dance occasionally read as wistful, composed as thoughtful and inquisitive takes on fatherhood, mortality, marriage, partnership and the intimate moments of watching your first child emerge, and evolve from baby into toddler. These are poems as rough sketches filled with curiosity, confusion and (an entirely normal) parental fear, as he writes to open the poem “Time”: “What / if these were / notes not / for something more / finished, but for something more / like ruins, not Gothic / Revival Horace / Walpole fakes, not stonewashed / jeans, but real ruins, lived-in almost / to death [.]” In an “Author Statement” included with the press release, he writes:

If The Falling Down Dance is more personal, more domestic, and more direct than any of my previous work, it is no less concerned with how strangers, friends, and family permeate our experience of the world, or, in the case of parenthood, begin largely to co-determine what that experience will be. The pressures of anticipation, confusion, and cognitive development create an experimental matrix where the time we share can be stretched, dilated, squeezed, and collapsed. It is a book about survival, about failure, and about what happens when we place the care of another human being at the center of our lives. 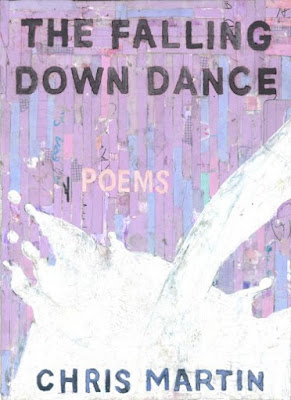 Throughout the collection, there are multiple poems titled “Time,” each of which holds a fine line between the long stretch of a moment, and how hours might simply disappear. “Snow is the conversation / winter makes with itself. No / quarrel, just endless / pretty tedium, blank / babble, the baby / making his thizz face / with a fistful / of white melting against / his quartet of teeth.” The book is thick with wonderfully-intimate details on pregnancy, birth and babies that you might only really comprehend if you’ve lived through the experience (such as the confusing fruit descriptions in the poem quoted above, a way that fetuses are described in some apps; such as knowing that in week twenty, your baby is roughly the size of a banana). I’ve been curious about the increase of poems on fatherhood over the past few years, including recent works by Jason Christie and Farid Matuk, for example (some of which I wrote about in my own four-part essay on fatherhood for Open Book: Ontario soon after our Rose was born in 2013), opening up a long overdue conversation on domestic/caregiving gender roles. Further in his “Author Statement,” Martin makes a curious turn, suggesting the difficulties, still, inherent in men being caregivers to their children, let alone possibly speaking or writing on such:

The Falling Down Dance is poised to join the burgeoning conversation about fatherhood and masculinity. What does it mean for a father to take equal responsibility for the care of a child? What does it mean for a man to face the difficulties inherent in caring for a child, to shirk the self-possession by which we recognize masculinity and let himself instead be possessed by a frail, helpless, suffering being? How does a man speak about the constant and necessary failure that accompanies the lessons of fatherhood, of parenthood, the labor in simply trying to be competent? In portraying both the boy and despair inherent in early parenthood, The Falling Down Dance gives every parent a new, lyrical window into that most treasured, ephemeral experience. We need poems like these to tell us how we felt, especially in those early days when being too alive obliterates and bends time, when memory can’t accommodate the onrush and overflow of feeling. We need these poems to recall for us what we learned, what we lost, and to remind us how the falling that is inextricable from falling in love can make us more compassionate, more impassioned, more human.

Given that men have been able to write poems about the domestic for years (from Robert Creeley to Phil Hall to Barry McKinnon, among so many others), the difficulties Martin suggests perhaps say as much about his thoughts on such as it might the climate (but I can’t, obviously, speak to his experience). There are more male poets writing on parenting now than there ever have been, certainly, and the idea of such conflicting with maleness, however present it may or may not be, would be an intriguing conversation on its own. Martin’s efforts have shown (one hopes, to himself, as well) that such is far more possible than he ever could have imagined.