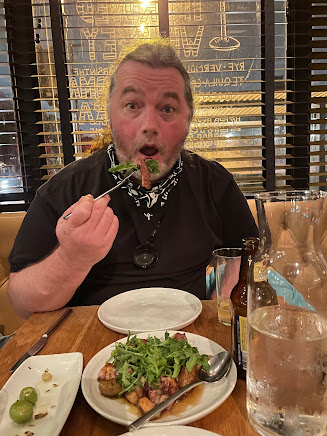 Garrett Caples is the author of several poetry collections, most recently Lovers of Today (Wave Books, 2021), and a book of essays, Retrievals (Wave, 2014). He is an editor at City Lights Publishers, where he curates the Spotlight poetry series. He has edited or co-edited books by poets such as Philip Lamantia, Frank Lima, Stephen Jonas, Samuel Greenberg, Michael McClure, etc. He lives in San Francisco.

1 – How did your first book change your life? How does your most recent work compare to your previous? How does it feel different?

My first book, The Garrett Caples Reader, came out in 1999. I don’t know that my life changed because of it, simply because that’s what I was trying to do with my life, be a poet, be a writer. But there was obviously a great deal of psychological satisfaction in having a book under those circumstances, and I was grateful to have friends like Jeff Clark, who made it happen. I would say the poems in that book are more purely form-driven than the poetry in my current book, Lovers of Today. I never think about form anymore; the form just naturally imposes itself as the poem goes along. But there are things in my first couple books I look back on now and think, how the fuck did I do that?

2 – How did you come to poetry first, as opposed to, say, fiction or non–fiction?

I would say I came to poetry last; I tried to write fiction in high school and college, but I wasn’t any good at it, even though I was already a good writer in a technical sense. A lot of becoming a poet for me was realizing that what I was actually responding to in literature, textures and tones, was more suited to poetry. I write fiction now, but it’s a result of being a poet, establishing a kind of voice to manipulate, rather than actual storytelling.

3 – How long does it take to start any particular writing project? Does your writing initially come quickly, or is it a slow process? Do first drafts appear looking close to their final shape, or does your work come out of copious notes?

I’m not saying this is true for everyone, but for me, “copious notes” are the death of writing. If I have everything mapped out, writing is a grind. Especially poetry. The poems are strongly improvisatory. The prose is often dictated by length; I have so many words, and have this many things I want to say about the matter at hand, so it’s a question of how to flow the piece so I can touch all of those things I want to say. Otherwise there are no answers to these questions. Some pieces are fast, some are slow, and there’s no rhyme or reason to it.

4 – Where does a poem usually begin for you? Are you an author of short pieces that end up combining into a larger project, or are you working on a "book" from the very beginning?

A poem usually begins as a few lines in a notebook or on a piece of paper, or ugh, my phone if it’s the middle of the night and I don’t want to wake my wife up. If it gets serious at all, it transfer to my desktop or laptop pretty quickly. With poetry, I never work on a book until it’s time to assemble one. I write poems and when there are enough poems and an opportunity to publish, I gather them up.

5 – Are public readings part of or counter to your creative process? Are you the sort of writer who enjoys doing readings?

Neither part of nor counter; they’re not really part of my creative process. At most I can glean if a poem doesn’t come across, but sometimes even then, it’s just the wrong room for it. If I stumble over something, it might mean there’s something wrong with a line that needs to be fixed. I don’t mind reading; I’ve given some good ones. But hardly think of myself as performing artist.

6 – Do you have any theoretical concerns behind your writing? What kinds of questions are you trying to answer with your work? What do you even think the current questions are?

Is this a good poem?

I don’t really think there’s “a role” for the writer; different writers do different things for different reasons. For myself, as an arts journalist, I tend to be most useful when I’m drawing attention to something or someone who deserves to be better known. As a poet, I try to be entertaining, as I think that’s a neglected area of endeavor in today’s poetic discourse.

8 – Do you find the process of working with an outside editor difficult or essential (or both)?

I’m a bad person to ask, as I’m much more frequently the outside editor rather than the author. I tend to do a lot of what an outside editor would do on my own behalf as a result. At the same time, I’ve enjoyed working with Joshua Beckman at Wave immensely, and I definitely sought and incorporated his input more this time around with Lovers of Today than with my previous book of poems, Power Ballads. Also Heidi Broadhead was fantastic to work with when we putting together my book of essays, Retrievals, and the amount of fact-checking and quote-checking they did was astonishing. Wave in general is a deluxe accommodation for a poet.

9 – What is the best piece of advice you've heard (not necessarily given to you directly)?

“If a poem isn’t written in THE ZONE, then forget it.” —Philip Lamantia

10 – What kind of writing routine do you tend to keep, or do you even have one? How does a typical day (for you) begin?

Unfortunately, I have to have a full-time proofreading job to survive, on top of my part-time job as an editor for City Lights, so I don’t have the luxury of a writing routine. I do it when I can for as long as I can. I’m sort of always working, which doesn’t feel great, but it’s the only way I’ve been able to get anywhere as a writer/editor. In March 2019, I published pieces in the Paris Review and the New York Times and I literally ended up in the hospital. I’ve since been trying to find a way to maintain my productivity without killing myself and I still don’t feel like I’ve figured it out yet. But even with the job, I feel like I’m doing what I want to do with my life, so I feel extremely fortunate.

11 – When your writing gets stalled, where do you turn or return for (for lack of a better word) inspiration?

As Tom Waits once said, I usually end up taking advantage of myself.

12 – What fragrance reminds you of home?

I’m not prepared to disclose this.

13 – David W. McFadden once said that books come from books, but are there any other forms that influence your work, whether nature, music, science or visual art?

Music definitely. I learned a lot about how poetry works from song lyrics, if I’m being candid. I’m thinking a song like David Bowie’s “Panic in Detroit,” that seems to flirt with a narrative as it moves from line to line, but there actually is no narrative you could articulate from the lyrics. There’s a lesson in that song about how to write a poem, or at least there was for me. I’ve taken some things from rap, in terms of working a syntax against a rhyme, or how to off-rhyme, or switch from one rhyme to another through free association. I picked up a lot from a song like “Light Sleeper” by Saafir and Hobo Junction.

14 – What other writers or writings are important for your work, or simply your life outside of your work?

15 – What would you like to do that you haven't yet done?

I’d settle for writing a few more prose books I’d like to write. I feel like I’m on the brink of a book of poet’s fiction, but it’s not long enough yet. Sorta fables in the Oscar Wilde sense.

16 – If you could pick any other occupation to attempt, what would it be? Or, alternately, what do you think you would have ended up doing had you not been a writer?

Urologist to the stars.

17 – What made you write, as opposed to doing something else?

I was good at it. I would have liked to be a musician, but I sucked at it.

19 – What are you currently working on?

I’m currently working on an interview with rob mclennan, but I’m almost finished.