Arleen Paré, Time Out of Time 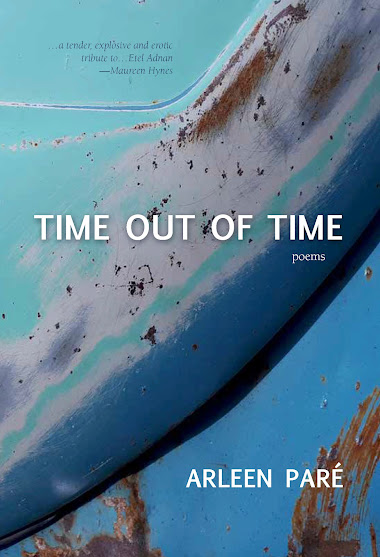 I was curious to see Victoria, British Columbia poet Arleen Paré’s latest collection, Time Out of Time (Qualicum Beach BC: Dagger Editions / Caitlin Press, 2022), a collection that takes as its immediate prompt of a particular work by the late Lebanese-American poet Etel Adnan (1925-2021). As Paré writes as part of a “Note from the Author” to open the collection: “In April, my poet friend Maureen Hynes suggested I read Time by Etel Adnan. It was love at first page. The poems in Time are spare and exquisitely structured. And then I discovered the remarkable Etel Adnan herself! […] In 2020, Time won the Griffin Poetry Prize. Fully smitten, I have employed the poetics in Time to shape this tribute collection.” (The note also offers that Adnan died just as the book was going to press.)

There’s something not only ambitious but ultimately daring in declaring one’s intentions at the offset: any reader could easily move to the source material and ultimately compare the two. Some things can’t be helped, I suppose. On her part, Paré is the author of more than a half-dozen published collections (although this is the first of her titles I’ve seen not published by Brick Books), including Paper Trail (Edmonton AB: NeWest Press, 2007), Lake of Two Mountains (London ON: Brick Books, 2014) [see my review of such here], He Leaves His Face in the Funeral Car (Caitlin Press, 2015) and First (Kingston ON: Brick Books, 2021). And while Paré isn’t Adnan (nor is she, through this collection, aiming or claiming to be), the shift in her own work through this collection is interesting: composed from the place where her interest and Adnan’s meet, and expanding upon those possibilities of influence. “This is what a blessing is,” Paré writes, to open the poem “A Blessing,” set between poems “33” and “34,” “forty years   waking up every morning side by side / leaving the house through the front door   enduring so little   a blessing [.]”

Interestingly enough, Etel Adnan’s TIME (New York NY: Nightboat Books, 2019) [see my review of such here], was my first introduction to Adnan’s work as well, furthering my own reading of her work with Shifting the Silence (Nightboat Books, 2020) [see my review of such here] before beginning to move slowly into her backlist, and echoes of influence have certainly rippled through my own writing, repeatedly, since. Which is to say, naturally, that I understand Paré’s impulse, and admire her ambition for taking on a book-length response to another book (there must be other examples, but I’m unable to think of any at the moment). Translated from the French by Sarah Riggs, TIME is constructed out of six extended lyric sequences that work through threads of meditative fragments across temporal stretches well beyond the immediate composition of the poems themselves, but across the length and breath of the author’s own nine decades of experience, yet with an immediacy that focuses upon the small moment in striking ways. Paré’s forty-nine part numbered sequence, “Etel Adnan,” makes up the collection Time Out of Time, set with the occasional other poem folded between, also works across those small and large moments, offering her thoughts on Adnan’s work and of the author, moving across a layering of how she reads Adnan’s temporality against her own: “I want to follow you / into your small / verbal squares / elegant   spare / enough cut / enough cut [.]” (“Etel Adnan 2”). In certain ways, Time Out of Time takes a while to lift itself beyond initial influence—nearly the first third, in fact—although there are moments from the offset that certainly sparkle. There is something quite magical in the fifth section, where she writes: “she  a small moveable organism / bespeaking hope / even when hope is in hiding [.],” but less so in the following section, that writes: “I now know what you look like / on Google / you smile / you are seated / you speak English Arabic French and / you write in all three / you paint / small squares of colour / you are now ninety-six / I know you best / in your small squares of mentation [.]”

Why is it so difficult to see the lesbian?... In part because she has been
“ghosted”—or made to seem invisible by culture itself.
—Terry Castle

In the last century   the twentieth   the late nineteen-nineties   everyone wanted
to be a lesbian   this may be an exaggeration   maybe not everyone   maybe not
Pope Saint Paul II or John Ashbery or Sarah Palin   but many   enough   lesbians
being the media darlings of that period of time   TV   magazines   photomontages
the lesbian at last   at long long last   becoming visible   transmuting the zeitgeist
a time out of time   refreshingly free of sham
if you can’t bring back the past
in time you can
bring forth the future.

From what I’ve seen of Paré’s previous work, her impulse is less the disjointed fragment than the narrative through-line, so in comparison, Adnan’s work offers a compactness and the suggestion of an otherwise-overt connective tissue between (although I don’t know if my comprehension of Paré’s writing is slanted through only being aware of her titles published through Brick). Moving through an exploration of the structure of Adnan’s lyric, Paré’s lines engaged with a particular level of sparseness, and the possibility of writing a narrative line across individual points that begin to accumulate, instead of a more overt narrative through-line. Time Out of Time writes out an examination of time, and of her own time, including climate, mass extinction and the forty years she’s spent with her wife, weaving elements in and around each other, both attentive and attuned, and simultaneously open-hearted and reserved. As she writes to open “Etel Adnan 22”: “you say on page 82 that the heart / sets up its own heart equations / I say you are nowhere in sight // concerning time / no one understands / its substance [.]” This really is a fascinating project, and interesting to see Paré work so deliberately and overtly beyond the boundaries of her poetics-to-date. It brings an introduction of a particular kind of abstract to her work as well, rippling across each page. “how would a rose be known,” she offers, as part of “Etel Adnan 33,” “without those four letters to frame it [.]” The real measure for this particular kind of project, in many ways, will be to see how Paré’s work moves forward from this point. I’m looking forward to it.