Told this is your mother,
whose coffined face you don’t know,
whose dress is a dress she’d never have owned.

You’d believe in spiders, though they too
occupy their own theoried world.
On ceilings, unfalling, they attach, reattach,
rappelling. Their silks
unconcerned with what gravity can do.

Your mother sat you, as a baby, in the shallows,
the lake licking your spine.
Her face then was all you needed to know.

There’s a photograph. Part of the web.
Everything beginning that moment,
untheoried, exposed. 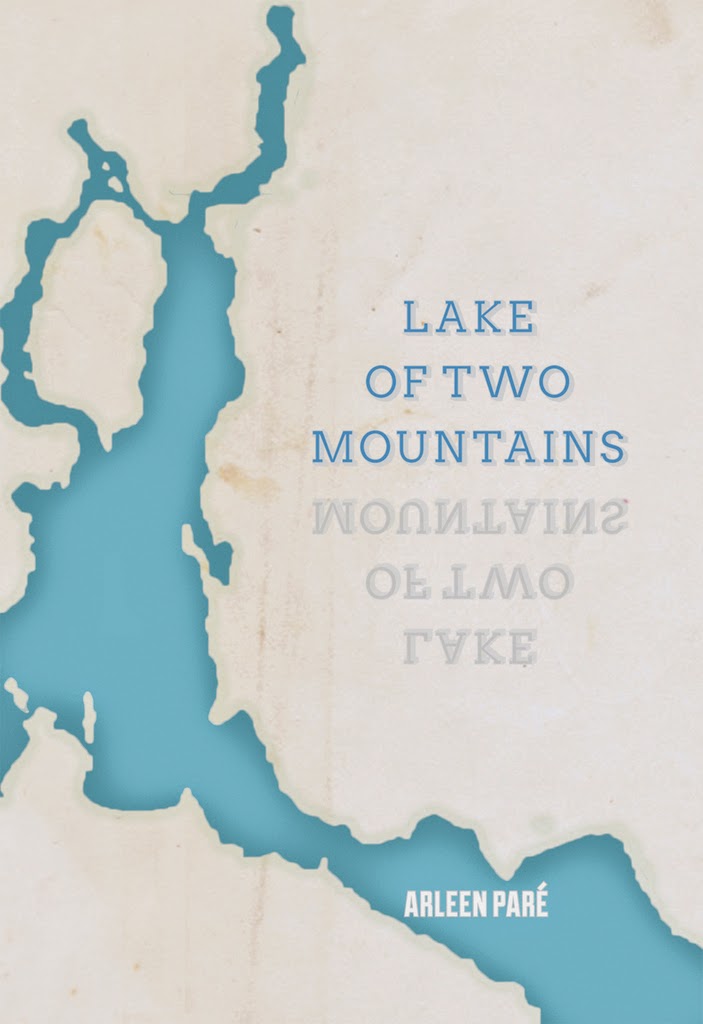 Victoria, British Columbia writer Arleen Paré’s third book and second trade poetry collection, Lake of Two Mountains (London ON: Brick Books, 2014) is composed as a portrait of a lake. Unlike other poetry collections on lakes, such as Michael Redhill’s magnificent Lake Nora Arms (Toronto ON: Coach House Books, 1993) [see my piece on such here], which was composed almost as a dream-portrait of a myth of a fictional lake, Paré’s Lake of Two Mountains explores the lake as a narrative portrait, very much engaged from a highly personal perspective, writing of family outings, gatherings and a variety of relatives, such as the poems “DAD IN THE LAKE” and “OLDER AUNT,” as well as portraits from childhood, amid the explorations into some of the historical threads that run through the region. Originally named lac des Médicis by Samuel de Champlain in 1612, Lake of Two Mountains, or Lac des Deux Montagnes, sits in Western Quebec, on the south-western tip of the Island of Montreal, and is where the St Lawrence River meets the Ottawa. The geography holds such histories as Samuel de Champlain, Brébeuf and the Oka Crisis, some of which Paré works to discuss in poems such as “OKA CRISIS,” that opens:

You saw the war start on your sister’s TV:
masks and camouflage gear. Before that,
you saw nothing at all.

Until you knew what it meant,
what could you know? High-school history,
blue textbook, Fathers Brébeuf and Lalemant.
From a distance, five miles or more,
what can be seen?

Two mountains, seen only from the lake’s centre.
Wherever centre resides. Absent
from nautical maps, and unnamed.

Island cottages morph into mansions,
mushroom the land.
Islanders don’t return to the city when summer ends. Anymore.
When summer ends they book a cruise to Cancun.

This is a very physical collection, existing as a kind of family photo album from a summer cottage, perhaps, over anything overtly political or critical of some of the more difficult and complex histories that run rampant through the area. Honestly, one shouldn’t criticize a book for not being what it simply isn’t, but there are parts of me that wish for a book that was less one that engages from the perspective of the cottage-dweller, existing as a kind of outsider to a region that includes Oka, for example. While even bringing such up might feel entirely unfair, I can’t help but feel such, with the exception of the poem “OKA CRISIS,” writing: “No one knows how hate works. No one knows / why the Mohawk / don’t own the land.” That short example might be among the sharpest, and most pointed lines in the poem, as Paré paints a portrait of a pent-up explosion at the long end of some difficult Canadian history, much of which exists more as a description that the reader is left to interpret and consider, without the interference of narrator. The second page of the three-page piece includes:

The reservation is a settlement
plus several lots in the town. Owned
by the Feds, purchased
from centuries of history.
Sulpician priests, City Hall.
Unceded by Mohawks
who keep living there, who claim it,
time immemorial, claim the pines that secure the small hill,
claim their dead buried under the pines.
And the fish,
and the fishing huts that stud winter ice,
raccoons and foxes, firewood chopped
from the trees, the narrow main road,
the farms and the horses, the Mohawk Gas station,
eggs, cigarettes, neon lights, warrior flags,
hand-painted signs.

Still, the collection is an intriguing series of portraits composed as a mix of the personal and the historical, moving easily between the lyric to the prose poem. Some of the most striking poems in the collection have to be the prose pieces, in which the personal “I” is reduced, and a far tighter and more focused portrait emerges, such as the seven “MONASTIC LIFE” poems that thread through the collection, the two “LAKE” poems or the five “FRÈRE GABRIEL’S LIFE” pieces. Somehow, these pieces, spread through the collection, are the poems that hold the entire book together, allowing for more personal poems interspersed throughout.

The lake harbours no greed. Rain comes, the lake simply receives. Rain comes in spring, and the ice, in plates and in discs, moves east, leaving crust and a thick, ragged skirt. Grit that falls through, trail of a fox falling in. Everything is poor. Rain comes, and wind. Wind like a cousin, not always kind. Wind-scrub and wind-wash, rough play and tease. Wind drags the lake’s floor, casts up what’s past dying. Swollen boards from fish huts, rented in winter, towed onto the ice, bird wings, broken at shore, rotten fish. The lake has nothing to ask, its ear cupped. Its hearing fills with nothing but rain. Water rises. Herons shrug in rock hollows, frogs wallow deeper in mud. Floods well. Lake opens up, gleaning, a chalice brimmed to the lip.