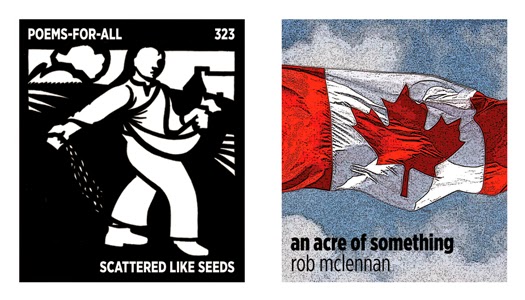 That lovely Richard Hansen has reissued all three of the mini-chapbooks (with new covers) of mine he produced a while ago through his poems-for-all series (see the whole checklist here). I've always been partial to the series, as it echoes some of the goals of the above/ground press "poem" broadsides, both attempting free distribution of poetry where those who might not have experienced a contemporary poem might discover. As he describes the series on his website:


They're scattered around town -- on buses, trains, cabs, in restrooms, bars, left along with the tip; stuffed into a stranger's back pocket. Whatever. Wherever. Small poems in small booklets half the size of a business card to be taken by the handful and scattered like seeds by those who want to see poetry grow in a barren cultural landscape.

He has produced three of mine so far, including #323. "an acre of something" and #324. "another moonlight" (both November 2003) and #1062. "Museum, pieces" (2009), all of which he has reissued. It's a lovely series worth paying attention to, and other authors with work produced in the series include Robert Creeley, Amanda Earl, Charles Bukowski, d.a. levy, Anne Waldman, Noah Eli Gordon, Pearl Pirie, Edna St. Vincent Millay, Diane Di Prima and literally hundreds of others. 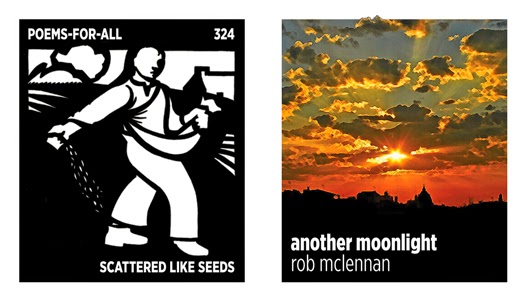