Please, No More Poetry: The Poetry of derek beaulieu, selected with an introduction by Kit Dobson 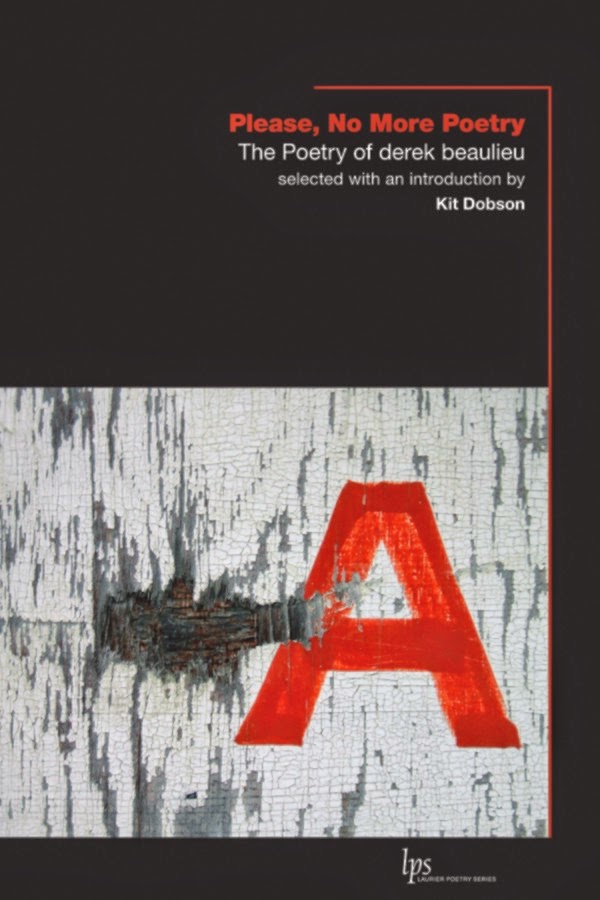 Not enough attention has been given to the fact that Calgary poet, editor, publisher, critic and new Calgary Poet Laureate derek beaulieu’s Please, No More Poetry: The Poetry of derek beaulieu (2013), the nineteenth title in Wilfrid Laurier University Press’ Laurier Poetry Series of critical selecteds, is the first work included in the series by a Canadian poet under the age of fifty (beaulieu was born in 1973). Simply that this new book exists, one might argue, highlights what beaulieu has accomplished throughout his artistic practice in a relatively short span. For this particular series, as well as The Porcupine’s Quill’s The Essential Poets Series of critical selecteds, the argument a selected poems appears to be, in part, introductory, allowing new readers an entry point to the individual writer’s body of work, and other authors published in the Laurier Poetry Series include Steve McCaffery, Don McKay, Fred Wah, Nicole Brossard, Di Brandt, Dionne Brand, Dennis Cooley, George Elliott Clarke, Lorna Crozier and M. Travis Lane, which equates to quite a hefty list of poetry by Canadian authors over the past few decades. Titles produced through the series have all included critical introductions and a post-script, most often by the author themselves, whether shaped as an essay or an interview, and this collection includes an interview conducted by critic Lori Emerson in 2012 on beaulieu’s practice. As he says in his interview:

Within the purview of conceptualism, there is a massive variation of individualized practice. All writing is expressive, either due to the semantic gestures or the compositional ones. The author function includes—as you said—elements of transcription, erasure, selection, and recontextualization. These are not radical compositional techniques; they are consistently incorporated into traditional poetic practice. In conceptual writing they are prioritized. My own conceptual work—like Flatland or Local Colour but also in How to Write—is the record, the detritus, of reading. Reading is a privately, and publicly, performative act.

Known throughout the small press for his own poetic conceptual works, derek beaulieu’s books include With Wax (Toronto ON: Coach House Books, 2003), Frogments from the Fragpool: Haiku after Basho (with Gary Barwin) (Toronto ON: The Mercury Press, 2005), fractal economies (Vancouver BC: Talonbooks, 2006), Flatland (York England: information as material, 2007), Local Colour (Helsinki Finland: ntamo, 2008), How to Write (Vancouver BC: Talonbooks, 2010) and seen of the crime: essays on conceptual writing (Montreal QC: Snare Books, 2011), as well as being co-editor (with angela rawlings and Jason Christie) of the anthology Shift & Switch: New Canadian Poetry (Toronto ON: The Mercury Press, 2005). His work so far has been presented, at least in book form, as a series of book-length conceptual projects, from the evolution of his short texts and visual and concrete works of With Wax and fractal economies, the conceptual language explored in How to Write, and the more expansive conceptual structures of Flatland and Local Colour. As editor Kit Dobson writes in his introduction to Please, No More Poetry: The Poetry of derek beaulieu:

The best example from beaulieu’s oeuvre is Flatland, a book that takes the 1884 novella Flatland: A Romance of Many Dimensions by Edwin Abbott Abbott (an unusual book in itself) and replaces the text of that book with a series of lines. These lines trace links from the first appearance of the different letters of the alphabet that appear on the first line of each page to all of the subsequent first appearances of each letter on the subsequent lines. It repeats this procedure on each page of Abbott’s text. beaulieu’s rewriting of Abbott’s novella is not a complete conceptual piece unless one examines the entire work, in which the procedure that the concept entails is worked through to its completion.

“It is within the realm of conceptual writing, however,” Dobson writes, “that I would particularly like to situate beaulieu’s work.” Over the past fifteen years or more, derek beaulieu has been one of Canada’s strongest and most visible champion of conceptual writing and concrete/visual poetry, and has, more than any other producer, publisher or critic, managed to bring each of these forms back into a larger conversation of Canadian writing, one that hadn’t really been as prevalent for quite some time, going back to the years of activity by the late, and much beloved, Toronto poet bpNichol (1944-1988). In his “12 or 20 (small press) questions” interview (posted January 3, 2011) discussing NO Press, beaulieu says:

If writing a poem is inherently tragic it is because it is hard to believe that the author had nothing better to do. It is inherently tragic because we still chose an outdated form as a medium for argumentation. If we had something to say would we chose the poem—with its sliver of audience and lack of cultural cache—as the arena to announce that opinion?

What has always been prevalent through beaulieu’s work has been the sheer physicality of it, in how his visual works turn a medium as clean as the printed page appear at different times rough, layered and deeply textured. Utilizing a variety of technologies, including digital, printmaking, Letraset, photocopiers and manual typewriters, he has managed to produce works that can’t help but feel as solid as any physical object, far more than most who work within visual and/or concrete forms. Please, No More Poetry includes a wide-ranging overview of his work in text and visuals, including more conceptual works, from a variety of his published works, and a healthy selection of works as-yet uncollected in trade form. Part of the conversation of his creative output is in exploring the possibilities of a poetic not limited to poetry itself, exploring how text can be presented as outside of language, and even playing up and over the boundaries of meaning itself. An example of such might be from the previously uncollected prose-sequence “from Extispicium,” that includes:

As beaulieu says further in his interview with Emerson: “In a lot of ways I think that the best poetry being written today is ‘not-poetry.’ Poetry, culturally, is waste—it is a discarded, non-productive site. Poetry, then, as I argued in the manifesto ‘please, no more poetry,’ has the most to learn from ‘non-poetic’ forms as a means of invigorating not only the language but also the cultural spaces in which it speaks. Poetry is by no means exhausted, but Brion Gysin was right: ‘writing is fifty years behind painting.’ Turning one’s back on art as an artistic practice is not without precedent.” Part of the conflict that has always emerged with poetry generally, and any more challenging works, including concrete and visual poetry, more specifically, has been in the difficulty many readers so often claim with the material. How does one approach such difficult work? Where does one begin? Given that such experimental and conceptual works haven’t entirely been prevalent throughout mainstream publishing, beaulieu’s fractal economies, wisely, included an afterword by the author discussing some of what he was exploring and attempting to engage within the form and traditions of concrete poetry. Five years later, beaulieu’s collection of essays, seen of the crime: essays on conceptual writing, a collection of “statements, essays, missives, and informal discussions,” argues for the genre itself, as much as for a number of its practitioners in more specific pieces. Anyone wishing for arguments for and an introduction to conceptual writing would be wise to find a copy of this collection of thirteen short essays (long out of print, but available free as a PDF at UbuWeb), as beaulieu critically explores the work of bill bissett, Rob Fitterman, Gary Barwin, Emma Kay, Gregory Betts, Kenneth Goldsmith, kevin mcpherson eckhoff, Dan Farrell, Caroline Bergvall, Gilbert Sorrentino, Craig Dworkin and many others working forms of conceptual writing, and providing context for works that rarely seem to get any kind of acknowledgement, critical or otherwise. It is as though, through his critical writing, publishing and editing, beaulieu’s work has been just as focused on creating a space for his work (and those of his peers) as much as on creation, as well as engaging with and acknowledging works by peers and mentors such as jwcurry, Steve McCaffery, bpNichol, Judith Copithorne, Bob Cobbing, Christian Bök, Darren Wershler and others. Please, No More Poetry is an essential critical overview of a poet working outside the boundaries of traditional poetic forms, and a worthy introduction to a larger conversation on conceptual writing. One just hopes there are enough readers willing to listen. Opening with the idea of a poet working “within a medium without using the medium itself,” Dobson’s introduction writes:

It is in such a context that we should be prepared to read the work of Calgary-poet writer derek beaulieu. beaulieu is a poet, but this statement reveals little. He is interested in the materiality of language, in the texture of letters and words themselves.