I place a photograph of my uncle on my computer desktop, which means I learn to ignore it. He stands by a tank, helmet tilting to his right, bootlaces tightened as if stitching together a wound. Alive the hand brings up a cigarette we won’t see him taste. Last night I smoked one on the steps outside my barn apartment. A promise I broke myself. He promised himself he wouldn’t and did. I smell my fingers and I am smelling his. Hands of smoke and gunpowder. Hands that promised they wouldn’t, but did. (“Personal Effects”) 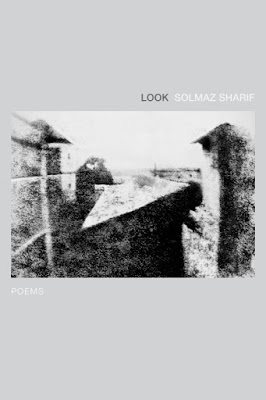 The poems in Solmaz Sharif’s remarkable first poetry collection, Look (Minneapolis MN: Graywolf Press, 2016) explore the difficulties of boundaries upon the citizen, writing out war in the Middle East, the war on terror and other devastations upon, by and through language, countries and people. An American of Iranian descent, she writes of lovers while utilizing the language of the American military and military operations, and a clash between cultures, actions and echoes, such as in the poem “Force Visibility,” that includes: “What is fascism? / A student asked me // and can you believe / I couldn’t remember / the definition? // The sonnet, / I said. / I could’ve said this: // our sanctioned twoness.” As the press release informs, Look “…asks us to see the ongoing costs of war as the unbearable losses of human lives and also the insidious abuses against our everyday speech. In this virtuosic array of poems, lists, shards, and sequences, Sharif assembles her family’s and her own fragmented narratives in the aftermath of warfare.” The poems collected here are incredibly powerful, and run with an easy cadence and patter that one might get lost in, and a sensitivity to love, loss and lament that is utterly human, generously kind and utterly heartbreaking. Sharif relentlessly critiques warfare and those who engage in it, and provides a human face to what is so often dismissed or overlooked as far as actual human cost, especially from the perspective of what the West insists on reducing and demonizing as “the other.” In an essay over at The Kenyon Review, she spoke of her work, writing:

When I am asked to describe my poetry on airplane flights, at dinner parties, I describe it first as “political.” Then, “documentary.” And these two things seem to, for some, preclude aesthetic rigor. But I am with Forough Farokhzad, who said, loosely translated, in an interview in the middle of the twentieth century: “what do I care of if no poem in Farsi has yet used the word ‘explode.’ Every direction I look, I see things are exploding.”