my Patreon patron-only blog : Obituaries (and how writing them sucks,

Since building myself a Patreon author page, I've also been posting to a password-protected patron-only blog. I thought it might be worth reprinting the occasional post here, for the sake of general interest. Perhaps it might be worth tossing a ducat or two towards?

Here's a post from a month or so ago: 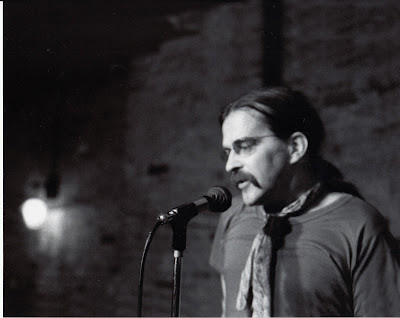 We lost Ottawa poet and musician Bill Hawkins [archival photo provided by Cameron Anstee, who did a lovely write-up as well] this week. That was a tough one, and a death I’m still reeling from, having not only known Bill as a friend since somewhere in the late 1990s/early 2000s, but someone I’d been fortunate enough to be able to publish: I took a tweaked version of the manuscript of selected poems put together by Noel Evans to Broken Jaw Press to appear as part of my ‘cauldron books’ series, appearing as Dancing Alone: Selected Poems 1960-1990 (2005)—the launch for which was the biggest poetry launch ever held, before or since, at the National Library and Archives of Canada, with some two hundred and fifty-plus in attendance—and we even produced a chapbook of new material two years later, the black prince of bank street (above/ground press, 2007). I’m pleased to know that I was also able to assist as co-publisher (with Christine McNair, who designed the book as well) of Cameron Anstee’s brilliantly and thoroughly-researched The Collected Poems of William Hawkins (Chaudiere Books, 2015), a book Bill was incredibly proud of (the first book he was finally able to dedicate to his mother).

Obituaries, generally, are tough to write. I’d read once that Robert Creeley offered that the (up to that point) last third of his writing career had been composing obituaries for all of his friends. I’d rather that than the other options, true. I usually drop everything and attempt to get something posted as soon as possible, in part to be able to notify the literary community, as quickly as I can, but also in a way that provides real information to who that writer was. Writing can be a tough enough game, and one filled with so much silence, especially from writers who aren’t producing new material regularly, that if we can’t tell each other when one of us dies, then the entire enterprise should be abandoned. I was a bit frustrated, for example, to only hear about a prairie poet’s death some months after she’d died; the writer’s organizations she’d previously belonged to hadn’t said a word, nor had her local community reached out to those same organizations. It feels important to inform.

I understand a certain part of it, “when one gets to a certain age,” and all that, especially as it relates to parents and other older relatives. But it still, occasionally, wears one down. I want there not to be death, I suppose. Or perhaps I don’t even mean that. When someone close to us dies, it is simply a new absence one needs to get used to, some of whom were tougher than others. Hawkins, Fitzgerald, Lavery, Suknaski, Tench. Siobhan. My mother. I had even made loose plans to meet up with Quarrington, at some point. All of that gone. What else can we do but commemorate, but acknowledge? If we aren’t working to record and remember, doesn’t that become disrespectful? How does one “honour their memory” through silence?

Or perhaps this is simply the same impulse that, for me, writing comes from: write it all down.