Triny Finlay, Myself a Paperclip

First it was for you, this world.

Jangle it like those coins in your front pocket.
Jingle it around. Loose.

Mindless sex in a crumbling clapboard house in the North Side|
while the cat digs at the mattress,
burrowed in the box springs: fey, vagrant rat.

I should have been a librarian of the day’s anxieties

– heat rash behind the ears, hair
slipping from knots
across and sinister.

I’m not a sideways glance.

Repeat: I’m not the past.

Just give me your patience with the cat.

At the other end of Queen Street, a Civic flips, spills
its sloshed and sleepless contents. (“You Don’t Want What I’ve Got”) 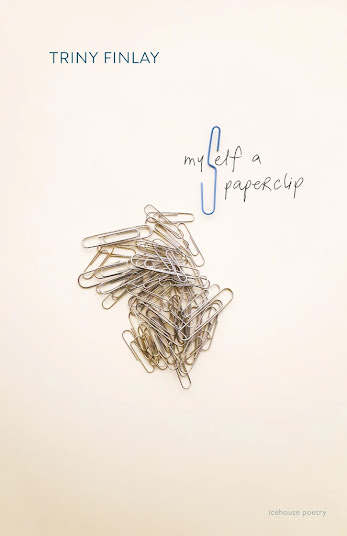 Fredericton poet Triny Finlay’s third full-length poetry title, after Splitting Off (Gibsons BC: Nightwood Editions, 2004) and Histories Haunt Us (Nightwood Editions, 2010), is Myself a Paperclip (Fredericton NB: Icehouse/Goose Lane Editions, 2021). Through the narrative lyrics of Myself a Paperclip, Finlay writes the intersperses, articulating a destigmatization of mental illness, simultaneously paired with an acknowledgment, acceptance and moving forward by moving through. Finlay writes of coming apart and reshaping, working through the shifts that medications prompt and allow, writing the light and the dark, and the uncertain journey toward a kind of balance. “When we changed my meds,” she writes, as part of “Adjusting the Psychotropics,” “I walked off a ledge backwards, / certain, uncertain. When we changed my meds, I fell into a soft / mallow field. // The friends were no longer friends. / The mums said, ‘Can you hold the baby while I pour the coffee?’ / The family said, ‘Never a dull moment.’”

Hers is a book of alternating structures, even from within the space of a longer sequence, composing short bursts of narrative focus in shorter poems, and again at the onset of longer accumulations of fragments before her line and her lyric is stretched out, writing hesitations and bursts, an exclamations amid multiple silences. She writes pauses, halts and bursts, writing a lyric notebook of experiences, of banality and balance. “Call it irrational,” she writes, as part of the extended sketchbook sequence “You Don’t Want What I’ve Got,” “mercurial. Wild / pink moons. It’s like / you’re not even trying. // Plucking guitar strings all ticky-tacky / in a high, unlikely room. // Wistful, hysterical. / And through the walls, wisteria.” She writes of #MeToo, and attempting to right herself after assaults from without and from within. She writes of lists and keeping score and keeping track. She writes poems that count backwards from ten, documenting progress, losses and frustration. The poems in Myself a Paperclip offer an open and direct account of her experiences through mental illness, one that is sharp, thoughtful and written almost as a notebook of slow return, as she writes: