The fiction moves in where the absence of real reckoning
leaves a space unaccommodated with the words
we have
for naming the
exertion taking place there. The commons. 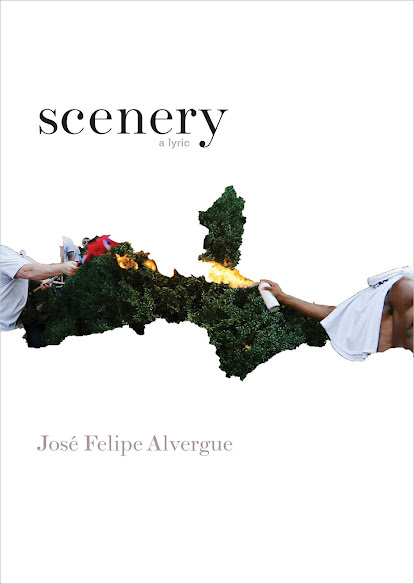 Wisconsin poet José Felipe Alvergue’s [see his ’12 or 20 questions’ interview here] third full-length poetry title—after gist : rift : drift : bloom (Further Other Book Works, 2015) and precis (Omnidawn, 2017)—is scenery, a lyric (New York NY: Fordham University Press, 2020), a book-length layering of text, akin, visually, to a scrapbook of archives, notes and effects. Utilizing language and language structure as the poem’s driving force, scenery, a lyric is an expansive, structural collage of text that writes on systematic racism, slavery and the prison industrial complex. “The convict becomes recollection, which labor / gives over to the grammatical. A body is bent and / turned weight on the shovel, a muscle pulls an arc / an extension at the hoe, the hammer.” Alvergue writes on an America torn between the ideals it claims to hold and the divisions of class and race, holding entire swaths of its own population as “other.” As he writes: “to what extent is his race the marker / of a consciousness, adaptive with the / world that springs in a cycle—history / and repetition and discipline—when / it has yet to be forced into position [.]” Alvergue’s is a lyric of investigation, composing sections on “CONVICT LEASING,” “RIOT,” “LYRIC” and “SENESCENCE,” attempting to articulate a lineage of long-held structures deliberately constructed or even repurposed to hold down and back and percentage of the population. He writes through an American history both foundational and contemporary, and the impact it can’t help but have upon not only his experience, but that of his children as well:

My son’s voice at times, pressing as it does to the limits of his body, is an investigation. How far will ribs expand. What is his. Who is it that is that his. Who is the one feeling skin stretch or the bones move. A word without contrast fills the rooms during his research. Like a cheek, or greasy finger imprinted against windows facing the street. Fills the smallest spaces between fur on cats, surprised by how voice might travel like fingers along their spines. His language is a filling that seems to not end until spontaneously consonants break the song of a voice. One that until then was the universe itself.

Alvergue arranges and breaks the edges of text via visual collage as well, akin to the work of Susan Howe, offering aesthetic overlay and overlap to denote breaks and contradiction. Through Alvergue, we see how language holds and breaks apart, from the language of legislation to one of empathy and compassion, two sides often set in direct opposition. “Despite my aesthetic obsession,” he writes, “I / don’t think there is a we who can / theorize genre without also what / sounds out after all the study. / What resonates and is systemica / lly real no matter what. The beats / following the disclosure of the / clearly sung cannot be archived / without the speed of capture. / Such a poetics would give form / to the collaborative, cooperative / speech from scenery as an act / against the humming of continu / ity. Such a poetics is elusive.” He writes of the conflict between legislation, human considerations and theory, writing the American Civil War to more recent events in Charlottesville, layering a legacy of division and racist action that culture has not yet been able to move beyond. There are no easy answers in Alvergue’s texts, yet it is the process of his very investigation that requires the reader’s attention. As he writes:

When a system has stopped
asking to be fed. This is a
death. There is a word for it,
senescence. Which is,
I think,
equal parts literal and
metaphorical. There is
a senescence to
any scenery looked upon.