I am a lifelong passenger, riding beside
Someone, or else behind them, with affection.
I like to fiddle with the radio, one way
In which I am a child today, happily captive
And the best songs I associate with being led.
Because of this passive relationship
To transit, I’m still terrified of driving—
Every time I get into a stranger’s car
Some part of me presumes an early death.
This me that dreads to leave the city, even
For an evening, is that same fanatical child
Who fears all lost when out of touch.
Ironically, I am a stalling correspondent
For the city offers its consumer feedback
In a there-and-gone game of immediacy
That tends to the nearest horizon. It distracts— (“VOICEOVER”) 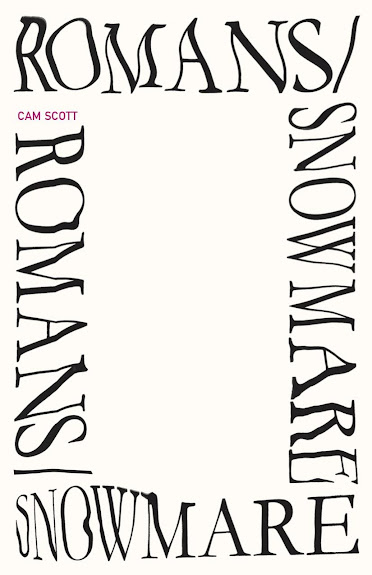 Having missed it when it first appeared, I’m just now going through Winnipeg poet and critic Cam Scott’s full-length debut, ROMANS/SNOWMARE (Winnipeg MB: ARP Books, 2019). As the back cover offers: “A daybook of anti-capitalist ideation and a homoerotic reinvention of the prairie long poem, ROMANS/SNOWMARE circles the perimeter of the self while drawing the communal inward.” Scott’s is an expansive poetic across eighteen poems composed in bursts, prose blocks and stretched-out entries that suggest a train-of-thought propulsion. “Leaving the fountain with wet hands,” he writes, as part of the second poem, “SNOWMARE,” “He slapped the surface of a January cold / And stuck. Indoors dissecting gonads / I was galled to find curled up inside // Homunculus. That all my life has been / Shambolic but I never broke the skin. / The regulation handprint fits a glove. / How we flatter the polis with song [.]” ROMANS/SNOWMARE is built out of eighteen poems, the first, third and ninth of which are “ROMANS,” blocks of text each less than two pages, set as possibly Greek chorus, or even palate cleanse, between poems built as longer sequences. Scott’s is a fascinating blend of lyric, lyric prose and language cadence, playing easily between the poles of meaning and sound, as the first of these pieces open: “First notebook with the pen Jen gifted me and I could hardly write more gladly, gliding word to word in alphabetical legato. But one can’t scratch in advance of landing. We rely upon our foes. Tomorrow’s forecast is an aid to fashion. She left the spare key in a pile of rocks. I’ll dig for that admission.” Further to that, the collection includes four ‘SNOWMARE” poems, set as second, seventh, eleventh and final in the collection; a linked-set that open as a sequence of untitled pieces before shifting the next into a sequence of prose blocks, and into the final poem, structured akin to the single page-plus prose-block of “ROMANS,” bookcasing single page-plus prose blocks on either end of the collection as a whole. In part, these structures hold the collection together almost as embankments, set up against the enormous force of his accumulated lyrics, staunching a flow that might otherwise burst. As the final poem reads: “Repetition without difference. Accumulation without qualitative change—fad diet as paradigm. It shouldn’t be this hard to find a place to piss outdoors. Then only shame prevents it. No one lives here anymore, we all serially rent. My mother casa is a suitcase. Uninsurable, the sum that is a city will remain.”

I was curious about Scott’s project in terms of the self-described extension of the “prairie long poem,” a structure of geographically-linked book-length (or beyond) open-endedness explored by prairie poets across decades, from Robert Kroetsch, Dennis Cooley, Aritha van Herk. Fred Wah and Monty Reid to Rob Budde, Nicole Markotić, Sylvia Legris and Todd Bruce to ryan fitzpatrick, Sarah Gordon, Jonathan Ball, Jill Hartman and Jon Paul Fiorentino, and into the Post-Prairie anthology edited by Fiorentino and Kroetsch (Vancouver BC: Talonbooks, 2005). Citing the “daybook,” a structural poetic diary one can see overtly through poets such as Jessica Smith, Robert Creeley and Gil McElroy (through his ongoing “Julian Days” sequences), and more subtly through bpNichol and Fred Wah’s use of the “utaniki,” Scott’s sketchbook writes his immediate and an immediacy informed by his geography and the social and political around him, but do not respond to directly, writing instead of it as air in the room, as part of the second “SNOWMARE” poem offers:

The city’s wakefulness, the glitzy sky
Obliquely allied to my farthest friends

Who say, with grave concern, where were you last night, when we almost
broke the record for the most pathetic reminiscence uttered sober in a
dream of death?

Resounds a silence. I am varying each of them—
His jaw, her chin, his upper lip and voice

The way he holds his station, even as nothing is asked of him. How he
clenches his fist on demand. I’ve known him so that any loss of detail is
beside the point. His entrance to a room

Sashaying tipsily as though:

Scott utilizes language to propel his lyric, one that includes echoes of Colin Smith’s writing [see my review of Smith’s latest here], through their shared attention to capitalism and language twists, a language propelled as much as by sound and cadence as by narrative thought, which itself pushes into and through further meaning (both poets are also situated in Winnipeg, it might be worth noting, and Scott offered a blurb on the back cover of Smith’s new title). Why are not more readers paying attention to the work of Cam Scott?

Brand eroticism of the dispossessed
Love in a corner stall

The city an abandoned carousel
Everything closes by night

Except the bars, where everyone’s
A mascot for their own desires—

An Irish pub next to
An English pub no enmity just

“No Nose No Hope In Here” (“THE UNSUMMONED”)