Oh, enema of the skin—
there is only one pome in this collection,
and it is this one:
a cross-legged inkblot
swaying on command,
triangulating $40 facial serum
into the langue of a
busy training day, learning
to oust a cop to deadland with
glistening brow and heavy-handed knuckleballing,
the kind of Molotov you wouldn’t
kiss your dermatologist with.

Your scratching up a
funky, funky mix of:
yes! We really do exist, we come from
sun dust and hashtags left clothe-pinned
in blime-nosing winter, where the noise
won’t cancel itself with nuance-blocking
butt plugs, blunt-shy of metaphor, lolling
into the meridian of a flaming
squad car.

Simply and overtly,
you make your parents proud,
but I’m just as loud.
I ask of you to polish my lens,
over and over again. (“How to Kiss Like a Spinozist”) 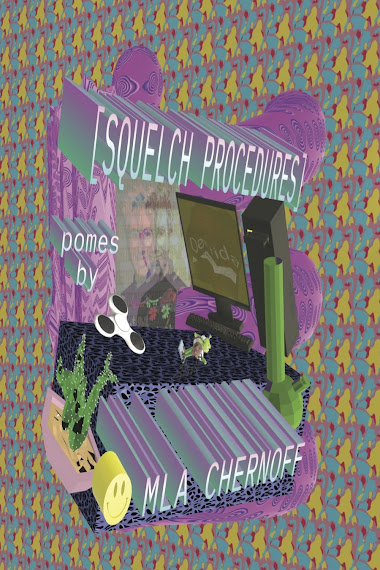 Toronto poet MLA Chernoff’s full-length debut, after the publication of a smattering of chapbooks and other ephemera, is [Squelch Procedures] (Guelph ON: Gordon Hill Press, 2021). I do like that there have been poetry collections that have appearing in Canada over the last while—Rasiqra Revulva’s debut Cephalopography 2.0 (Hamilton ON: Wolsak and Wynn, 2020) [see my review of such here] being another good example—that can’t easily be characterized or compartmentalized. There’s an incredible energy to Chernoff’s ongoing work, one that holds echoes of the polyphonic language and language-theory jangle-jumble gymnastic through sound and play of Canadian poet Adeena Karasick [see my review of her latest here] and even back to the work of Paul Celan. Words as they’ve been utilized prior are but a limitation one needs to move beyond, and Chernoff’s poems don’t even begin until well beyond this simple mantra. “Later-still I dunk my comrade, my opulence— / her name is Sailor Mercury / and I dunk her into the bowl and I / drink of her; I become her,” Chernoff writes, as part of the sequence “SQUELCH i (Mercury in Paris),” “into the bowl I go, / for a quick swirl / into the bowl, pipe-hot and chafing for a tuck, / if only for a lip-exonerated blip— [.]” There’s such a heft to Chernoff’s lyric, one that exudes a kenetic energy and phrenetic mishmash; Chernoff writes squelch as a way to crunch, squish, mangle, mash-up and tumble, roughshod over sentences.

There’s a simultaneous sense of enormous play and anxiety that writes of, around and through theory, sexuality, Jewish identity, social media and machine language, references to Stonewall, sound and image, therapy and multiple other directions, often multiple simultaneously. The strength of Chernoff’s poetic is the ability to move in so many directions while holding to a singular purpose, writing against impossibility into a language of complex thought. As the back cover offers, Chernoff “uses conflicting definitions of ‘squelch’ as a springboard to contemplate the vibrant, mawkish epistemologies that emerge in tandem with trauma, poverty, rigorously enforced gender normativity, and curbed childhoods.” There is an enormous amount going on in this work, and it is impossible to remain a passive reader. Referencing one of the poems that later fell into this collection as part of his interview over at Touch the Donkey, posted earlier this year, Chernoff writes:

Whereas “So, Thus” uses my own squelchy life as an anchoring point, my vispo is all over the place. It’s almost like constraint-based poetry without any constraint––a permafried succession of ‘pataphysical bleep-bloop click-a-dicks, with my silly ass hovering over the glitchy keyboard of my laptop at 4am, as Illustrator eats up all my RAM until everything crashes and I'm left with the autosaved remnants of my non-Euclidean monstrosities. It’s been very therapeutic, and much more energizing than anything I've ever produced.